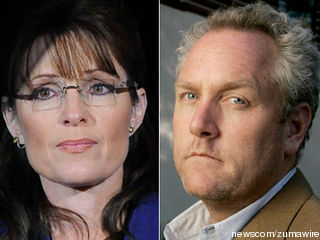 Greeted by the Tea Party as well as local and bussed-in thuggish astro-turf minions dispatched by Richard Trumka and President Obama’s Organizing for America, Andrew Breitbart once again showed what a courageous patriot he was during his introduction of Sarah Palin. Amid cheers of support and hurled insults, Breitbart roared to the forefront with bold and utterly truthful statements that labeled the progressives for what they are – unmitigated cowards. Nipping at Breitbart’s heels like rabid curs, the left’s desperation came through loud and clear after Governor Walker’s win over the Communist controlled union leadership in Wisconsin. Adding insult to well-earned injury, the final blow came as a Constitutionalist judge was elected in Wisconsin that will uphold Governor Walker’s budget.

Not caught adequately on camera (are you surprised?) were the names that Breitbart was labeled with. Who could forget the stupid, crass classic, “Koch Suckers!” along with the ever-popular middle finger gesture which belied the “breeding” of the progressives in attendance. Palin was called names that were befitting of a bathroom wall, penned in the vitriol of the conservative-hating radical left. Breitbart told the progressives to go to hell and rightly so. They would be right at home.

In the absence of crutches and props, most notably a teleprompter, Sarah Palin took the stage. John Nolte at Big Government put it well: Sarah Palin Steps Into Wisconsin, Points to Left Field, and Hits a Grand Slam. And indeed, she did hit her message right out of the park and across the nation, leaving the Marxist left eating her dust and cursing her presence as she ascends to the 2012 political stage. As I listened to her passionate, succinct and moving speech, I couldn’t help but feel that we were witnessing history. Not just for the Tea Party movement, but for America. She strongly supported Governor Walker and supported union workers, not union leadership. I can relate – I come from a union family myself. And in a common sense and plain-spoken pronouncement, she stated that Governor Walker was working to make sure workers get to keep their jobs and pensions, not lose them because of solvency lies and union politics.

Here is a woman with a spine of steel, who is not afraid to call the President of the United States a liar when the title fits. Palin took the fight to the left and stood in their fetid presence and fought like a girl. Like an “American girl” who has had enough and won’t roll over and watch her country slide into slavery and Marxism.

But she didn’t just go after Obama and the left. No… She threw red meat to the Tea Party and put the Republican Party on notice. Either do what we elected you to do, or you will sink into the unremembered bowels of history and you won’t even leave a ripple. Palin rang out with, “We didn’t elect you just to rearrange the deck chairs on a sinking Titanic. What we need from you, GOP, is to fight.” She defended Wisconsin’s own Paul Ryan and his bold and sane fiscal budgetary plan.

This woman is brilliant and knows how to play the game of politics without losing her soul. The left is terrified of her and rightly so. Palin is a force unto herself and is a true conservative in my viewpoint. Even Reuters gets it:

And I am sure the Tea Party feels as I do… As the majority of Americans do… We are coming for the politicians in 2012 and we intend to clean house of progressives on the left and the right. Game on!

14 thoughts on “Tea Time in Wisconsin”