Many American and Western patriots view financier and George Soros as almost the devil incarnate. 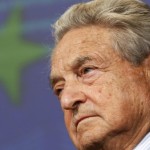 An inveterate funder of leftist causes around the world, and paymaster of the US Democratic Party, Soros is often seen as the puppet master of the Obama Administration and responsible for many of the problems that beset the West.

While I have no doubt that Soros is every bit as malevolent as his opponents paint him, I think it is dangerous to assume that he is at the top of the of the anti-American food chain.

It is important to know if Barack Obama works for George Soros, but even more vital to understand who George Soros may work for.

There is no doubt that Soros has heavily promoted communist and socialist causes in several countries. Is that because Soros hates America so much, that he is willing to fund its enemies? Or is it because Soros himself is part of a very much alive, but low profile communist apparatus?

Let’s look at that possibility.

Commentators have pointed out that in order for George Soros to have achieved what he did in his early days, he must have been favored by the communists. The following observations have been made by prominent Czech former dissident leader Petr Cibulka.

George Soros as a young man traded currencies on the black market during the Nazi occupation of Hungary. Soros lived there until 1946 when he left the country as it was under Soviet occupation and he, without money and at age of 16, ended up in London, U.K. in 1947. According to claims Soros has made, he left his native Hungary because of the Soviet occupation.

Simply said, this must be explained to the American public because these facts are not possible to be true under any normal circumstances. Soros admits to trade currencies on the black market, but that was always punishable by death during the Nazi era in any occupied country. Also what is important is the allegation that the Soros family collaborated with the Hungarian Nazi regime during WW2.

That would make the whole family [no doubt] a target of reprisals from the victims of the Nazi regime and the occupying Soviet forces would treat Soros’ family very harshly [most of the high level Nazi collaborators were hanged]. The only way out of this would be an agreement to co-operate with the GRU Soviet [Russian] military intelligence or perhaps also with the NKVD [later KGB] espionage.

Soros was not only able to “pass through” these check points, but he was able to cross the border to Austria, where the Red Army was also present at the time, and Soros was able to get through the Red Army check points in Austria and “defect” to the West all the way to London, U.K. Un-parallel achievement and because of my personal experiences as a political refugee who had to go through some difficulties escaping the communist oppression, I know what I’m talking about.

I don’t know how this Soros’ “life story” sounds to anybody, but this is impossible to happen unless George had a permit and proper Soviet approved passport, because if he was so brave to try to run these check points, he would’ve been shot dead on the spot by the communists.

His stay in the U.K. and his 1947 enrollment to London School of Economics, and to be able financially to support himself during that time, with no mentioned substantial help or financial backing and to be able to graduate in 1952 at that young age, this all gives me chills where I missed my own opportunities and how come I wasn’t able to be so “fortunate” and to have such “miraculous achievements” in my life.

That requires starting capital, these expensive ventures don’t come easy, these are not hamburger stands, but virtual banks with lots of money inside – who supplied the money to Soros or has he won a huge jackpot in Britain?

In his “Opening the Soviet System,” Soros recollects about his 1989 Prague meeting with communist Czechoslovakian leader Marian Calfa and says the following:

Together with Prince Karel Schwartzenberg we went to see Marian Calfa, who was then acting president. It was meant to be a courtesy visit but it turned into a moving occasion. Calfa opened his heart. He said that the last three weeks had really shaken his view of the world. He had not realized how far out of touch his party was with reality.

He had had an intimate conversation with Jiri Dienstbier, the former political prisoner and newly-appointed Foreign Minister, and that is when he found out that dissidents’ children had been regularly denied the right to be educated in Czechoslovakia. (Dienstbier’s daughter had managed to get to Switzerland.)

He was deeply ashamed and determined to establish democracy in Czechoslovakia. We all agreed that it was imperative to have Vaclav Havel elected president by the present rubber-stamp parliament; to organize a plebiscite would delay matters and create uncertainties.

Havel as president would consolidate the “gentle revolution.” Unfortunately, the leaders of the party do not agree with me but, as acting president, I have certain prerogatives and I intend to use them,’ he said. He sounded genuine and we were impressed.

It was an unbelievable situation: the head of an apparatus of repression which only a few weeks ago hit students on the head voluntarily abdicating in favor of a dissident without an organization who would have trouble winning a plebiscite.

According to Cibulka and Allan, Calfa was never a president, but a Prime Minister. He changed positions after he was for some years the Deputy PM in communist Czechoslovakia. The authors also make some interesting claims about Dienstbier:

Jiri Dienstbier – during the 1950′s and 1960′s, alleged KGB or directly GRU cadre, as communist journalist he was able to travel around the World during the communist era in Czechoslovakia. Between 1958-69, he worked as foreign political commentator and editor for Czechoslovak [communist] Radio. Between 1964-67, Dienstbier was the CZ Radio correspondent for the Far East and was in Jakarta, Indonesia at the time when there was [thank God unsuccessful] a communist coup.

In 1968-69, he worked as foreign correspondent in the United States, possibly for communist party newspaper Red Right [Rude Pravo]. A CPCZ member since 1958 till 1970, Dienstbier is a founding member of Charter 77, a speaker of Charter 77 in 1979 and later in 1985. After the “collapse of communism” in Czechoslovakia, he became Czechoslovak Government’s Deputy Prime Minister in a government of PM Marian Calfa and Dienstbier later became CZ Foreign Minister. While in his post as Foreign Minister, Dienstbier was involved in various scandals regarding appointing various “former” communists and STB agents [STB foreign espionage section mostly] as Czechoslovak Ambassadors around the World.

Circa 1978, Frantisek Janouch, “former” Czech communist and nuclear physicist, and George Soros were key financial backers of the Charter 77 Foundation in Stockholm, Sweden. It was asserted that the foundation was an “anti-communist” group, however it was sending funds to communist Czechoslovakia, Vaclav Havel and company. Janouch claims that Soros supplied 1/3 of the total amount of these funds.

On Dec. 14, 1989, Soros was present at the meeting in Prague on December 14, 1989 where he, Janouch, Karel Jan Schwartzenberg (later to become Vaclav Havel’s Chief of Staff) met with Czechoslovak newly appointed Prime Minister, a communist and allegedly KGB and STB agent, Marian Calfa. Calfa thanked Soros for everything he had done for Czechoslovakia.

Soros was also the main financial contributor to the Polish Labor Union called Solidarity. Its leadership had to be made up of members of the Communist Party, or of communist agents.

It is strange that Soros was allowed to set up his Open Society Institutions in the communist Hungary in 1984 and later in the Soviet Union in 1987. Such ventures were only possible for communists or communist agents and not for an American businessmen like Soros. The agreement between Soros and the communist government in Hungary had to be approved by the Communist Party General Secretary Janosz Kadar. Kadar was during the 1950s personally involved in torture and murders of anti-communist opposition members in Hungary.

Soros has been involved in financing organizations in South Africa since 1979, though most of the money he made came from his British Pound scheme in 1992. Much of the money went into communist dominated South African Unions and also to Cape Town University where Soros financed people who are today involved in the African National Congress/South African Communist Party government.

In 1986, Soros attempted to set up his Open Society Foundation in communist China.

I went to China [in 1986 – ed. note] with Liang Heng, who became my personal representative, and set up a foundation on the Hungarian model with Chen Yizi’s institute as my partner. Boo Tung, Communist party General Secretary Zhao Ziyang’s principal secretary, cut through the red tape and approved the foundation on the spot.

Both he and the foundation got into a lot of trouble as a consequence because his political enemies tried to use the foundation as a vehicle for attacking him. They prepared an elaborate dossier which claimed that I was a CIA agent and anti-Communist conspirator.

Boo Tung counter-attacked and presented voluminous information about my other foundations to prove my good faith. That was not too difficult because I had always been very open about my intentions and by 1987 I had also established a foundation in Moscow.

Nevertheless, some high party council decided to liquidate the foundation and refund the money. It took the personal intervention of Zhao Ziyang to rescind the decision. He arranged for Chen Yizi to resign as co-chairman and for the International Cultural Exchange Center, whose chairman turned out to be a high official in the security service, to take over as our host organization.

Cibulka asks exactly how George Soros, could prove, as an American citizen and therefore enemy of the communists, that he was NOT a CIA spy and anti-communist?

How is it possible, that the General Secretary of the Chinese Communist Party fixed the problem for Soros – “this wouldn’t happen unless (UNLESS) Soros is a communist agent himself and is involved in communist operations – otherwise they would never allow Soros inside the country nor would they allow him to open as much as a hot dog stand in a Beijing (or Moscow).”

All of this is circumstantial. There is no smoking gun that Soros was ever recruited by the Soviets or Chinese, only a pattern of association that should raise alarm bells.

Even worse would be to find that Soros is part of an East vs West war, that most Westerners thought died in the dawn of the 1990s.

Who does George Soros work for? Himself, or as yet unidentified masters?

The answer to that question, is vital to the future of the West.

For our KeyWiki file on George Soros, go here.

3 thoughts on “Is George Soros a Communist Agent?”