My goodness; but my last article, Mother Earth Rights – A Rose by Any Other Name, set off a firestorm of controversy. My Facebook account went off like a Roman Candle trying to “set me straight” for having expressed my summation of historical facts. Here’s what got some folks upset, enough to waggle a finger in my direction:

“America was founded upon Christian values. Our sacred documents include the Scriptures, Declaration of Independence, the Constitution and Bill of Rights. Individual rights are gifts from our Creator, not something Congress came up with. Our Constitution and Bill of Rights were put in place to protect individual God-given rights FROM Congress and the natural expansion of government powers. America only works if a majority of its inhabitants voluntarily uphold the principles of self-governance as set forth in these sacred documents.”

The first comment pointed me toward a treaty signed long ago. It read in part, “…treaty of tripoli submitted to the Senate by President John Adams, receiving ratification unanimously from the U.S. Senate on June 7, 1797 and signed by Adams, taking effect as the law of the land on June 10, 1797 states, “As the Government of the United States of America is not, in any sense, founded on the Christian religion….”

All I could remember about that time period and geography had to do with pirates taking advantage of ships at sea and how America took care of the problem by creating the U.S. Navy to protect vessels traveling in those waters.

I looked up the Treaty of Tripoli to get a better understanding of it. Sure enough, there is a statement expressing one of America’s first “Politically Correct” positions; should we be surprised, it was written by a career diplomat, Joel Barlow.

“Art. 11. As the Government of the United States of America is not, in any sense, founded on the Christian religion; as it has in itself no character of enmity against the laws, religion, or tranquillity, of Mussulmen; and, as the said States never entered into any war, or act of hostility against any Mahometan nation, it is declared by the parties, that no pretext arising from religious opinions, shall ever produce an interruption of the harmony existing between the two countries.” (spelling and grammar unchanged)

I thought it odd, at least momentarily, an obscure document of limited historical value would surface with precisely the perfect line required to counter my statement, “America was founded upon Christian values,” much less, within minutes of the article being posted. I don’t believe in “coincidence,” but this particular line appeared to give credence to the gauntlet thrown down. Had I been mistaken and was this the golden bullet to shoot me down?

My guess, based on having dealt with several highly educated “non-believers” on other topics; this was the “go to” answer; one which had been researched and saved by like minded non-believers over the years. A means to defeat anyone claiming the United States was founded on Christian principles. The fact that such a thought passed my consciousness led me to conclude my suspicions were spot on.

Students are routinely challenged to defend certain positions, theories and opinions; especially in public schools or places of higher education when the topic of religion comes up. If confronted with this “go to” answer an unsteadied person might throw in the towel and quietly admit defeat; such is not the case as will be unfolded below.

There were several articles under the heading “Treaty of Tripoli,” which shed light on the dangers involved with ships on the high seas and negotiations with Muslim nations involved openly in piracy. The most informative piece by David Barton included a considerable number of historical facts excluded in other reports which discounted the importance of Article 11.

“It would also be absurd to suggest that President Adams (under whom the treaty was ratified in 1797) would have endorsed or assented to any provision which repudiated Christianity. In fact, while discussing the Barbary conflict with Jefferson, Adams declared:

The policy of Christendom has made cowards of all their sailors before the standard of Mahomet. It would be heroical and glorious in us to restore courage to ours.

Furthermore, it was Adams who declared:

Adams’ own words confirm he rejected any notion that America was less than a Christian nation.”

President Adams was not bashful in proclaiming America to be a Christian nation; but since Adams signed* the “politically correct” document, a document intended to mollify several hundred years of hatred between European nations of dubious Christian adherence with Muslim nation states harboring blood thirsty pirates; well, you don’t have to be a rocket scientist to read between the lines and figure out the purpose for Article 11.

Another comment pointed the way to the Avalon Project which contradicted the authenticity of Barlow’s translation of the Treaty of Tripoli, the version used by non-believers to discount American links to Christianity. According to the document on file in the National Archives there is no reference to an Article 11.

“As even a casual examination of the annotated translation of 1930 shows, the Barlow translation is at best a poor attempt at a paraphrase or summary of the sense of the Arabic; and even as such its defects throughout are obvious and glaring. Most extraordinary (and wholly unexplained) is the fact that Article 11 of the Barlow translation, with its famous phrase, “the government of the United States of America is not in any sense founded on the Christian Religion,” *does not exist at all. There is no Article 11. The Arabic text which is between Articles 10 and 12 is in form a letter, crude and flamboyant and withal quite unimportant, from the Dey of Algiers to the Pasha of Tripoli. How that script came to be written and to be regarded, as in the Barlow translation, as Article 11 of the treaty as there written, is a mystery and seemingly must remain so. Nothing in the diplomatic correspondence of the time throws any light whatever on the point.”

It would seem history has been “toyed with;” a generous way of saying somebody wished to create a slippery slope of doubt regarding America having been established on Christian principles.

While looking for enlightenment, either for or against the idea that “America was founded upon Christian values,” it was remarkable how many negative articles Google had listed. A goodly portion of articles espoused excessive loathing for anything religious or conservative in nature; but having used Google for other searches, the top listed results didn’t surprise me, a telling statement on priorities.

The idea occurred, much as in the movie, Miracle on 34th Street, each side could parade an endless supply of factoids to defend or attack the statement. Were there any historically undeniable facts which could be counted on to settle once and for all my claim, “America was founded upon Christian values?” The answer came out, probably not.

Those who refuse to believe the Scriptures have the same reaction to historically recorded facts if recorded by one with an opposing mindset. It wouldn’t matter if I had John Adams on digital recording, boldly proclaiming America as the Lord’s chosen nation. No, it wouldn’t sway my detractors one iota. Fat chance of finding such a recording since it had not been invented at the time. No employee of the U.S. Postal Service was going to haul sacks filled with date stamped testimonies from each of our founders.

One of the books in my personal library came to mind as I read the various challenges to America having been founded on Christian principles, The Christian Life and Character of the Civil Institutions of the United States, by Benjamin F. Morris. It had been a while so I dusted it off and speed read a few chapters from the beginning. (Below is a scanned image of page 46, please click on it to enlarge.) 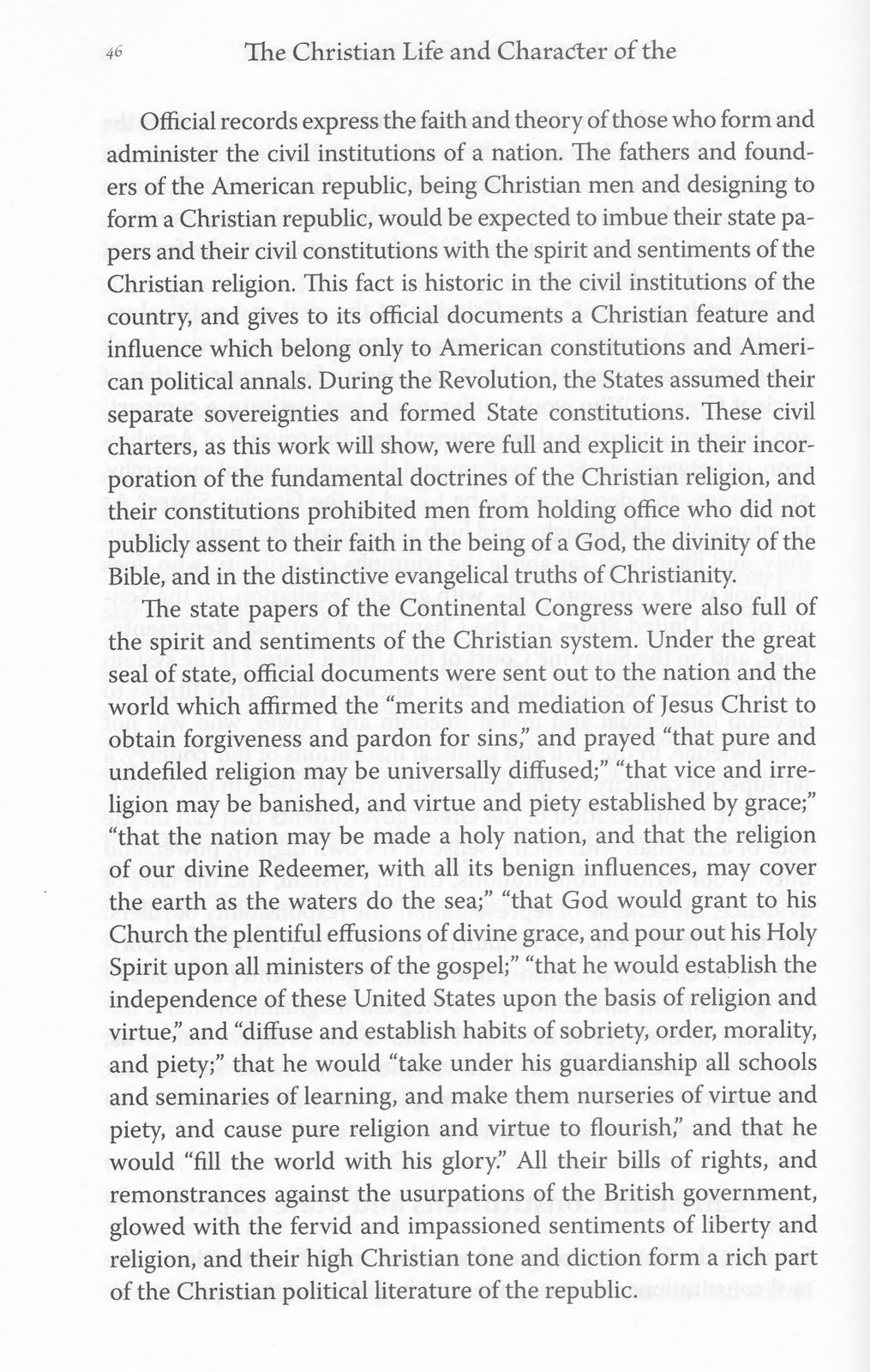 Quoting from state papers of the Continental Congress, predecessor to our Constitutional Republic, try this statement on for size.

“…that the nation may be made a holy nation, and that the religion of our divine Redeemer, with all its benign influences, may cover the earth as the waters do the sea:”

Maybe it’s just me; but it would seem to go far beyond “implying” America was founded upon Christian doctrine. Remember; this is part of our nation’s official record.

As you glance over this one page, be aware, the book contains 1060 pages with similar historically accurate accounts which could only be understood to mean exactly what my short opening summary recorded, “America was founded upon Christian values.”

3 thoughts on “We Started Out a Christian Nation”