Several hundred people gathered for a solemn vigil at the Iranian Mission to the United Nations on Sunday afternoon May 1st in New York City to commemorate Holocaust Remembrance Day. Snapping in the breeze was an Israeli flag held aloft by participants, and several feet away stood six burning torches representing the six million Jews murdered by the Nazis during World War II. Single handedly spearheading the event were Lynne Bursky Tammam and her husband Nessim of Great Neck, New York who organized buses from Long Island and other points outside of New York City to transport rally participants as well as arranging for a sizeable contingent of Jews from the former Soviet Union to be present.

Supporting the rally were such organizations as the New York Association of Holocaust Survivors, Amcha-Coalition for Jewish Concerns, Americans For A Safe Israel (AFSI), the Jewish Political Education Foundation, One Israel Fund, Stand With Us, Z Street, and the Zionist Organization of America. Organizers indicated that the objective of the gathering was to “protest the spread of defamation and libel against Israel and the Jewish people, threats against Israel’s existence and funding for international terror by the Iranian regime”.

Railing against Iranian President Mahmoud Ahmadinejad’s infamous denial of the Holocaust and his direct threat to liquidate the State of Israel, the speakers launched acrimonious charges at “the cesspool of hatred” which has come to define the United Nations. Decrying the “hypocrisy of the UN and the whole world”, Rep. Nadler declared, “we must take any action to insure that there is no second Holocaust” and excoriated Teheran’s incipient nuclearization by saying “all options should be on the table”.

“Remembering the Holocaust is quite commendable, but what is needed now is a bold plan of Jewish activism”, intoned Assemblyman Hikind. “Our enemies are closing in on us at blinding speed and our very existence as a people is at stake and no Jewish organizations have offered a concrete plan of action”, he said. Mr. Hikind referenced his mother who is a survivor of Auschwitz and said, “Today’s Iran is no different that Nazi Germany. They want to exterminate us as did Hitler and due to their technological advancements they can accomplish their nefarious goals much faster than we think.”

As a former member of the Jewish Defense League and one who is unabashedly proud of his activist roots, Mr. Hikind ruefully observed, “We are an orphaned generation. What the Jewish community is sorely lacking today is authentic Jewish leadership that was epitomized by Rabbi Meir Kahane, of blessed memory. We need organizations and leaders who can mobilize thousands of Jews to take to the streets near the United Nations in September and declare our collective outrage over the proposed unilateral vote on the creation of a Palestinian state that is sworn to destroy Israel and the Jewish people.”

Lauding the courageous work of “such amazing people” as Lynne and Nessim Tamman who “took it upon themselves to get people out today”, Mr. Hikind said there is hope for the Jewish people as long as we become inspired by “the example of these two people and do everything in our power to take bold steps for our survival.”

Also the son of a Holocaust survivor, Rabbi Allen Schwartz of Congregation Ohev Tzedek warned that “Ahmadinejad wants to visit a new Holocaust on Israel while denying the veracity of the Holocaust that happened 70 years ago.” Noting the close proximity of the dates on the Jewish calendar of Yom HaShoa and Yom Ha”Atzmaout, Rabbi Schwartz recalled the ultimate optimism of the biblical prophet Zephania saying the task of the Jewish people is “to transform Yom HaShoah (Holocaust Remembrance Day) into Yom Ha’Atzmaout, (Israeli Independence Day) a day of darkness into a day of light.”

“Israel, which sends healing across the world in times of crises has become a pariah state”, said Rabbi Yaakov Lerner of the Young Israel of Great Neck. Adding that “Amalek lives on” in the form of Ahmadinejad and others who represent an existential peril to Israel, he exhorted the rally participants to continue to speak out against Jew hatred without fear of world retribution.

Rabbi Dale Polakoff of the Great Neck Synagogue stated, “Remembering the Holocaust on Yom HaShoah is a misnomer. We must remember the lessons of this chapter of Jewish history every single day. If we don’t remember, who will?”

Serving as master of ceremonies, political activist Jeff Wiesenfeld took note of the Neturei Karta counter-protestors across the street who unfurled a Palestinian flag, and warned them that “if Ahmadinejad ever had his way with Israel and Jews, they’d be the first to go.” 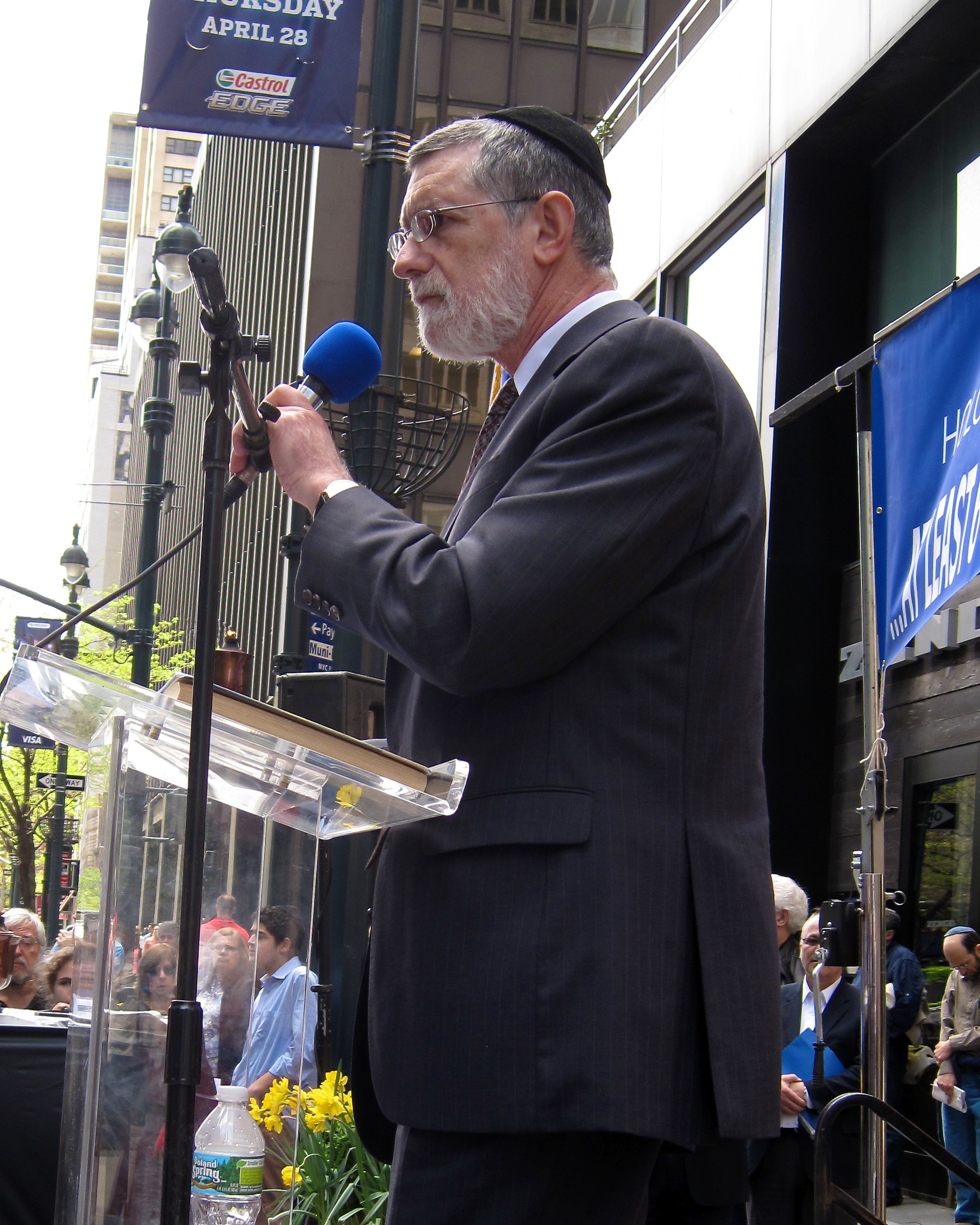 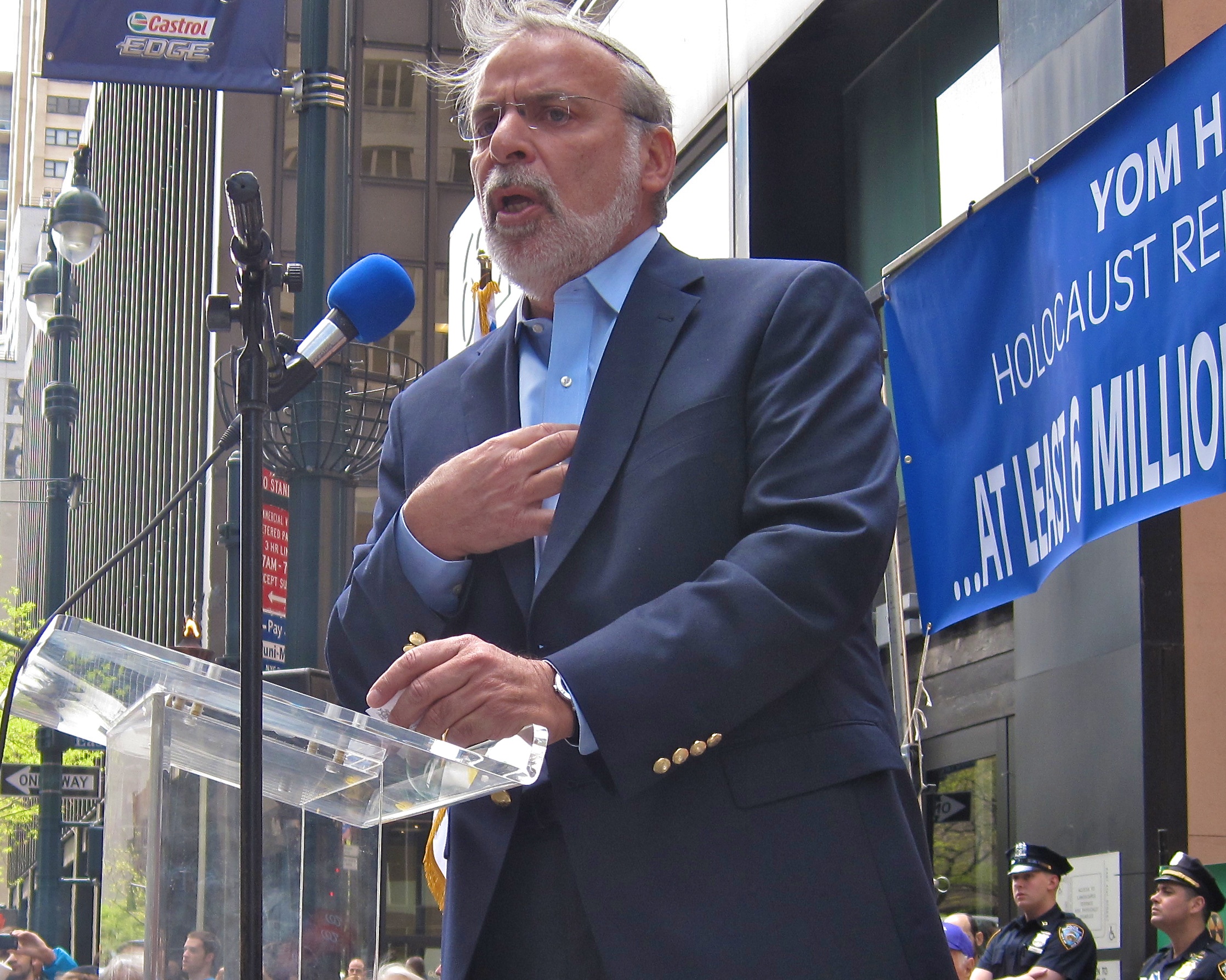 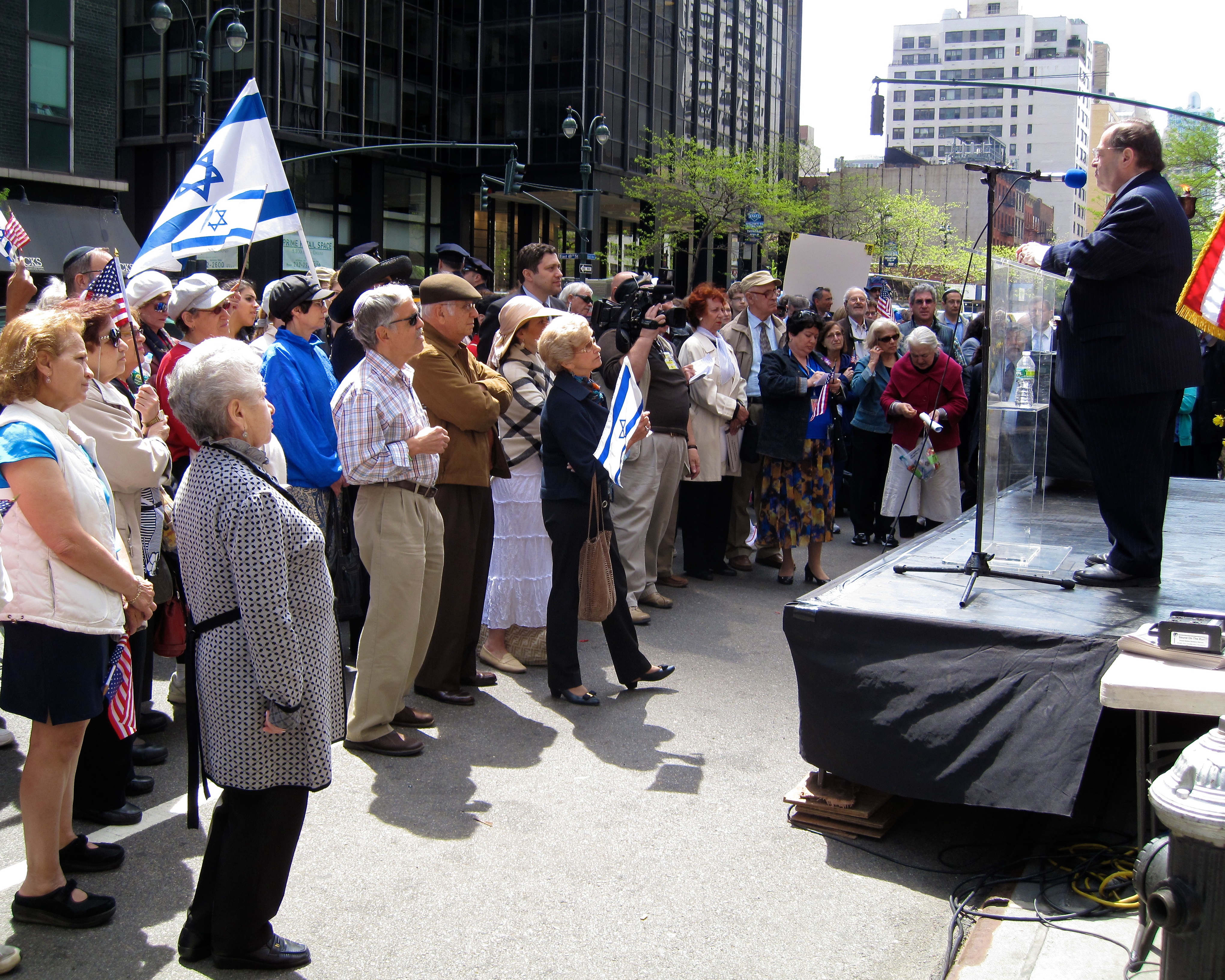