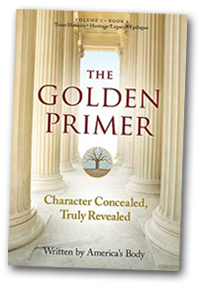 I am going to do something unusual here. I am going to recommend this book because I think it will make a valuable contribution to America’s moral re-generation.

Disclosure: I know the man who wrote it and I have a lot of respect for his vision for America and for each of the people who make up that great nation.

The book is Volume 1, Book 1, “The Golden Primer: Character Concealed, Truly Revealed,“ written by “America’s Body.” From the back cover:

“The Golden Primer is the entertaining doxology of America’s personal and national character at a modern crossroads in a race of ideals, attitudes and self-will… America’s people and culture have been unique to the world over the last 400 years. This is the untold story. Unfortunately, we have allowed for inner-dependence on misguided hope and altered priorities. Our once-reliable institutions are becoming irrelevant and cry out for restoration. Historical revisionism and toleration apathy have slowly devoured our being…

Truth hungers should prepare to be vividly challenged by the genesis of who we are and how we have arrived at this point… Who is America’s Body? We are the flock, we who care about our legacy, now and into eternity; we who believe that if America’s soul suffers the loss of sight, the world will shudder in a loss of light… If we focus upon character, we solve our problems.”

Here at the New Zeal blog, I focus on exposing the leftist forces which seek to collapse America. Whether this is Obama’s former Green Jobs Czar Van Jones, who advocated for radical redistribution of wealth by slashing productivity and increasing employment with green jobs, or the SEIU’s Elisio Medina calling for illegal aliens to be given citizenship so that they can then vote Democrat, or if it’s Stephen Lerner of the SEIU calling for Richard Cloward and Frances Fox Piven‘s “Cloward-Piven” strategy to be implemented, resulting in an eventual breakdown of infrastructure, welfare and even the government itself.

However there is another absolutely fundamental piece to the puzzle of understanding this attack against America. This is the assault upon the character, worldview and faith of its citizens. In this volume (book 1 is sitting next to me on my desk), America’s Body explains how we have got to where we are today – and then proceeds to explain the need and process of restoration.

Pick up a copy. It is a hefty read – the author doesn’t deny it, in fact he boasts that Volume 1′s 800,000 words dwarfs Leo Tolstoy’s War and Peace, and even the Bible’s 770,000 words. But I think you will find it very useful, as will I. I’ll leave you with a poem, written by the author and found within the book.

The Meaning of Character
Character isn’t keeping score.
It’s not about how many people call or text you,
it’s not about who you’ve dated or haven’t dated at all.
It isn’t about who you’ve kissed,
or which guy or girl likes you.
It’s not in the treasures you store here on earth.
It’s not about your property or your hair,
or the color of your skin.
It’s not heathenistic, nor hedonistic.
In fact it’s not about grades, money,
clothes, or friends that accept you or not.
Character isn’t about the vapor of trophies or diplomas,
and it’s not about how accepted or unaccepted you are.
Character isn’t about that.
Character is about learning, beyond yourself.
Character is about your unbridled capacity for love, and to be loved,
who you love and who you wrong.
It’s about how you cherish.
It is inherently grown, but not inherited, nor gained.
It’s about truth, trust, and compassion
away from your own selfish desires.
It’s about eliminating jealousy, destroying ignorance,
and building confidence through light.
It’s about what you say and what you mean.
It’s about realizing the root of your worldview,
establishing your God-given talents,
and bringing glory in blood.
It is touching your absolute soul as you have never done before.
This is truly character and life itself.
America’s Body.

The Golden Primer may be ordered here.

COULD YOU HANDLE THE FEROCIOUS SEAL TRAINING PROGRAM?