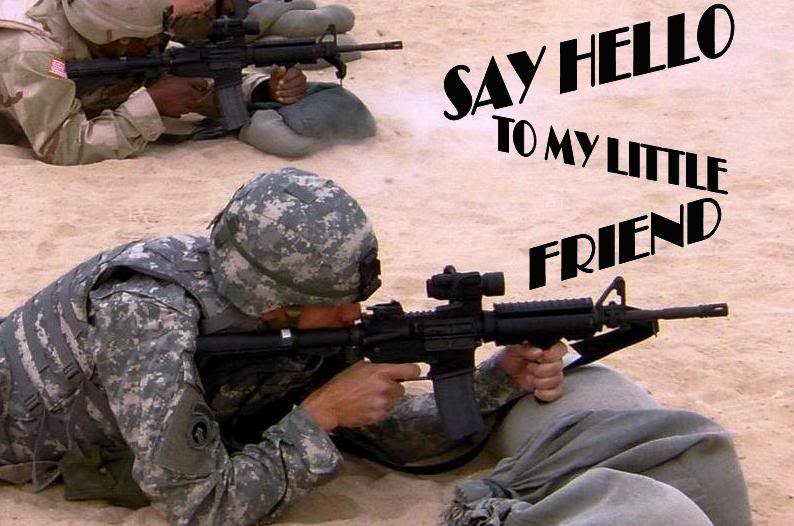 Without wishing to get into the partisan “gotcha” politics of “which politician is the bigger liar,” I do have a view on this.

With a little research, I can probably come up with a dozen more incidents that qualify for the “act of war” title.

For some reason, there is a mindset — and an evidently popular one at that — which prefers to call such attacks against the nation’s resources “criminal acts.” Once you buy into that line of thinking, your ability to effectively deal with the enemy is hosed. Not “criminal,” but enemy.

In an age of asymmetrical warfare, you don’t get nice neat declarations of war enacted by nation states and following the Marquess of Queensberry rules. Or, for that matter, the various (Geneva, Hague) conventions and treaties for the conduct of armed conflict.

When the global “bully” shows up and whacks you upside the head, punches you in the gut, or stomps on your foot, you don’t “fight to be popular.” You fight to win. And “win” is not a nuanced-compromise-so-they-will-all-love-us thing. “Win” is where you have the enemy on his knees begging to be spared and promising anything you ask as long as you let him live. Failing that, “win” is when the enemy has ceased to exist.

Asymmetrical warfare does not require that all the parties are nations. If some bunch of fanatics, numbering in the hundreds of thousands, decides to wage war on you, then you’re an idiot if you don’t quickly adjust your warfare paradigms to include effective counters to “nationless” adversaries. If the current rules and treaties don’t account for the proper defense of your nation, then you quickly get some new treaties in place that allow you to be effective. If you can’t get those new treaties, you must nonetheless be effective. Popularity is not your objective. Respect is all that works here.

Why don’t groups like al Qaeda screw with Russia? Is it because Russia is just too universally loved and popular? No, it’s not. Russia is one absolutely bad-ass adversary and they will relentlessly pursue you and kill you, and they won’t give a shit about the rules. China may be more subtle, but they too will crush you if you mess with them. Protocols? Rules of engagement? Yeah, I’ve got yer f****n ruelz of engagement right here, asswipe. And that is why fanatics don’t play “pin the airliner on the tower” with Russia and China.

Well, since we are only interested in a fast, effective, overwhelming response, calibrated to make anyone else swear off even trying this kind of insanity, we want to use a big hammer on a big target. Well, since the fanatics claim to represent a religion, and show every sign of observing the tenets of that religion (despite the whole mass murder thing), it would seem prudent to sit down with the leaders of said religion and offer them a deal – something like this:

Hi, Ahmed, been a while since we talked. How’s the wife? How’s little Ahmed Jr.? Great. Look, we have a problem. Some guys killed a couple of our favorite buildings and thousands of people along with them. They claim to be with you and your church, and from what we can tell, that seems to be on the level. Now, we know that’s just crazy and that you would never condone somthing like that.

So here’s what we’re willing to do. You dig up these assholes and hand them over to us, alive or dead (we don’t much care), and confirm that you got them all and promise us that this kind of thing will never happen again in any act associated in any way with your church, okay? You have ninety days. After ninety days, we’ll drop a MOAB on Mecca.

What? Unfair? Look, Ahmed, I like you. We’ve always gotten along well. But these assholes attacked us and we just don’t let that go unanswered. They’re doing it in the name of your religion and they are unfortunately credible in that claim.

Yes, I know it’s absurd, but it really comes down to this: you can round them up and hand them over (or kill them and hand them over) and make the world know that this is what happens when you murder people in the name of the church, or you can just allow us to believe that the church somehow endorses that.

Ahmed, baby, you know that you don’t want to piss us off. Japan did that and we smacked them hard. Now they play nice. I would really, really prefer that we didn’t have to go through all the unpleasantness of hitting something you love with a hammer that big. Simplifies things a great deal if you just play nice and help us out on this.

What? You need more time? Well, how much? Okay, we can do six or eight months, but let’s not drag things out. Just to be clear, we don’t care who gets in the way. These bastards have to be brought down and it has to be noisy and public. Okay? With me on this? Glad to hear that. Hey, why don’t you and the wife come over for dinner next week? We’d love to hear your stories about that last cricket match you guys won. Don’t be a stranger.

Wait! No! We can’t be at war with a religion! True, true. That would be crazy, no? But a bunch of fanatics belonging to a religion can attack us and declare war on us and do it in the name of their religion and nobody seems to want that to be true.

Do you imagine for one moment that, if a crack team of Italian Roman Catholic commando priests launched an attack on the Empire State Building — and did it in the name of the church and all the saints — that anybody would cut slack for the Catholic church? Hey, Pope, you need to denounce this now and give us a hand with rounding up these assholes. Religious sensitivities? Don’t make me laugh.

Now, the entire implausibility of the above scenario aside, my point is that, as a nation, if you take crap from other nations or extra-national groups and you don’t execute an immediate and convincing smackdown, you become everyone’s international bitch. Global ridicule.

For this discussion, I have not attempted to address non-military attacks, like Soros-style currency demolition (like the British Pound Sterling and Bank of England). That requires a little more thought. But bombs? Planes-as-missiles into buildings? Crap like that? “SAY HELLO TO MY LITTLE FRIEND!”

And, sadly, I’m afraid that anyone actually captured on the battlefield in an engagement against non-state actors isn’t going to get to squeal “I have rights!” and get any love at all.

When the enemy has abandoned the field, has surrendered, has been obliterated, or whatever the unequivocal representation of victory is, only then do you back off.

Occupy your country? Ahmed, why the hell would we want to do that? Look, the bad guys are dead and their organization is now out of business. We trust you. If more of them show up, we know you’ll deal with them so that we don’t have to. Resources? Sure, we’ll sell you what you need. Heck, we’ll even help train your guys. No, that’s not a freebie, you’ll be paying for those services.

In the end, you establish that you are the baddest, meanest, implacable MoFo to have as an enemy, but having us as a friend is smart business.

You establish that you don’t take shit from anyone — even assholes pretending to be religious.

And that is how you secure the nation. Well, that and effective border security, but that’s a topic for another day.

Pursue the chief bad guy to the ends of the earth? Cap his ass when we find him? Hell, yes. Make excuses? Observe the “religious protocols” of the church he pretended to represent? Screw that. Light him on fire and drag his ass through the streets behind a Humvee? Well, that does seem to be a local custom for dealing with slain enemies . . . well, okay, when in Rome . . .

Naturally, there will be some terribly civilized folks who see all this as utterly barbaric and, actually, I agree. It is barbaric. The problem is, you see, when you’re dealing with barbarians, that’s pretty much all that will register with them. Just for clarity: anyone who would, unprovoked, fly a plane full of jet fuel and passengers into a building, killing thousands of people not involved in any “struggle” with the killers, is a barbarian.

You wanna be civilized about the way you conduct war? You will wind up where Greece and Rome did: conquered by the next big civilization.

You don’t want that outcome? Then behave like you’re in a goddamn war and get the job done.

One thought on “Regarding The Delicate Sensibilities of War”