Now that the hoopla over the successful United States “hit” on arch terrorist Osama bin Laden has begun to fade into the annals of history, the stark realization that the US and the free world are still bereft of a concrete plan of action to stem the tide of al-Qaeda terrorism is beginning to set in. Having spent close to 10 years assiduously tracking down the elusive 9/11 mastermind, we hasten to remind the CIA, along with the various and sundry intelligence networks, that the task of eradicating Islamic radicals bent on global domination demands replication of the kind of “muscle” that bagged bin Laden.

Taking a cursory glance at the modern state of Israel’s 63-year history and the bold modalities employed to confront the existential perils presented by a veritable panoply of terrorist organizations, it would appear that the Jewish state can teach the world a lesson or two in the area of “focused foiling”. Having enshrined targeted assassinations as the pillar of their counter-terrorism doctrine, Israel has succeeded in creating a profound cumulative effect on the vast array of terror organizations in its midst. Leaving Hamas, Hezbollah, Islamic Jihad, and the Al Aqsa Martyrs Brigade in a state of obfuscation and disarray through the routine elimination of their leaders; such actions clearly serve as a viable deterrent for those next in line for succession into their predecessors’ shoes.

For a brief historical retrospective, let us recall that the long arm of the Mossad often launched surprise attacks terrorists in the most remote locations. In April 1973, Ehud Barak (who was dressed as a woman), led Israeli commandos as they landed in Beirut and “took out” senior members of the Fatah movement including Yusuf Najjar who was Yassir Arafat’s deputy and Fatah spokesman Kamal Nasir. Israel also had a direct hand in the 1979 explosion in Beirut that killed Hassan Ali Salamah, founder of Fatah’s elite Force 17. In April of 1988, yet another brash operation was undertaken when an Israeli commando force under the leadership of former IDF chief of staff Moshe Ya’alon landed in Tunis and killed Khalil al-Wazir, known by his nom de guerre Abu Jihad. This reprehensible miscreant was the head of the PLO’s military branch and the second in seniority in the organization.

Subsequent to a bloody barrage of suicide attacks which claimed the lives of dozens of Israelis, agents from the Mossad shot and killed Fathi Shiqaqi, the head of the Palestinian Islamic Jihad in October of 1995 in Malta. Yahya Abdel-Tif Ayyash, the notorious Hamas operative, better known to many by his sobriquet “The Engineer” was the next in line for Israeli retribution when in 1996 he made his last call in Beit Lahya, Gaza using a booby trapped cellular phone that exploded in his hands. For those who don’t remember, he was responsible for masterminding suicide attacks in which 50 Israelis died and 340 were wounded.

Other Hamas leaders targeted for their role in the Al-Aqsa intifada of 2000 included Mahmoud Adani, killed in February of 2001, Jamil Jadallah, killed in November 2001, Salah Shahade, killed in July 2002, Sheikh Ahmed Yassin, killed in March 2004, Abdel Aziz al-Rantissi, killed in April 2004 and Adnan al-Ghoul, killed in October 2004. And the list goes on.

In terms of vanquishing terrorism, targeted assassinations can be classified as a measured response in that they exclusively focus on actual perpetrators of militant attacks, while dramatically reducing collateral damage in terms of civilian and non-combatant casualties. In a 2010 article entitled “Targeted Killings Work” that appeared in Infinity Journal, the argument was made that targeted assassinations are a strategy that entails “limited force in support of policy” and that it has proven most successful.

The context of the article specifically related to proclamations from Hamas that called for cease fires and “periods of calm” in 2004 after the hub of their leadership had been targeted by Israeli forces. The article states that Israeli targeted killings throughout “the 2000-2005 armed rebellion represented a successful strategy” because “the tactics never undermined Israeli policy enough to alter Israel’s overall political objectives” and because Hamas’ will to perpetuate armed violence was broken, albeit temporarily.

And for those who are of the opinion that targeted killings are extrajudicial; thus standing in direct contravention to the values and norms of a democratic society, let it be known that on December 14, 2006, the Israeli Supreme Court ruled that targeted assassination is indeed a legitimate form of self-defense against terrorists.

Perhaps the United States should follow Israel’s lead in terms of beefing up their intelligence, getting down to the nitty-gritty and taking the gloves off. Al-Qaeda leaders and others in their coterie have promised to exact revenge against America, its president and its people. One would have to be exceptionally naive at best and abysmally ignorant at worst to take such saber rattling lightly. Let’s not forget Ayman al-Zawahiri, the Egyptian surgeon who joined a jihadi cell when he was just 15. His militant group Al Jihad is believed to have played a pivotal role in the 1998 bombings of US embassies in Tanzania and according to reports, Zawahiri is viewed as al-Qaeda’s most significant ideological mouthpiece. Some terrorism experts believe that he was more instrumental in the 9/11 attacks than even bin Laden.

The wanted list, however, doesn’t stop here. As a top ranking member of Al Qaeda, Saif Al-Adel was indicted by the United States for his role in the same 1998 bombings in Tanzania and there is speculation that he may now be the military commander of the terrorist group. Also an Egyptian, al-Qaeda member Abdullah Ahmed Abdullah has orchestrated the establishment of terrorist training facilities in Somalia and assisted Saif al-Adel in providing military intelligence and training to al-Qaeda members in the Sudan.

Terrorists come in variant forms, shapes and sizes and are not necessarily limited to minimalist cave dwellers. They can be also be found as heads of state in that bastion of instability known as the Middle East and their names can also be Mahmoud Ahmadinejad, Muammar Gaddafi and Bashar al-Assad. The time is long overdue to reconsider all options in the ongoing war on terror; to learn lessons from the intrepid Israelis and to prepare to gird our loins for the battles that lie ahead. 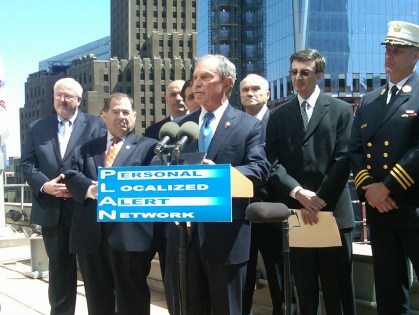 That’s how they intend to sell this thing? A cute name and a slogan? Don’t we already have a cute name for this? SPAM?

Media trying to sound competent. The “special” chips will be part of any current production smart phone.

Given the very recent “presidential” information disseminated by the Executive Branch in the wake of the Bin Laden episode, does anyone else find this just falling-down-funny?

For now, the alerts are capable on certain high-end cell phones but starting next year, all cell phones will be required to have the chip that receives alerts.

Yeah. That was predictable. Well, at least that will drive the cost of cheap cell phones up. I was really troubled by the preponderance of cheap junk phones on the market. They’re doing their best to help solve that problem.

So who was at the helm when this happened?

This new emergency alert system is part of the Warning Alert and Response Network Act that was approved by Congress in 2006.

Was that before or after the election cycle of 2006?

So, let me think a minute, using what little I know about cell phones…

To make this work, you would need either a list of the cell phone numbers in the target area (a subscribed list) or you would have to have a central monitoring point that is “always aware” of what phones are in the area. This isn’t that hard, considering that the cell tower hand-off protocol requires that the tower system be able to identify phones moving through their zone in order to make a seamless hand-off to the next tower, so the data is already in the tower farm. The phone switching network has to keep track of this as well, so that phone calls can be routed. In truth, the phone system always knows (in general) where your phone is, otherwise you couldn’t receive calls or text messages. So the “central monitoring point” already exists (phone switching), all you would need for an emergency SPAM broadcast is a way to inject messages into the system to “all currently active phones” in a region.

Now, that’s not a two-way Big Brother thing, that’s a one-way “announcing” conduit. However, in the spirit of Orson Welles, it occurs to me that there are ways to abuse a one-way conduit. Imagine what you could do with a little ear piece that allowed you to “talk” directly to each cow in a herd. As the “cow whisperer” you could direct them, soothe them or stampede them. And so it is with something like this. Only now you’re the “mob whisperer” with the ability to inform, alert, soothe, or stampede the population of a region. Not that anyone would ever broadcast misinformation/disinformation or incite panic using a system like this.

Now, if I allow my imagination to run a little with this, I could contrive some way for this to permit spying on citizens, but that would be gilding the lily: the systems for spying on folks using their phones are already in place. All they have to do is “wonder” loudly enough if you’re involved in terrorism, and the existing laws and phone tracking systems are sufficient to that purpose.

I’m more concerned with the “mob whisperer” aspect. That, and this other little thing: security.

In the hands of a benign agency, a tool that reaches virtually everyone (better coverage than either radio or TV) can do some good. However, given that we’ve had ne’er-do-wells hack into places like the DoD and Pentagon, I worry that the system could be hijacked by malicious pranksters.

I will admit, though, that there is a significant “creep” factor in this.