The life long pro-communist Rev. Jesse Jackson, has issued a call for restoration of relations between Cuba and the United States. 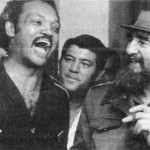 Jesse Jackson and Fidel Castro share a joke and a smoke. Havana 1984.

The Rev. Jesse Jackson on Wednesday termed the U.S. economic blockade of Cuba outdated and obsolete, and said he hoped for the restoration of relations between the two neighboring countries.

In an interview with Prensa Latina in the capital of Qatar, where the outstanding civil rights activist was attending the 11th Doha Forum, Jackson stated that “Cuba is a sovereign state, a full member of the UN General Assembly – which has condemned Washington’s policy – and a full member of the international community… We are neighbors and need each other, we can develop bonds that could bring mutual benefit,” and later remarked, “I hope that one day, the wall that separates the United States and Cuba will fall.”

For a rundown of Jackson’s pro-socialist/communist record, go here.

You may not agree with everything he says, but he deserves full credit for courage and coherence.

Removing the Boot from the Throat of American Businesses

Content warning. Today seems to be the day for strong language. Also, a whacko warning – just sayin’. Propaganda for weak minds aimed at the masses and the young.