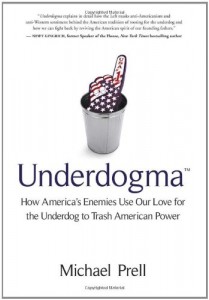 Rarely do I come across an author that I feel thinks along the same lines as I do. Michael Prell is one of those rare individuals. A kindred conservative pundit and a very wise author. This is a man that I could call friend. A man who would be welcome in my home and at our dinner table. It’s as if he knew what I had written and thought about. As if he knew my research and felt the same way that I have for years. I hear the echoes of what I have spoken about over the years and it gives me great hope for the future.

I’m always reading books. Sometimes 2 and 3 at a time. For a book to capture my sole attention is an event bordering on magical. When I started reading Underdogma, magic ensued. Our philosophies clicked and I was hooked. Jenny Beth Martion, co-founder of Tea Party Patriots, calls Underdogma the first great Tea Party book. And I would enthusiastically agree. The book manages to take the politically correct insanity that is infecting our world today and explain it in a way that clarifies and gives individuals hope. Hope that we can fight the liberal Progressivism so entrenched in American culture that sometimes it feels like it would be impossible to remove every hooked barb that has lanced itself into America’s psyche. This book is the cure for the disease of Marxist tyranny and an antidote to Progressive collectivism. Prell writes:

“Most of human history has unfolded at either end of the sword of tyranny. The brief flash of liberty that gave rise to the United States can disappear, and history’s long, near-uniterrupted line of tyranny can resume. Underdogma is putting us on the road back to that long line of tyranny.”

I have always believed strongly in American exceptionalism. So does Prell. However, more and more in America do not. They are anti-American, anti-capitalism, anti-conservative and anti-Israel. The perfect evil ingredient mix for the rise of a new and powerful fascist state. Think it can’t happen here? Neither did the Germans just before the rise of Adolph Hitler.

Michael Prell defines ‘Underdogma’ as a noun that is defined as “the reflexive belief that those who have less power (Underdogs) are good, and that those who have more power (Overdogs) are bad. This belief will even go against the survival instinct as you see here in the West where gays support the Palestinians who would gladly bury them up to their necks and stone them to death or bestow an even more gruesome fate on them if given the chance. Underdogma explains the sheer hatred that emanates from the Progressives for all that the Tea Party and conservatives stand for. It’s as though they find virtue in evil because it does not yet triumph over good. Any idea, stance or thought is championed for if it is not considered the most powerful out there. Thus, you have Progressives heartily defending the 9-11 terrorists and their atrocious, murderous deeds. You have their love affair with radical Islam and the dark hell that it would subject the world to. It also explains their hatred of Israel who is perceived to be an Overdog because of their nuclear weapons, strong military and alliance with the sole super power left on earth, the United States. And lastly, but certainly not the least of these beliefs, is the Progressive love of Marxism and Communism. The idea that the working class should rule and share equally in all things monetary regardless of effort or whether they deserve it – they would rather see a collective 3rd world of poverty and misery, than see some have more than others.

However, I will add a caveat here. I personally believe in Underdogma. But I also believe that evil plays its part in all this. I believe the elite play the game of Underdogma as long as they are not included in it. That they get to live “outside” the rules of this class and social warfare. Sharing and equality for thee, but not for me – hands off my fortune and toys. They feel they are above all that – they are the elitists.

Prell lays out case after logical case concerning Underdogma; a history rich in facts. But, he doesn’t stop there. He lays out how to overcome it, to defeat Underdogma through American exceptionalism. He counsels us to return to the original intent of the Founding Fathers and our constitutional roots. And that is the answer… It always has been. Restore our government checks and balances and give power to all, not a few. The Tea Party is all about this. Rekindle the American spirit. Let capitalism and ingenuity run free again. Smaller government, massively less regulation, gut the tax system and reduce it, less spending (which should be heavily controlled and balanced) and an adherence to founding principles. This is the cure for what ails America. Thank Michael Prell for giving all of us a light in the dark and a way back towards the city on the hill that President Reagan loved so much.

I can’t recommend this book highly enough. If you have felt lost and powerless… If you just can’t wrap your head around why Progressives say, feel and do what they do… Buy this book. Purchase copies and give it to your friends and family. Help America regain her balance and defeat the Underdogmatists. We owe it to future generations. We owe it to ourselves…