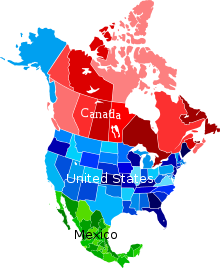 Gulag Bound will be logging a number of entries about the facts (and any potential opinions) of plans for “North American Integration,” also called “North American Union.”

Over the last few years, researchers and whistleblowers of attempts to integrate the nations of Canada, Mexico and the United States of America have been overwhelmingly ridiculed. Some of that ridicule has been all but invited, by extravagant claims made without documentation or citation and much of it continues to be suspect.

But now we do have documentation and citations to make. Gulag Bound will number our entries. Our first designation is NAU-01.

The failure of the news media (including conservative media, blogs not exempted) to report on the following leaked cable speaks loudly in its silence. However, the John Birch Society, much more often right than wrong, as the unfolding of recent history demonstrates, have not failed.

An article, “WikiLeaks Exposes North American Integration Plot,” in their New American reported the April 28th news on May 2nd.

This unrefuted memo, from George W. Bush appointed U.S. Ambassador to Canada, Paul Cellucci, demonstrates an agenda far beyond favored trading status between the three nations. Rather, it is a short essay on incrementalism vs. a “big deal” approach aimed at thorough political “integration” (to the extent of making “union” synonymous). Since it was drafted by our ambassador to Canada, it tends to emphasize the U.S.-Canadian relationship, but even where it does, it refers to the overall North American goal.

Before further comments are made, the memo follows, as copied from wikileaks.ch, with minor formatting adjustments. The Bush Administration has “spoken for itself” (and we have evidence of nothing but a worse course taken by the Obama Administration). Gulag Bound’s sparing emphasis in certain places is made in bold.

This record is a partial extract of the original cable. The full text of the
original cable is not available.

STATE FOR WHA/CAN – BREESE AND HOLST

¶1. THIS MESSAGE IS SENSITIVE BUT UNCLASSIFIED. NOT FOR
DISTRIBUTION OUTSIDE USG CHANNELS.

¶2. (SBU) An incremental and pragmatic package of tasks
for a new North American Initiative (NAI) will likely gain
the most support among Canadian policymakers. Our research
leads us to conclude that such a package should tackle both
“security” and “prosperity” goals. This fits the
recommendations of Canadian economists who have assessed the
options for continental integration. While in principle
many of them support more ambitious integration goals, like
a customs union/single market and/or single currency, most
believe the incremental approach is most appropriate at this
time, and all agree that it helps pave the way to these
goals if and when North Americans choose to pursue them.

¶3. (SBU) The economic payoff of the prospective North
American initiative – in terms of higher incomes and greater
competitiveness – is available, but its size and timing are
unpredictable, so it should not be oversold. Still, a
respectable economic case has been made for such an
initiative, and this message spells it out. We believe
that, given growing Canadian concern about “border risk” and
its effects on investment, a focus on the “security” side
could also produce the most substantial economic/trade
benefits.

¶4. (SBU) Canadian economists in business, academia and
government have given extensive thought to the possible
options for further North American integration. Nearly all
of this work assumes that each of the three countries is
pursuing standard economic policy goals – growth,
productivity and competitiveness (rather than more specific
concerns raised by Mexican analysts such as migration
management, regional development, or environmental
protection). Since 9/11, Canadian economists working in
this area have generally endorsed a comprehensive initiative
with the United States on security, trade, and immigration.
Following is our summary of the professional consensus:

PROCESS: At this time, an “incremental” approach to
integration is probably better than a “big deal”
approach. However, governments should focus on
choosing their objectives, and not on choosing a
process.

BORDER VS. PERIMETER: Even with zero tariffs, our land
borders have strong commercial effects. Some of these
effects are positive (such as law enforcement and data
gathering), so our governments may always want to keep
some kind of land border in place. Canada and the
United States already share a security perimeter to
some degree; it is just a question of how strong we
want to make it.

BORDER RISK: The risk that business will be obstructed
at the border by discretionary U.S. actions, such as
measures to defend against terrorism or infectious
disease, in addition to growing congestion, have become
major risks to the economy, inhibiting investment in
Canada. For small businesses, the complexities of
navigating the border are apparently even more
intimidating than the actual costs. Reducing this risk
is Canada’s top motive for pursuing further
integration.

LABOR MARKETS: Many Canadian economists point to labor
markets – both within and among countries – as the
factor market where more liberalization would deliver
the greatest economic benefits for all three countries.
They advocate freeing up professional licensing laws,
and developing a quick, simple, low-cost work permit
system, at least for U.S. and Canadian citizens.

REGULATION: Canadian economists agree that Canadian
regulations (if not their standards, then their
complexity) are needlessly restricting foreign
investment and impeding food, communications and other
industries. (Inter-provincial differences are
important here, since Canada’s federal government does
not have the benefit of a U.S.-style “interstate
commerce” clause). While much of the problem is
domestic in nature, an international initiative could
help to catalyze change.

CUSTOMS UNION: A common external tariff, or a customs
union which eliminated NAFTA’s rules of origin (ROO),
is economically desirable. NAFTA’s ROO are so
restrictive that importers often prefer to pay the
tariff rather than try to prove North American origin.
However, economists differ on the size of the benefits
available and on whether these would justify the effort
of negotiation. One study estimated that a full
customs union which eliminated ROO would only raise
national income by about one percent.

CURRENCY UNION: Canadian economists are split on
whether a return to a fixed exchange rate, or adopting
the U.S. dollar, would benefit Canada in current
circumstances. (Canada last tied its dollar to the
U.S. dollar from 1962 to 1970). The central bank
governor has taken the position that “monetary union is
an issue that should be considered once we have made
more progress towards establishing a single market.”

¶5. (SBU) Past integration (not just NAFTA but also many
bilateral and unilateral steps) has increased trade,
economic growth, and productivity. Studies suggest
that border efficiency and transportation improvements
(such as the lower cost and increased use of air
freight) have been a huge part of this picture.
Indeed, they may have been more important to our
growing prosperity over the past decade than NAFTA’s
tariff reductions. Freight and passenger aviation are
critically important to our continent’s
competitiveness, and businesses are very sensitive to
the timing, security, and reliability of deliveries –
hence the “border risk” which so concerns Canadian
policymakers.

¶6. (SBU) A stronger continental “security perimeter”
can strengthen economic performance, mainly by
improving efficiency at land borders and airports. It
could also facilitate future steps toward “>trilateral
economic integration, such as a common external tariff
or a customs union, if and when our three countries
chose to pursue them. Paradoxically, the security and
law enforcement aspects of the envisioned initiative
could hold as much – or more – potential for broad
economic benefits than the economic dimension.

WHERE’S THE UPSIDE?
——————-
¶7. (SBU) Some international economic initiatives (such
as FTAs) produce across-the-board measures that
generate broad benefits for a country’s industries and
consumers on a known time-line. This was true of NAFTA
but it is less likely to be true of the economic
aspects of the NAI. Non-tariff barriers such as
standards and regulations generally must be tackled one-
by-one. This is a piecemeal process and the ratio of
payoff to effort is likely to be lower than with across-
the-board measures. Governments naturally focus on
resolving the problems which their firms or citizens
bring to their attention. While this approach has
merits, it tends to deliver the payoffs toward
particular interests. If there are hidden costs, there
might be little impact on national performance. As we
move toward a list of barriers to tackle, it will
remain important to balance those interests. For
example, some Canadian economists have suggested that
NAFTA fell short of expectations with respect to
increasing consumer choice in Canada; that may be a
theme we should stress as efforts to promote further
integration take shape.

¶8. (SBU) In contrast, cooperative measures on the
“security” side, a critical focus of current bilateral
efforts, can deliver substantial, early, and
widespread economic benefits. Security and law
enforcement within North America have evolved rapidly
since 9/11, leading to many less-than-perfect processes
for handling legitimate international traffic.
Collaboration to improve these processes could yield
efficiency improvements which would automatically be
spread widely across the economy, leading to general
gains in trade, productivity, and incomes.

¶9. (SBU) There is little basis on which to estimate the
size of the “upside” gains from an integration
initiative concentrating on non-tariff barriers of the
kind contained in NAI. For this reason, we cannot make
claims about how large the benefits might be on a
national or continental scale. When advocating NAI, it
would be better to highlight specific gains to
individual firms, industries or travelers, and
especially consumers.

There is more to come soon.

Apparently to these liberal activists, America was quite ugly during its nearly 200 years of history prior to 1965.

PS — Why am I not surprised to learn the founder of this group has direct ties to George Soros and Obama administration officials? I tell ya — it’s SUCH a small world!

Sen. Harry Reid (D-NV) has scheduled a vote on Goodwin Liu’s nomination tomorrow. Despite other clips of Mr. Liu seeming to advocate for working at the community level to right the wrongs of slavery, this clip displays a very specific idea that something must be given up “to make things right” including “giv(ing) up money” or else “the reconciliation can’t fully occur.”

The revelation of this new video could be a devastating blow to Mr. Liu’s nomination.

Geithner: Another Meltdown is ‘Certain’ — Raising Taxes on the Wealthy Will Come (Hat Tip: Nancy Jacques)