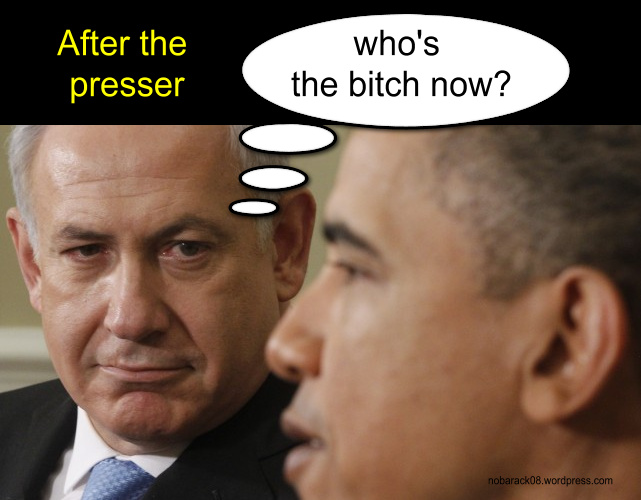 Rush on Bibi’s remarks: This is orgasmic! (Hat Tip: Brian B.)

OBAMA: ‘Limited’ US Role in Libyan War Means No Need For Congressional Authorization…

I DON’T NEED YOUR PERMISSION

Read more from The Blaze…

Contemporary coverage of the Six Day War — clear-sighted and moral 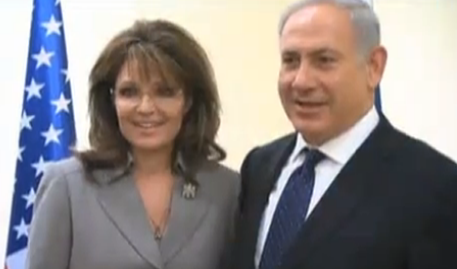 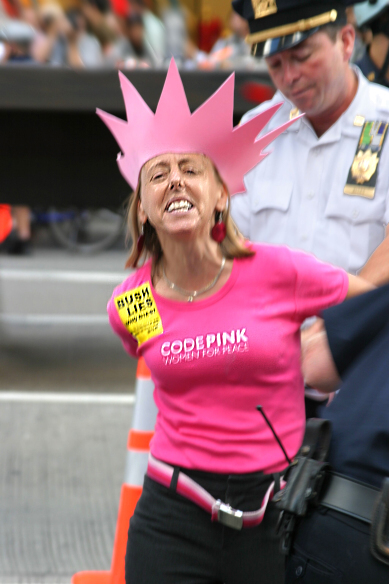 Unofficial Obama adviser Medea Benjamin, founder of Code Pink, organized a small demonstration in Washington, D.C. this week to demand that the U.S. terminate military aid to Israel. “Not one nickel. Not one dime. We won’t pay for Israel’s crimes,” Benjamin led the demonstration in the anti-Israel chants. One protester from the Washington, D.C. Green Party said the U.S. and Israel were terrorist governments.

Benjamin, a member of the International Solidarity Movement which is allied with enemies of the U.S. and Israel, is known for her pink outfits. She announced in 2009 that she was going to deliver a letter to Obama from the deputy foreign minister of Hamas. “In the letter,” reported Benjamin, “Hamas urged Obama to visit ‘our ground Zero’ in Gaza and bring about a ‘paradigm shift’ in the Israel-Palestine conflict based on enlightened world opinion and international law.

This appears to be what Obama did in his Thursday speech urging Israel to return to its vulnerable 1967 borders with the Arab states.

The occasion of the protest was the launching of an advertising campaign on the Washington, D.C. subway system calling for an end to aid for Israel, a development that would lead to the demise of the Jewish state. The ads are being posted inside Washington Metro Area Transit Authority (WMATA) Metrorail trains for the next 4 weeks. The demonstration took place on May 16, just a few blocks from the U.S. Capitol, and attracted several television cameras.

Organizers said the protest was not designed to support the terrorist group Hamas, with Benjamin saying that she has traveled to the Middle East merely to “meet” with leaders of the organization. “Does meeting with somebody mean that you support them?” she said. However, numerous participants in the demonstration refused, under questioning, to directly condemn Hamas as a terrorist organization.

It may sound incredible that a far-left agitator like Benjamin would have clout with the President of the United States, but she is very close to such notables as Jodie Evans, an Obama fundraiser, and Bernardine Dohrn, the former Weather Underground terrorist leader and associate of the President when he was a Chicago politician on the rise. This video shows Benjamin and Dohrn in deep and friendly conversation before Dohrn exploded over allegations from this columnist that she was involved in the bombing murder of a policeman.

Turning their attention to Latin America, Jodie Evans and Medea Benjamin have been photographed whooping it up with Venezuela’s Marxist ruler Hugo Chavez, a collaborator with the Iranian and Cuban regimes against U.S. interests around the world.

Benjamin is also a co-founder of Global Exchange, a group that sponsors trips to Venezuela and Cuba and which took out an ad in a memorial service booklet in honor of the Weather Underground and Black Liberation Army (BLA) member Marilyn Buck, a convicted terrorist who died last year. “Marilyn we appreciate your love and your sacrifices” it said. The ad featured a quote from Fidel Castro sidekick Che Guevara about a “true revolutionary” being guided by “feelings of love.”

Global Exchange is also a member of the “Hands Off Assata” campaign, which is designed to discourage the FBI from seeking the return of convicted cop-killer Assata Shakur, a BLA member who fled to Cuba after escaping from prison with the help of the Weather Underground.

Benjamin has used her access to Obama officials to argue against FBI investigations of members of the International Solidarity Movement, who are being called before a grand jury in Chicago because of their work with terrorist groups such as Hamas, the Popular Front for the Liberation of Palestine, and the Revolutionary Armed Forces of Colombia (FARC). On one occasion, she pressed Obama Attorney General Eric Holder to intervene with the FBI to stop the probes.

“We have people we know that have been appointed or are advisers,” Benjamin said about the Obama Administration. “I mean, we’re excited that some people with some progressive views are going to be in this administration.”

In addition to favoring a policy of abandoning Israel, Code Pink has demanded that Obama withdraw U.S. military forces from Afghanistan, leaving that country to the mercy of the Taliban and al-Qaeda. A video shows Evans and Obama at a fundraiser engaging in friendly conversation, with Obama putting his arm around her.

Protests have been raging in Spain since Sunday, May 15. The one we’ve been seeing pictures of is in Madrid, in the famous Puerta del Sol. But there were protests in 60 different locations on Sunday, and they’re still raging in different parts of the country.