Read more at the Right Scoop…

Read more at the Right Scoop…

The month of May in the State of Texas lends itself to an interesting, not particularly appreciated, but interesting form of law enforcement. My guess is this is a national event leading up to Memorial Day weekend where we are bombarded with Department of Public Safety reminders, “Click it or Ticket;” a not so subtle reminder that everyone, front seat or back, must wear a seat belt or get pulled over and ticketed. That’s about the same as “Buckle up or else” and don’t think for a moment they don’t mean it; revenue is revenue.

I won’t get into the Nanny State argument, that it’s none of their business, valid as such a discussion might be; the law clearly states everyone has to wear a seat belt so we have no choice in the matter. Most drivers wear seat belts voluntarily and have air bag protection; all the same, there’s something repugnant about being pulled over simply for not wearing a seat belt. In the near future, we might get ticketed for not putting the toilet seat down; the public’s safety has no reasonable limits.

This morning I got pulled over by a State Trooper on my way to a locksmith call. I was aware of his presence on the road for a mile or so and knew I hadn’t been speeding or had done anything which might endanger the public. That having been said, I pulled over to the side of the road and unfastened my seat belt so I could reach my wallet.

The Trooper exited his vehicle while I got out my driver’s license, proof of insurance and retired HPD identification card, which also serves as my concealed handgun permit. Instead of approaching the driver side door he came up on the passenger side; presumably to be away from traffic; glad I have power windows or it would have been awkward.

“Good morning, Sir,” handing him the aforementioned identification and noticing his senior partner was also out of the vehicle. The young officer explained the reason for the traffic stop was because the “center brake light” was not working and the license plate holder had obscured the license plate. It took a moment for the explanation to sink in, thinking to myself, “Did he say center brake light?”

“I wasn’t aware of that, thank you for pointing that out.” In actuality the defective center brake light, which was the primary reason for being pulled over wasn’t a brake light at all. The camper shell which is attached to the truck comes with a center “running light” and is not required to function as a brake light. As far as the license plate frame obscuring a clear view of the plate; a loud sneeze which sounds remarkably like “Full Sheet” would explain this lame accusation. 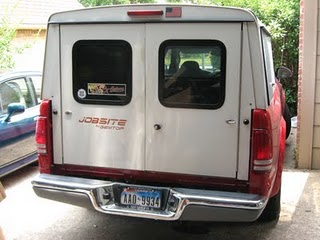 “You’ll be issued a warning ticket only for these violations.” The Trooper made sure to look at the front license plate, inspection sticker and plate renewal sticker. You’ll be pleased to hear I conducted myself properly and never once let on how irritating this type of traffic stop comes across to the average driver, much less a retired police officer.

While this was going on, I watched his senior partner casually leaning against his patrol car jotting notes in a small pocket sized book; never bothering to be a second set of eyes for his junior partner during the traffic stop. Giving them the benefit of the doubt, that this was a training effort intended to give the junior Trooper a chance to interact with the public, the idea of the senior partner being distracted didn’t set well either. The whole purpose for having a partner is to lend added safety during traffic stops and other times when dealing with the public, not take notes which could be done later when time permits.

Upon relating this morning’s traffic stop to my dear grey haired mother, this sweet law abiding mother of a retired police officer let slip a common slang, one which most of us would agree fits this type of law enforcement approach. Forgive my spelling; but there’s no need for the letter “R” in Chicken Shirt. Law enforcement efforts like these ruffle the public’s feathers and stir our minds into wondering when we became a police state.