By: Bookworm
From: Bookworm Room 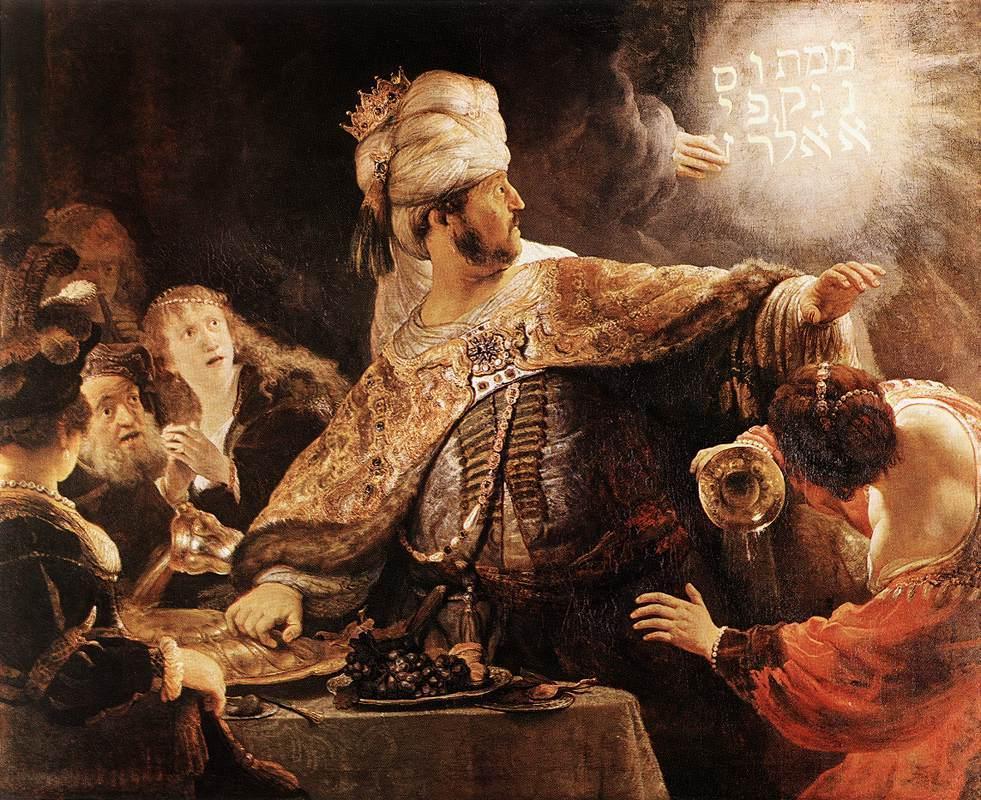 I’ve often heard people use the expression “he saw the handwriting on the wall.” I wonder, though, how many know that it originates in the Book of Daniel, which is a part of the Old Testament. I’m reasonably sure that most of my readers are familiar with the story of Daniel, but for those who aren’t, here is the briefest summary possible: Daniel lived in Babylon during the Jewish exile and became a high court official to King Nebuchadnezzar and, after him, to his son Belshazzar. He was renowned for his ability to interpret dreams and other signs.

The story of “the handwriting on the wall” has it that Belshazzar and his court engaged in blasphemy, defiling sacred Jewish temple vessels. Suddenly a hand mysteriously appeared before the crowd and wrote upon the palace walls. Belshazzar summoned Daniel and asked him to read and interpret the writing:

25 “This is the inscription that was written:

26 “Here is what these words mean:

Mene: God has numbered the days of your reign and brought it to an end.

27 Tekel: You have been weighed on the scales and found wanting.

28 Peres [aka Upharsin]: Your kingdom is divided and given to the Medes and Persians.”

I keep thinking of that phrase “you have been weighed and found wanting,” and I think of it in a very specific context: liberal institutions, such as the media, Hollywood and universities. The phrase first floated up in my brain when I had the back–and–forth with Jesse Kornbluth regarding his (to my mind) undeservedly laudatory profile of Andrew Sullivan in Harvard Magazine. In support of his contention that his research, writing and analysis were solid, and that Andrew Sullivan isn’t a bitter, flaky antisemite, Kornbluth offered his and Sullivan’s academic and mainstream media credentials as proof positive that Sullivan was deserving of the praise he received and that Kornbluth had done his due diligence as a reporter and/or had reasonably interpreted the data he did discover.

What seemed to elude Kornbluth was that those credentials didn’t cause me to strike my forehead and say “Wow! I guess I don’t need to worry about the factual and logical gaps in the article. These are both Ivy League men who have made their presence known in the mainstream media. They must be correct.” Instead, I kept my eye on Kornbluth’s text and the known facts about Andrew Sullivan, and stuck to my initial conclusion that Kornbluth had been way too generous in his praise.

For conservatives, the liberal establishment — an establishment that nurtured many of us, myself included, during our formative years — has been weighed and found wanting. We conservatives, for example, no longer assume that, if the news is from the New York Times, or if the reporter works at the New York Times, that means that both the news and the reporter have the imprimatur of honesty and reliability. We know that the New York Times is now, and has been since at least the 1930s, a reliable arm of the lefter side of the political spectrum — and a fundamentally dishonest one, to boot, since it has always vigorously denied its bias.

In the old days, the Times‘ bias was hidden behind stodgy writing aimed directly at the middle classes. The bias existed nevertheless, whether the paper was lying about Soviet Russia in the 1930s, swooning about Communist China, arguing against Jewish rescue in the late 1930s and early 1940s, or fomenting anti-War sentiment during the Vietnam era. Nowadays, of course, under Pinch’s (what’s the opposite of august?) leadership, although still proclaiming itself an “independent” news organ, the Times doesn’t even make the pretense of independent reporting. Its articles, whether about politics, food or movies, are distinguishable only in tone (slightly more hip and less earnest) from The Nation.

Because of the Times’ bias, a bias it refuses to acknowledge, people interested in factual objectivity (an objectivity that would allow them to draw their own conclusions), have decided that the Times, and other media outlets that have traversed the same Leftward path, whether print or TV, have been weighed and found wanting.

So too have thoughtful Americans weighed Hollywood and found it wanting. We do not like Castro or Chavez better simply because movie stars cuddle up to them and extoll their supposed virtues. We do not discount marriage’s importance in society because movie stars overuse it, ignore it or denigrate it. We do not think that drugs are a viable part of a healthy life even though two-bit pot stars with decorative horns explain on national TV that they are chronic users. We do not believe that our troops are deranged killers, even though Hollywood movies since the early 1970s have assured us that they are dangerous, amoral, often psychotic men.

Americans have also evaluated the universities, those institutions that once turned out people steeped in the cream of Western knowledge, and concluded that they’re not doing their job. For the $50,000 per year middle class Americans are expected to pay, they get children who attend sex shows, learn how to orchestrate Leftist violence, become increasingly antisemitic and anti-Israel, deconstruct the meaning out of everything, hate the troops, and do drugs. Most Americans do not like to see the values they so carefully inculcated into their children deliberately destroyed and replaced with Marxist politics and debauched social values.

Those American institutions that have tilted Left cannot understand why more and more Americans do not accept their opinions or their so-called facts at face value. They do not appreciate that Americans, having examined their own core values and assisted by the unimpeded flow of information through the internet, have weighed these institutions and found them wanting.