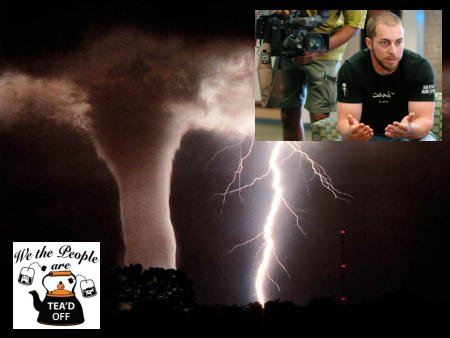 The Tea Party vs. Adam Kokesh

Recently, I posted videos of the arrests at the Jefferson Memorial by those who were dancing in violation of a court ruling prohibiting such actions at the monument. While I still stand by my original objection, which was against a heavy handed police overreaction and a violation of Constitutional rights, I have had time to ponder what was really behind this whole ‘protest.’

I believe that the Adam Kokesh, Medea Benjamin protests are meant to draw Tea Party activists, Constitutional Conservatives, Libertarians and Independents into the fray to instigate a revolution (top down, bottom up, inside out…). The protests were a deliberate provocation to involve not only the police, but patriots who sensed government tyranny and infringement. They are trying to provoke a political whirlwind to bring about chaos, violence and revolution and we dare not fall for it. Both of these individuals are Marxists and we cannot and must not stand beside them, no matter the temptation.

Medea Benjamin is one of the co-founders of Code Pink. She was also a primary organizer and participant in the flotilla for Palestine that went to Israel last year. She will be involved in the one going this summer as well. She is a progressive and an unabashed Marxist. A radical leftist whacko that is also an anti-Semite. She stands with the Palestinians and is actively trying to destroy Israel.

Adam Kokesh is just as evil. An Iraq war vet who tried to infiltrate the Tea Party, but when he started preaching revolution, he was summarily chased out. He now claims to be an anti-war activist. He is a dyed in the red progressive and Marxist with many ties to Marxist groups.

He now works for Russia Today, spreading anti-American propaganda and sowing discord and upheaval wherever he can. What he is doing is about as un-American as it gets folks. Not only is Russia Today subversive in their espoused mission, they are downright dangerous in the extreme. It was announced in April 2011, that Adam Kokesh had joined the Russian television channel Russia Today as an on-air journalist. His show is entitled: “Adam vs The Man.”

But Kokesh is just one part of this growing propaganda operation. Russia Today has various “partners” in the media business, including the Huffington Post, which is now part of AOL, and What REALLY Happened, a website that features such stories as “Israel’s Whores in Congress” and “Reflections of Comrade Fidel.” The website mostly features articles about a number of conspiracies, with a focus on the “inside job” theory that the 9/11 terrorist attacks were staged by the U.S. Government.

You should read the whole article. It details how the US media is not only very much in bed with our government, but with the Communists as well. You see, the Cold War never ‘really’ ended. It just shifted its position, slapped on a lesser red lipstick and called itself by a different name so the Communists could go on their merry way of infiltrating US entities and work at taking down our way of life. Communists never die and go away, they just change masks and tactics.

While Kokesh and Benjamin are screaming about a growing police state in the US, they are following the directions and commands of Moscow like good little comrades. If they can have Americans pitted against the police and military, then they can begin to stir revolt in the streets, giving the Marxists a perfect excuse to come down hard on the American people. Kokesh and Benjamin don’t give a rat’s ass about the Constitution or America… They want a revolt, to foment chaos and bring about the change necessary to bring in full blown Marxism under a tyrannical government. They are bringing about exactly what they appear to be protesting against. This is standard operating procedure for the leftists and many are falling for it. A number of staunch libertarians and conservatives believed Kokesh and gave him air time and face time that helped him further his seeds of distrust and hate. Are you surprised that Russia Today covered the protests heavily? For them it was good times indeed. It’s not the devil in Hell that will get you, it’s the devil among you.

More on the ‘talent’ from RT:

The bio for Kaelyn Forde, the RT reporter who covered my conference, notes that she “comes to RT from Spanish-language news network teleSUR.” The bio fails to disclose that teleSUR was launched by Marxist Hugo Chavez of Venezuela.

And thus, we see the same evil players pop up over and over again. The American public is having propaganda bombard them from every outlet imaginable. All of it meant to turn us against each other, cause dissent and to bring on a revolution.

Look at the graphic displayed on the Facebook page being used to promote the dance protests: 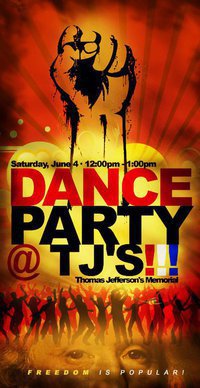 The ‘fist’ graphic is used in many, many Marxist and Communist movements all over the world.

The question is, can we ride out the whirlwind without being swept up into it and torn apart? I believe we can. But it means researching everything you see, because in many instances, things are not what they appear to be in the war between progressives and patriots. Stand, yes… Fight, yes… But make sure that we are on the right side — the side that returns us to Constitutional principles and the ideals of our founding fathers, not the side of our enemies.

And Kokesh and Benjamin are definitely the enemy.

20 thoughts on “Provoking the Whirlwind”