Van Jones Angry Speech At Netroots: “I’ve Had All I Can Stand of Fox TV,” Challenges Glenn Beck To A Debate

Call me one of the lucky ones, I’m still able to pick up a telephone and call my Dad; but I do have to speak very loud for him to hear. Mostly I talk to him via Mom; saves a lot of yelling back and forth, so we keep it simple. I tell him, “Bowl a hundred,” if he’s on the way to the bowling alley to be with his buddies; my way of saying, “I love you, Dad.”

The picture which accompanies this article was taken around the holidays; can’t remember for sure. But it was either Thanksgiving or New Year’s Day, because there were football games on the television.

Dad and Bonnie were enjoying the afternoon as he told the story of Jack and the Bean Stalk, as the two of them rocked in the chair together. There were some slight changes to the story line; I recall hearing Dad explain that it was, “1st and goal on the seven yard line as Jack went up to meet the giant.”

During the middle of the story, the old rocking chair, one which had been around since I was a little boy; that old chair gave up the ghost. Dad and Bonnie crashed to the floor; no injuries other than the chair was a total loss.

I have a long list of “Dad” stories from over the years: Dad waving at the ambulance driver, the broken front seat in his car, bread sticks at the restaurant, recovering my lost shoe at the train depot… Too many interesting stories so I’ll only share one more.

Dad had fallen asleep in his favorite chair while the rest of us finished watching a movie one Saturday evening. His internal alarm clock reminded him it was time to secure the house for the night as he wandered to the front door and bolted it, on to the side door and ending up at the sliding glass door at the back of the living room.

He latched the door and then fumbled around for the pull cords to shut the drapes; his first pull only managed to get them half way closed. In his sleep he reached for the cord only to grab hold of the wrong one; the drapes being returned to their fully opened position. Each time he reached in to grab the cord his efforts were frustrated; the drapes now dancing back and forth as the veins in his neck began to swell.

“Dick! What in the hell are you doing?” Mom had a way with words as she addressed the love of her life. Dad, eyes still closed, took a deep breath as he carefully considered his reply; not wishing to hurt the love of his life with a harsh answer.

“I’m practicing!” That’s my Dad; always looking out for what’s best for his family. For some reason my eyes just swelled with tears; must be allergy season, that’s it. “Bowl a hundred, Dad!” 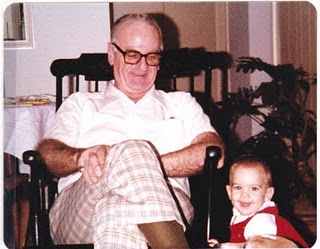