Curtis Patrick, Author
REAGAN: What Was He REALLY Like? Vol. 1. 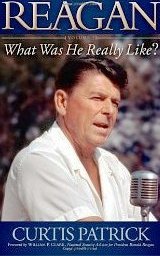 That question has been asked many times lately. My personal opinion from the perspective of those of us who lived with “The Man” 24/7 for years… the answer is no!

Many in the media, along with a number of key advisors to President Obama speculate and infer that Obama somehow practices many of Reagan’s characteristics, mannerisms and principles. It simply isn’t so. Also, it isn’t possible for Obama to do so due to his lack of knowledge, experience or concentration on the principles which had driven Reagan all of his life. Whenever Reagan made a decision it was carefully thought out and planned, not only by RR, but by those around him who presented the facts upon which the decision was based. Almost a “Ben Franklin Balance Sheet” approach. Plusses on one side and minuses on the other; along with the now famous one-page “Mini-memos.” These advisors were carefully chosen from a set of guidelines away from which Reagan never strayed. Many of the team members stayed with him all the way into the White House.

We established the Special Services Unit, a division of the Governor’s Office, days after Reagan won his 1966 landslide election as Governor of California, and the Background Investigations section to examine résumés of any and all applicants and candidates for heading up the agencies and departments of government and those who were destined to fill positions in the Governor’s Cabinet. Some of these were friends, previous associates and campaign staffers. Everyone who was not previously vetted had to stand for the “test.” This special unit interfaced with the F.B.I., local law enforcement, the U.S. Secret Service, CA Highway Patrol, CA Department of Justice (The A.G.’s Office), C.I.&I. Criminal Identification & Investigation and other agencies.

Before he ever took the Oath of Office, we were instructed by RR himself and Legal Affairs / Clemency Secretary Edwin Meese III, later U.S. Attorney General, the following: “We want to fill the top positions in the agencies & departments of CA government with knowledgeable, skilled people who are experts in their field, so screen the applicants who want to become potential appointees and disqualify them from the start, if necessary; if they can’t measure up to our standards. IF they pass, only then submit their names to our screening committees.” Some of the applicants were donors to RR’s campaign. The unhappy recipient of a turndown letter might insist on going directly to the governor to plead his case. If there were mitigating circumstances that candidate produced, the screening committee might take another look, but, if the issues in that candidate’s past were involved in illegal or criminal activities, arrest or prison records – the committees and our unit moved on down the list to the next candidate in line.

We found there were plenty of skilled, knowledgeable people available who had earned honors, awards, accolades and respect in their chosen fields and professions to more than fill the positions.

Astoundingly, these practices were not at the top of President Obama’s Priority List when he began choosing his Advisors, Czars and Cabinet Members. No, there is nothing that remotely resembles RR’s practices in the choosing of his friends, colleagues, staffers, appointees and Cabinet Members. Shockingly, Obama’s list of advisors, friends, colleagues and appointees contains many of the same names who were placed on Reagan’s ‘Unacceptable” list some forty years ago. A number were actually on our list of suspects with criminal backgrounds. Members of the Weather Underground, The Weathermen, The Socialist Party of the U.S., The Communist Party of the U.S., The Black Panthers, etc. These are and were Obama’s associates. A number have or had police records! It may be trite, but certainly seems to fit: The “Birds of a Feather” theme.

The reason this is so important is that to Ronald Reagan, his rock-solid foundation consisted of a framework of principles laid down by our Founding Fathers.

It is evident that no such framework exists in the White House today.

This is just the foundation principle outlined above which shows the differences in the two presidents.

I’d be glad to set forth other specific differences in the coming days, if you wish.

Some would be seemingly the simplest, most mundane types of practices which have been woven into the fabric of America since the 1700’s. Such as American flag protocol.
Singing the correct words to our National Anthem. When to place one’s hand over the heart. How to address the leader of another nation. When, if ever, to bow to that leader. How to recognize the National Anthem of another well-known country during the Official Toast to that country’s queen and her citizens; when YOU and your five hundred or so minions are THEIR guests! How to locate an experienced White House Protocol Chief.

Other key subjects comparing Reagan with Obama would not be complete without including: The dubious operations of the present U.S. Attorney General. The plethora of untruths spewing from President Obama. False figures spewing from all manner of Special W.H. Task Forces and “officials,” etc. The main difference seems to be one of direction, and this president and his administration don’t seem to know what they’re doing.

Curtis Patrick, Author
REAGAN: What Was He REALLY Like? Vol. 1.

One thought on “Is President Obama Becoming More Reaganesque?”