The stench of this news from Houston, Texas has reached the United Kingdom. Now, eyes throughout the world will be watching this phase of the Marxofascist insurrection in America, as it experiments with phasing out even the mention of God.

Veterans BANNED from saying ‘God’ or ‘Jesus’ at military funerals

Veteran groups are taking legal action after they say they were banned from saying the words ‘God’ and ‘Jesus’ during funeral services at the Houston National Cemetery. Three veterans organisations are to take the Department of Veteran Affairs to court over claims that they have censored prayers and demanded that words be submitted in advance for government approval.
Cemetery officials ordered volunteers to stop telling families ‘God bless you’ at funeral and said that the words ‘God bless’ had to be removed from condolence cards, according to court documents filed this week in federal court. 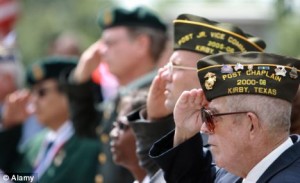 Challenge: Veterans are taking the government to court over the ban on the words ‘God’ and ‘Jesus’ at military funerals

The groups, the Veterans of Foreign Wars, The American Legion and the National Memorial Ladies, said that officials have created ‘religious hostility’ and are violating the First Amendment.‘The hostile and discriminatory actions by the Veterans Affairs officials in Houston are outrageous, unconstitutional and must stop,’ said lawyer Jeff Mateer, who is representing the groups.

What does one expect, in a nation with Barack Obama its neo-Marxist putative president and communist collaborator, Leon Panetta, its new Secretary of Defense? And this is the “audacity” we may expect, as the U.S. Senate, after many calls warning of Panetta confirms him, 100-0.

The Department of Veterans Affairs is chaired by Gen. Eric Shinseki (ret.) Obama appointee and member of the hardcore assembly of “communitarian” globalist “thought leaders,” the Council on Foreign Relations (CFR) — another puzzle piece in its place.

Treasury Secretary, Timothy Geithner and outgoing Defense Secretary, Robert Gates also belong to the illustrious CFR and thus identify with its globalist ideological objectives. In 2009, coincidentally the first year of the Obama administration and just after the Mortgage Meltdown, its TARP-rape, then the serial “stimulus act” rape of American wealth, the CFR become much more overt about their goals in globalist authoritarianism and stealth imperialism. They call it “global governance,” as if the –ance suffix makes it seem different than –ment. See:

Funny how this turns out: globalism up, America and even God down (they wish).