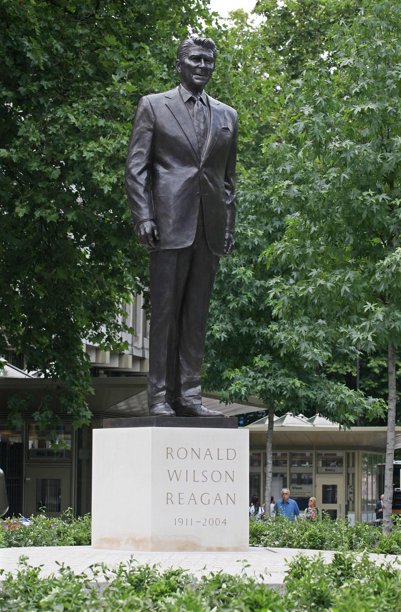 Britain is holding a tribute to Ronald Reagan on our Independence Day today. Gotta love the Brits – evidently they truly grasp the meaning of freedom and what it means to America.

As Fourth of July celebrations get under way across the United States, London will hold its own tribute to America’s 40th President, Ronald Reagan, with the unveiling of a bronze statue outside the American embassy in Grosvenor Square.

Former president Reagan will stand alongside other celebrated US heads of state such as Franklin D. Roosevelt and Dwight D. Eisenhower and was considered important enough for Westminster City Council to break its rule specifying that ten years must pass after a subject’s death before they can be immortalized in statue form.

Former US Secretary of State Condoleezza Rice will be in London for the unveiling of the memorial, along with British Foreign Secretary William Hague. Baroness Thatcher, Reagan’s closest foreign ally and one half of the ‘Special Relationship’ which came to epitomize the 1980s and contribute to the demise of the Cold War will probably be too frail to attend the ceremony celebrating the man she referred to as “the second most important man in my life.”

American patriots miss the Gipper more and more every day… We salute Britain as our friend and ally. Not so much our current Destroyer-In-Chief.

“He connected with the common person in the United States and in many parts of the world, and I think that that’s a rare gift, we haven’t seen it since. Bill Clinton was very good at empathy, President Obama was very good at articulating a vague notion of hope and change, but not a clear vision of what that hope and change would look like or feel like and that was the difference with Ronald Reagan,” she explained.

Jacobi told CNBC.com he would be “appalled” with the current stalemate on Capitol Hill and “the fact that America hasn’t had an approved budget in two years, the fact that the leaders have largely been absent from the debate and have not really gotten in and gotten their hands dirty… I think he’d be shocked,” she said.

Indeed Reagan would have been appalled and horrified at what is transpiring today in the halls our so-called leaders dwell in.

Here’s to Reagan and his memory. May a new Reagan come forth and right the American ship before she sinks.

One thought on “You Gotta Love the Brits”