From the Communist Party of China International Party website: 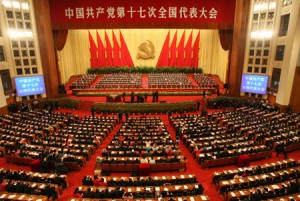 The CPC had 80.269 million members by the end of last year, Wang Qinfeng, deputy head of the Organization Department of the CPC Central Committee, said at a press conference.

The Party grew from only about 50 members at its birth to nearly 4.5 million when the People’s Republic of China was founded in 1949.

The two leading groups in new members were college students and people at the frontline of production or work, such as industrial workers, farmers, herders, and migrant workers, both accounting for more than 40 percent of the total new Party members.

Of the Party’s members, 18.03 million were women and 5.338 million were from ethnic minority groups in 2010, accounting for 22.5 percent and 6.6 percent of the total respectively, according to Wang.

In terms of occupation, the group of farmers, herders and fishermen, numbering 24.427 million, was the largest, while 6.989 million Party members were workers, he said.

Another 6.812 million members worked in Party and state agencies, and 18.413 million were managerial staff and professional technicians working in enterprises and non-profitable organizations, and 2.539 million were students, according to Wang.

Meanwhile, a total of 32,000 people were expelled or withdrew from the Party last year, most of whom were forced out to ensure the advanced nature and purity of the CPC, Wang said.

Besides enlarging its membership, the CPC continued to expand both in public and private sectors last year.

Party organizations had been established in nearly all government agencies, state-owned and private enterprises, and social organizations.

They had also been set up in 99.9 percent of villages and urban communities and in all associations of lawyers and certified accountants, Wang said.

Regarding the 3 million migrant worker Party members, Wang said that the Party had managed to have them join Party organization activities in their current place of residence so that they could stay connected with the Party.

About the ongoing elections of all Party committees at the provincial, municipal, county, and township levels nationwide, Wang vowed zero tolerance on people who acted in corrupt way in the process.

Reelections of Party committees have been completed in 47 percent of China’s 34,000 townships and about 10 percent of 2,700 counties, according to Wang.

The death of communism, is unfortunately, a dangerous illusion.