In an article published Tuesday entitled “Casey Anthony: The Candidates Respond,” Salon Magazine smeared Sarah Palin and several Republican presidential candidates with faked quotes reacting to the verdict in the Casey Anthony trial. The faked quotes, especially those falsely attributed to Michele Bachmann and Palin, made their way around the Internet this week, adding to the media-driven campaign of hatred against leading Republican women. 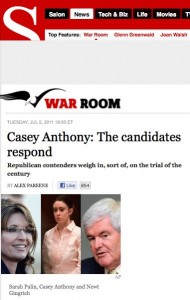 Palin was smeared as a separation-of-powers ditz, accusing President Barack Obama of not getting involved in the Anthony case:

“Once again we see, with our nation in crisis, President Obama stands by and does idly nothing while an injustice is committed here in this glorious nation of ours … Why the strange silence, Mr. President?” 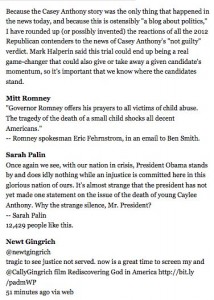 Bachmann was smeared as a racist and anti-Muslim kook in a faked Sean Hannity interview:

“… people all over the place are asking me, why, in Barack Obama’s America, someone who murders a baby who happens to be white doesn’t get punished…they’re worried about the Muslim Brotherhood, which has clear ties to terror groups dedicated to creating a worldwide Islamic caliphate, and they’re worried that Eric Holder’s Justice Department isn’t going to do anything about it if the Brotherhood or another group comes for their children.”

Alex Pareene, who is described at the end of the article as “Alex Pareene writes about politics for Salon,” made up the quotes in apparent frustration that Republican candidates had not waded into the Anthony murder trial controversy. The new media standard now seems to be if a Republican won’t say something outrageously foolish, the media will make up the quotes they want and destroy the candidate anyway.

The article is so poorly-written (and without further clarification) that the author’s attempt at satire is lost upon the reader. The quotes are presented as sourced quotes and transcripts. 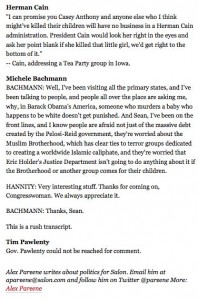 “Because the Casey Anthony story was the only thing that happened in the news today, and because this is ostensibly “a blog about politics,” I have rounded up (or possibly invented) the reactions of all the 2012 Republican contenders to the news of Casey Anthony’s “not guilty” verdict. Mark Halperin said this trial could end up being a real game-changer that could also give or take away a given candidate’s momentum, so it’s important that we know where the candidates stand.”

The faked Salon quotes were picked up by the sites AllGov.com, Death and Taxes, FreakOutNation and other smaller sites.

FreakOutNation posted their article with the headline: “Sarah Palin and Michelle Bachmann on Casey Anthony Verdict: It’s Obama’s Fault” and the lede:

“Republican talking points, which state that everything is President Obama’s fault – even encompasses the Casey Anthony trial. No, really.”

The article includes the faked Salon quotes. At the end, an update appears that notes Pareene “may have invented this.”

But the damage was done. The article was liked by over 2500 Facebook users and spread to Twitter.

Thursday evening, Pareene took to Twitter to own up to the faked quotes:

“I was really, really wrong about how obvious the satirical intent of my silly “candidates talk about Casey Anthony” thing was, it turns out” and “To set the record straight: jokes, bruv”.

Here are the faked quotes in order. Note that after suggesting some of the quotes are real, Pareene does not differentiate between real and faked quotes. In fact he presents each of them as real even though all them were faked, ending with a note that he was unable to get a quote from Tim Pawlenty.

“Governor Romney offers his prayers to all victims of child abuse. The tragedy of the death of a small child shocks all decent Americans.”

– Romney spokesman Eric Fehrnstrom, in an email to Ben Smith.

Once again we see, with our nation in crisis, President Obama stands by and does idly nothing while an injustice is committed here in this glorious nation of ours. It’s almost strange that the president has not yet made one statement on the issue of the death of young Caylee Anthony. Why the strange silence, Mr. President?

@newtgingrich
tragic to see justice not served. now is a great time to screen my and @CallyGingrich film Rediscovering God in America http://bit.ly/padmWP

51 minutes ago via web

“I can promise you Casey Anthony and anyone else who I think might’ve killed their children will have no business in a Herman Cain administration. President Cain would look her right in the eyes and ask her point blank if she killed that little girl, we’d get right to the bottom of it.”

BACHMANN: Well, I’ve been visiting all the primary states, and I’ve been talking to people, and people all over the place are asking me, why, in Barack Obama’s America, someone who murders a baby who happens to be white doesn’t get punished. And Sean, I’ve been on the front lines, and I know people are afraid not just of the massive debt created by the Pelosi-Reid government, they’re worried about the Muslim Brotherhood, which has clear ties to terror groups dedicated to creating a worldwide Islamic caliphate, and they’re worried that Eric Holder’s Justice Department isn’t going to do anything about it if the Brotherhood or another group comes for their children.

HANNITY: Very interesting stuff. Thanks for coming on, Congresswoman. We always appreciate it.

This is a rush transcript.