MSNBC’s Contessa Brewer, you may remember just yesterday said the attack on Rupert Murdoch at a hearing encapsulated what the British were feeling.

Today, Contessa “educated” a conservative Representative that if Congress does not raise the debt raising, the country would be “reverting into a depression.” Rep. Mo Brooks (R-AL) said he disagreed which prompted the MSNBC host to ask him if he had a degree in economics.

From: No Lawyers, Only Guns and Money

‘Gunwalker’ could have major impact on Mexican politics

In Glenn Beck’s keynote speech at the Christians United for Israel summit in Washington, D.C.Tuesday July 19th, he boldly stated, If the world goes down the road of dehumanizing Jews again, “then count me a Jew and come for me first.”

The cult of Obama. Time for an intervention… 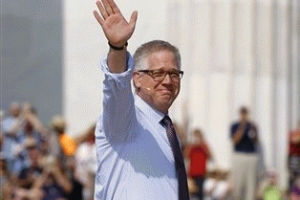 Receiving numerous rousing ovations and thunderous applause, FOX television personality Glenn Beck told an audience of over 5000 gathered at the Christians United For Israel (CUFI) national summit in Washington that if the pernicious trends in global anti-Semitism culminate in another genocide “then count me as a Jew, and come for me first.” Mr. Beck delivered these remarks as part of his keynote address at “The Night to Honor Israel” gala banquet at organization’s sixth annual convocation on Tuesday evening, February 19th.

Having just returned from a trip to Israel where he addressed the Knesset Committee on Immigration, Absorption and Diaspora Affairs at the invitation of Deputy Knesset Speaker Danny Danon, Mr. Beck opened his speech by announcing his donation of $10,000 to the “CUFI On Campus” student organization that battles anti-Israel propaganda on hundreds of college and university campuses across America. Referencing his emotional trip to the Auschwitz-Birkenau concentration camp, he stated his often-repeated belief that the inherent rights of the US Constitution and those delineated in the Declaration of Independence were a mandatory requirement for the prevention of evil of this magnitude from occurring. “The founding fathers had the answer 150 years before Hitler showed up,” he said, but reminded his audience that for two millennia, the Jewish people were not accorded those rights in the countries in which they resided.

Until the modern State of Israel was established in 1948, he said the Jews “have had no home base” and added that “this is why the nation of Israel is vital.” Recalling the painful history of the Jewish nation, he intoned, “They have been smeared. They have been maligned. But to our shame as human beings most of all, they have been forgotten in times of need.” Speaking directly to the Jewish people he said, “No one can protect your rights better than you. To rely on others is to ensure economic slavery at best, and death camps at worse.”

Spotlighting the existential siege that the Jewish state finds herself under by the looming Iranian nuclear threat and the forces of radical Islam in the Middle East and throughout the world, Mr. Beck concluded his address by issuing stern warnings to the enemies of Israel and the Jewish people that “times have changed” and the Jews would no longer stand alone in any potential confrontation.

“This is still America 2011. We are not the Christians of the Crusades. We are Christians United For Israel,” he declared.

Reiterating Mr. Beck’s sentiments was Pastor John Hagee, founder and chairman of Christians United For Israel who also delivered an impassioned address. “Mr. Ahmadinejad: Do not threaten the people of Israel and the people of America,” he said. Citing those miscreants throughout history who have sought to eradicate the Jewish people, he noted, “Look at Pharoah of Egypt and Haman of Persia in the story of Purim and you will have some idea of G-d’s punishment for you.”

Quoting Winston Churchill who said, “Courage is the first of qualities; courage is everything,” Pastor Hagee exhorted his acolytes to “dare to be yourself in the face of adversity; to have the courage to admit the truth.” Acting on his words Pastor Hagee then declared, “President Obama is not pro-Israel and he has broadcast that around the world. President Obama has told Israel not to build homes in Jerusalem. He has no right or authority to tell the Jewish people what to do.”

Advising the President to vent his rancor at those nations that are adversarial to the United States, he said, “Go tell Iran, China and Russia what to do. Israel is not a vassal state of the United States. It is free to determine their borders and their destiny. They are free to retaliate against anyone who attacks them.”

Speaking of the “toothless sanctions” that have been imposed on Iran, he proffered his belief that “Iran will become nuclear” and if attacked, “the liberal media would blame Israel for starting a war with Iran.”

Addressing former White House Correspondent Helen Thomas who achieved dubious notoriety in June of 2010 when she told an interviewer that “Jews should get the hell out of Palestine” and to “go home to Germany, Poland and the United States,” Pastor Hagee said, “Helen, the Jews are not going anywhere. They are home.”

Also addressing the assemblage was Michael Oren, the Israeli ambassador to the United States who spoke of the meritorious deeds of such righteous gentiles as Major-General Orde Charles Wingate, a British Army officer and creator of special Jewish military units in British mandated Palestine in the 1930s and in World War II. Ambassador Oren said that as a devoutly religious Christian, Wingate became an ardent supporter of Zionism, seeing it as his religious duty to help the Jewish community in Palestine form an independent Jewish state.

Also lauding the multifarious accomplishments of the late Washington state senator, Henry “Scoop” Jackson, Oren said, “As a child Senator Jackson was taught to respect Jews in the Christian home he grew up in” and credited him with sponsoring legislation aimed at freeing Jews from the former Soviet Union. In 1974, while in the Senate, Jackson co-sponsored what has come to be known as the Jackson-Vanik amendment with Charles Vanik sponsoring it in the House. The amendment was intended to help refugees, specifically Jews, to emigrate from the former USSR. He recalled that such celebrated Soviet prisoners of conscience such as Natan (Anatoly) Sharansky who currently holds the position of chairman of the Jewish Agency in Israel, praised Jackson as a “defender of Israel; a torch bearer of faith.”