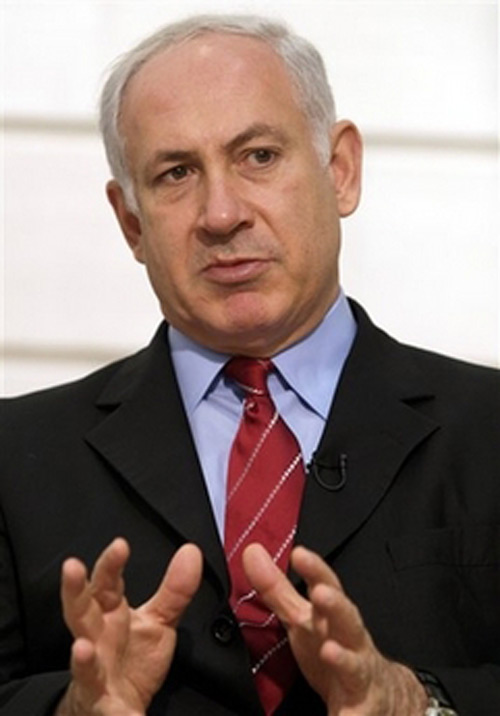 Greeted with over 10 minutes of applause and enthusiastic cheers, Mr. Netanyahu extended his appreciation to Pastor Hagee for his “unwavering support and commitment for Israel” and for those Christian supporters of Israel who have the “courage to stand up and speak the truth.” Sharing the same sentiments that he did in his speech before the Joint Sessions of Congress in late May, Netanyahu said, “Israel is not what’s wrong with the Middle East; it’s what is right about it. Israel is a country that draws from the same well as you. Both America and Israel were forged on the same principles, the same ideas and so we have shared values and common hopes for the future.”

Drawing the largest applause was Netanyahu’s reference to the biblical connection of the Jewish people to their ancestral homeland. “The Jewish people are not occupiers in the land of Israel. We have returned to the land of our forebearers; of Abraham, Isaac, Jacob, David and Solomon and we are here to stay.” Speaking of Israel as America’s only reliable ally in the Middle East, Netanyahu underscored Israel’s initiatives at the peace table. “This conflict is not about Israel refusing to accept a Palestinian state. Israel wants peace with the Palestinians, but we can’t build a peace based on lies.”

Also addressing the “Middle East Briefing” session was Malcolm Hoenlein, the Executive Vice Chairman of the Conference of Presidents of Major American Jewish Organizations. Speaking of the significance of Shiva Asar B’Tammuz (the 17th of Tammuz), he said, “Today we begin a three week period of mourning for the Jewish people as we remember the destruction of our Holy Temple and other calamities that befell us throughout history.” Speaking of the Torah portion that examines the narrative of the “miraglim” (spies) who represented the 12 tribes of Israel, he asked his biblically well versed audience; “If I would ask you to provide the names of those spies who returned from the land of Israel with a negative report, would you remember their names? The answer is no because those who stand with Israel are remembered for posterity and those who decry Israel are forgotten.”

Spotlighting the nefarious international campaign to abrogate the biblical and religious heritage of the Jewish people and the land of Israel that are so inextricably intertwined, Mr. Hoenlein said, “Those who would dismiss our past also risk our future. For example, there are those who question Judaism’s undeniable ties with Rachel’s Tomb and thus would like to transform it into a mosque. There are those who say that our temples never existed. Our bible tells us that Abraham purchased the city of Hebron, in broad daylight, in full view of all, because he knew that in the future its ownership would be challenged. Today there are regular archeological discoveries which serve as concrete proof of the fact that when you open your bibles, the land of Israel comes to life. We must ask ourselves; why did G-d give this generation the privilege of uncovering this Jewish connection. What does it mean for us in the future?”

Mr. Hoenlein concluded by telling the members of CUFI that when they stand for Israel, they stand for America. He called them “an army of truth” who also stands “with their their forefathers and foremothers and will be thanked by their grandchildren for doing so.”

Elliott Chodoff, an American born political and military analyst and an IDF reserve major delivered an erudite account of the history of radical Islamism during the briefing. Replete with a plethora of hard facts, Mr. Chodoff outlined the genesis of such organizations as the Muslim Brotherhood, Hamas and Hezbollah. “The Muslim Brotherhood was founded in Egypt in 1928 and its leader imbibed the Nazi ideology that focused on the extermination of the Jews.” Noting that Iranian cleric Ayatollah Khomeini of Iran who came to power during the Islamic revolution of 1979 was active in disseminating the Muslim Brotherhood ideology to school children said that it was he (Khomeini) who was the first to label Americas as “the Great Satan” and referred to Christians as the enemies while declaring that America is run by Jews.

American perception of Khomeini was skewed according to Mr. Chodoff, who revealed that at the time, the US representative at the United Nations Andrew Young said that Khomeini was “a great humanitarian” and dismissed his flagrant hostility. He added that Hezbollah (the party of G-d) that was founded in 1980 is currently “the most dangerous organization on earth” and is responsible for developing the terrorist strategy of suicide bombings with most of them directed at American targets. Recalling the Hezbollah orchestrated bombing of the US Marine barracks in Lebanon in 1982 in which 241 American military personnel were killed, Chodoff said that it was weakness on the part of the US as manifested by their decision to leave Lebanon in the throes of terrorism that emboldened the enemy. “When Hezbollah saw that Americans were taking leave of Lebanon they knew they could push us out”, he said.

Citing Israeli military intelligence, Chodoff was quite forthright in his analysis of both the position of Israel and America during a possible attack by Iran. “Israel cannot survive a nuclear attack. You cannot trust a nuclear deterrent. Israel cannot wipe out Iran’s nuclear arsenal but the US can.” Prompting the US to take the lead in the war against the nascent Iranian nuclear buildup, Chodoff added that the Iranian regime has been developing bombs that have the capability of hitting US cities on the East coast

The briefing session also included an informative address by Colonel Ben Tzion Gruber of the Israel Defense Forces who is also a renowned motivational speaker. Offering a hands-on glimpse into the scrupulous ethical and moral code of conduct that the IDF is predicated upon, Col. Gruber took his audience through a real-time video and slide presentation that concretely described how the IDF takes great pains to avoid civilian casualties during military strikes and during wartime. He said that the nomenclature of the code of ethics can be divided into three categories. “Necessity”, he said, means that force is only employed for accomplishing the mission, and “Distinction” means that every measure is taken so that innocents will not be harmed, and “Proportionality” means that collateral damage is only used in proportion to the threat.