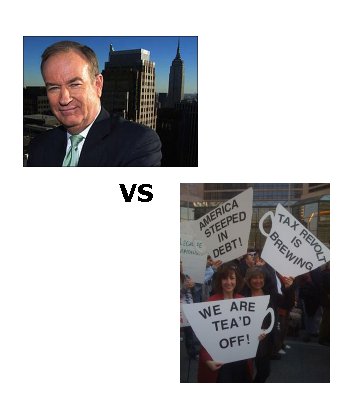 I tuned into Fox News this morning just in time to catch Bill O’Reilly calling the Tea Party and Constitutional Conservatives “unreasonable” for not striking a compromise with the Left over the debt ceiling. Really Bill? You really want to go there, fine… Let’s dance.

How is it ‘unreasonable’ to want to Cut, Cap and Balance? You say you are for reducing our debt and lowering the income tax percentages, but you also want to close tax loopholes to the wealthy. You sound just like a card-carrying Progressive. You don’t sound moderate to me – you sound positively Marxist. You might as well be a clone of Harry Reid who called Cut, Cap and Balance “radical” and said it was “one of the worst pieces of legislation to ever be placed on the floor of the United States Senate.” But listen to Reid previously:

My how an election makes a difference, huh? Is it too much for you to understand that those with the wealth create jobs in this country? If you strangle them, you strangle Americans and you silence innovation and entrepreneurship.

You say the Tea Party is self-destructive. No, they actually want to save the country. Your suggestions will not handle our crushing debt. What you do suggest does kick the can down the road and all but ensures we will finish collapsing economically from within. I am sure you were congratulating yourself with what you considered to be a witty comparison between the Tea Party and Abbie Hoffman of the 1960s. Abbie Hoffman was one of the “Chicago Eight” from the 1960s and 70s – a true Communist radical. Hoffman was arrested while protesting the Vietnam War during the 1968 Democratic National Convention in Chicago. How dare you compare the Tea Party to him.

You have shown time and time again on air that you do not understand the economic situation currently, or even what the reality of a default entails. If the debt ceiling is not raised, Armageddon will not ensue. We pay the do-or-die obligations on the table such as the military and social security commitments. Then we take a hatchet to every damn Progressive department and project on the books. And you want to talk austerity? America needs to show the Marxist/Progressive infestation in our government what true austerity looks like when it comes to governmental waste and abuse.

The Tea Party is being viewed as radical because talking heads such as yourself keep pushing the meme. What is radical are the Communists/Marxists/Progressives/Socialists that are ruling over the majority of Americans and forcing our country to submit to dictatorial mandates and who are actively trying to destroy us from within. The Yippee Movement of the ’60s blew up because it was radical, violent, insane and Marxist. You can’t even begin to compare that to the Tea Party Movement.

The Tea Party and conservatives will keep going. Cut, Cap and Balance was voted down today in the Senate along partisan lines – a 51-46 vote. But we will not quietly let RINO Republicans make a grand deal with Obama falling for the same old lies right out of a Charlie Brown cartoon where Lucie yanks the football away after promising once again not to. Our country is broke and is at a dangerous tipping point. We can recover if we cut spending massively and lower taxes. But the eat-the-rich mentality of the Progressive Left that you seem to share is suicide. And blaming the Tea Party who seem to be the only movement that really cares about saving the US, is like blaming the victim.

So as our debt soars well past 14.3 Trillion on towards 15 and 16 Trillion, we still have not decided how to stop ourselves from stampeding off a cliff to the fiscal rocks below. And while real, patriotic Americans fight tooth and nail to get the politicians to cut their spending and to stop them from financially stealing every last cent out of our coffers with their evil, hideous taxes, the RINOs keep flailing around with no plan and no action and the Progressives continue with their Cloward and Piven assault. And they will keep on blaming whoever is handy, especially the Tea Party. You know you are on the right path when you are as hated as Tea Party conservatives are.

As David Limbaugh said so eloquently, “Never trust anything from a gang.” The tax cuts that the Gang of Six promise is smoke and mirrors and not real. It is a vague delusion at best. Their plan will raise the debt ceiling and the spending and little or no reductions will take place. Shame on Senator Crapo from my state of Idaho. He should know better. It’s a treachorous plan that in the end will actually raise taxes by at least 1 Trillion.

So tell me Bill, once again, who the radicals are? The ones who want to stop the insane spending and cut taxes for real, or the ones who want to raise the debt ceiling, keep on printing funny money and drink champagne as the US Titanic sinks into oblivion? We are sooo much better off for all our politicians have done in the last 2 1/2 years economically – not. You should go snuggle with the Left and leave the real work to the big boys and girls in the Tea Party.

8 thoughts on “The Reasonableness of Bill O’Reilly”