The communists and socialists have long wanted to remove all barriers to immigration into the United States, and their man Barack Obama wants to help. 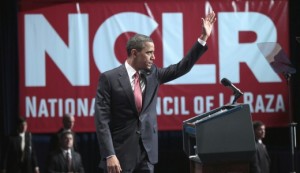 President Barack Obama was welcomed by thousands attending the National Council of La Raza’s annual conference in Washington D.C. this week, where he delivered a major speech.

Obama highlighted the contributions Latinos in his administration are making on behalf of their communities and the American people.

He mentioned a recent meeting at the White House that brought together 100 Latino officials who met with Latino leaders from across the country.

At that meeting Obama recalled saying, “We need your voice. Your country needs you. Our American family will only be as strong as our growing Latino community…”

Five years ago, immigration reform was a bipartisan effort and Republicans helped draft the DREAM Act, said Obama. But today many of those GOP leaders are walking away from any reform, he continued.

“Feel free to keep the heat on me and on the Democrats. But you should know the Democrats and your president are with you. Don’t get confused by that,” said Obama.

“I need you to keep building a movement for change outside of Washington, one they cannot stop” he added. “I will be there every step of the way. I will keep up this fight.“

In conclusion, Obama urged unity. “It’s up to us, Latino, black, white, Asian, Native American, gay, straight, disabled,” to continue the stories of those who sacrificed in order to give their children a better future.

During the conference a straw poll was conducted in partnership with Lake Research Partners and Revolution Messaging via text message with 547 supporters and NCLR attendees.

Janet Murguía, NCLR president and CEO said, “This should be a wake-up call to politicians on both sides of the aisle that inaction on this issue will be a huge factor in the upcoming elections.”

For the real reason Obama and his Marxist allies want to eliminate immigration controls, check out this 2009 speech from the country’s top Latino immigration activist, SEIU vice president Eliseo Medina.

Medina is currently leading SEIU efforts to achieve comprehensive immigration reform that “rebuilds the nation’s economy, secures equal labor and civil-rights protections for workers to improve their wages and work conditions and provides legal channels and a path to citizenship.”

Both Medina and Obama have ties to the Chicago local of Democratic Socialists of America.

Speaking of Latino voters, Medina said “when they voted in November, they voted overwhelmingly for progressive candidates. Barack Obama got two out of every three voters that showed up.”

That’s what this is all about folks – votes and socialist power.

2 thoughts on “Obama and Marxists March in Unison on Immigration”