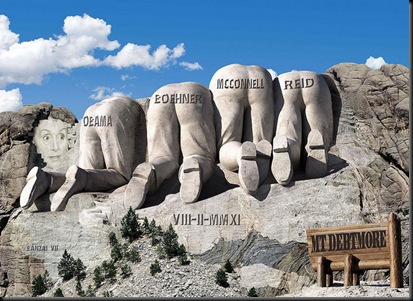 Lost in all the politics of raising the debt ceiling is a simple understanding of why it is so dangerous to do so.

The government-controlled media is trying to ensure that the public doesn’t have the facts, lacks a clear understanding of the problem and chooses sides based on emotion.

The fact is, at the end of 2008, the Congressional Budget Office (CBO) reported, “At the end of 2008, that debt equaled 40 percent of the nation’s annual economic output (a little above the 40-year average of 37 percent). Since then, the figure has shot upward: By the end of fiscal year 2011, the Congressional Budget Office (CBO) projects federal debt will reach roughly 70 percent of gross domestic product (GDP) — the highest percentage since shortly after World War II.”

The entire US Gross Domestic Product (GDP) for 2010 was $14.62 Trillion. The US debt ceiling currently stands at $14.294 Trillion, which was exceeded in May of 2011. Obama and Congress will be raising the debt ceiling well above our US GDP. Does this make America economically stronger or weaker?

To clarify what the rating agencies said, “Standard & Poor’s and Moody’s credit rating services issued warnings that United States could be downgraded because of the continued large deficits and increasing debt.”

To say that our government is simply spending more than it takes in is an understatement when it comes to the out-of-control spending we’ve experienced under President Obama; what he’s doing is dangerous. He has spent about $12.2 Trillion in just 3 years; that’s $5.15 Trillion more than the approximate $7.05 Trillion that was given to him by taxpayers.

Obama has made America the largest debtor-nation in the history of the world and fully intends to keep spending.

To put this into perspective, let’s look at it this way… It’s like a person spending $86,500 a year when they only bring home $50,000. How long will creditors keep loaning money to this person… especially if this person says they refuse to meaningfully cut their spending and instead expects to increase it every year?

So, if you’re not screaming for Obama to stop spending, why not? Raising the debt ceiling without significant strings attached gives him the blank checks he needs to plunge us even further into debt. He refuses to cut spending and dishonestly threatens our creditors, seniors and others in hopes they’ll support him out of fear. He’s historic alright; no President in the history of our nation has ever threatened its citizens or its creditors in this way.

Obama isn’t spending our money to help improve the lives of America’s poor, seniors, veterans, homeless, minorities or others we care deeply about. Here’s just a taste of his real priorities… where he’s been spending our money and what our kids and grandkids will be expected to repay for decades to come:

$880 Billion is being spent on these items alone in 2011. Are these discretionary expenditures worthy of collapsing America’s economy at a time when we need to reign in spending? If Obama continues to refuse to cut spending, that’s just what will happen.

Don’t be fooled by the propaganda coming from Obama and his regime – to include his MoveOn.org pals. They’re doing George Soros’ bidding. If you haven’t heard, Soros wants a ‘managed decline’ of our dollar and an economic collapse is exactly what he wants. Obama’s actions are clearly leading to what Soros wants.

It’s dangerous to raise the debt ceiling without significant cuts and caps on Obama’s spending and a legislative balanced-budget amendment to prevent future Presidents from doing what Obama’s doing to America.

8 thoughts on ““Raising the Debt Ceiling” For Dummies”