The Congressional Black Caucus has been touring the country in recent weeks, attacking the “Tea Party,” rallying black people behind Barack Obama and agitating for socialist public job creation schemes.

The CBC overlaps considerably with the Congressional Progressive Caucus and is , if that is possible, even more socialist in its outlook.

Manning Marable, a leader of both Democratic Socialists of America and the Committees of Correspondence for Democracy and Socialism, wrote in 2003:

Writing in Granma April 7 2009, Fidel Castro in The seven Congress members who are visiting us gave a history of the CBC and its relations with Cuba:

An important US political delegation is visiting us right now. Its members belong to the Congressional Black Caucus (CBC) which, in practice, has functioned as the most progressive wing of the Democratic Party.

The Congressional Black Caucus was founded in January 1969 by the 12 African-American legislators who were members of the U.S. Congress at that moment. During the first 50 years of the 20th century only four African Americans were elected to Congress.

Presently, as a result of the struggles they have waged, the CBC has 42 members. Several of its representatives have maintained very active and constructive positions on Cuba-related topics.

The almost lone exception to CBC’s socialism has been Florida freshman Allen West, the caucus’ only Republican.

Now after some particularly egregious remarks from the likes of Indiana’s Andre Carson, Congressman West is seriously reviewing his CBC membership.

This shouldn’t be a hard decision Lt. Colonel West.

There are some stories which touch us at the very core of our being, tug at our heart and bring tears to our eyes. During these very troubling times, it seems that all the news is bad. Many of us wish for the days when life was simpler and there were stories on the news that made us feel good, rather than as if the entire world has turned upside down. The following true story is guaranteed to bring warmth to your heart, if not tears to your eyes, and came to a happy ending within the past week.

The story begins in 2004. Smoky, a two year old Blue Weimar, was registered with AKC as Smoquee Jo. Smoky, as they called her, lived with her “mom” and her “mom’s” two year-old daughter. Smoky was very protective of the infant and would circle and pace by her playpen anytime someone visited. As the result of a divorce, Smoky was taken by the husband and later sold to a back yard breeder who used her for breeding during the next five years. When she was no longer profitable for him, she was abandoned and picked up by a kill shelter.

Smoky’s days were now numbered as she remained in the kill shelter. Just days before she was to be euthanized, Cindy Lowery of Pup Squad Cypress, a group who rescues abandoned dogs and cats and looks for homes in which they can be permanently placed, came to the shelter to look over the dogs. Normally Cindy would not have taken a seven year old dog, but there was just something about this old dog that said, “Please save me.” Cindy was not able to leave her to be put to death.

She took her and nursed her back to health. She named her Skye, and after treating her for severe heartworms, began searching for a forever home. The search lasted over a year and a half. So many families tried her, but she always ended up back with Pup Squad. Did God have a plan for Skye or was she just a survivor?

Then one evening as Jenn, who was fostering Skye at the time, was waiting for football practice to end, she sat with Cindy and they started discussing Skye. They had pretty much given up hope of finding a forever home, were coming to believe that she would be considered a “failed foster” and be living with Jenn forever. An 80 pound permanent addition to their family was something not everyone was happy about.

This is where the story becomes extremely interesting.

That same night, Skye’s “mom,” her original owner, dreamed about her! At work the next day she was talking about her old dog with a coworker who asked what a “Blue Weimar” looked like. She pulled up “Petfinder” and low and behold, the second picture she saw looking back at her was her dog! (Though older, she knew immediately it was her!) Her heart started racing and she was shaking as she e-mailed Pup Squad Cypress.

This is going to sound strange, so bear with me, but I think you have my dog (I pray it’s her). Could you please send me a full body picture with view of her tail? It’s a huge shot in the dark, but could you see if she responds to Smoquee (pronounced Smokey)? She was registered with AKC as Smoquee Jo. I lost her in my divorce in 2004 and he sold her without contacting me just weeks after the divorce. She was about 2 years old at the time. She is more loyal to females than males – the very best dog I have ever owned, I have pictures but none digital, she does okay with other dogs but she is alpha. I talk about her constantly still, even though I have remarried and have my own rescues, but she was in my dream last night (I sound nuts I know, but I am crazy about my animals). I would love to see if it’s her, will pay whatever is needed and I am dying to see her. I can’t even explain how very much I love my Smoquee Jo. She was the protector of my little girl when she was an infant, and would circle and pace by her playpen anytime someone visited. I have a million stories and I wasn’t even the original owner!!! Please call or e-mail me with more info, I am dying to see her!!!!

Within minutes of receiving the e-mail, Cindy was on the phone with Jenn. Both were in total shock. Jenn spoke to Skye’s “mom” on the phone and was asked if Skye had a slit on her ear. Jenn almost dropped the phone, because she did have one. Skye’s “mom” said that she had broken out of her kennel a few times when she was young. That was Jenn’s biggest problem with Skye, because she had broken out of 2 kennels. The age also matches up with Skye’s age.

Skye’s “mom” went immediately to her boss and told her that she had to leave work early. She picked up her daughter and together they drove an hour to Jenn’s house.

Cindy also drove to Jenn’s to witness the reunion. It had been seven years and they both wondered if Skye would remember her “mom.” Tears were streaming down both of their cheeks as they watched Skye run over, love on her “mom,” and lick her face, just as she had as a puppy. They were shown photos of Smokey when she was young and lived with her and her baby daughter who is now 8. They were told stories of how Smokey tore her ear and broke her tooth. How she would watch over the baby and how she would swim at the lake. Though 5 years are unaccounted for in Smokey’s life, (while she was bred, left outdoors and then abandoned) she will now be able to live her remaining years with the family she loves, the one she started her life with.

Was it a match made in heaven? You tell me…..

Author’s note: For anyone in the Houston, Texas area looking for a dog, or simply wishing to contribute to this worthy cause, please visit the Pup Squad web page at: http://www.petfinder.com/shelters/TX1261.html.

You are cordially invited to join us and be part of the historic CNN/Tea Party Express Republican Presidential Debate in Tampa, Florida, on Monday, September 12th. This is your chance to make your voice heard on who deserves support from the tea party movement. The top eight Republican presidential candidates will be participating in the debate. 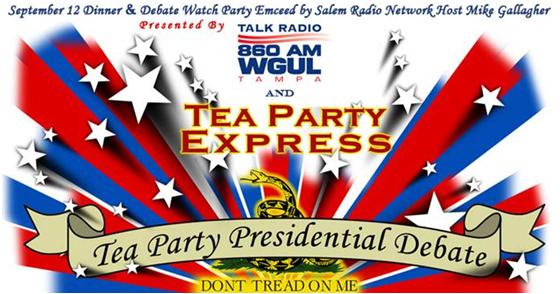 The dinner will be emceed by Salem Radio Network Host Mike Gallagher and presented by The Tea Party Express and Talk Radio 860 WGUL, be part of the festivities. The Debate Watching party will include dinner, entertainment and the chance to mingle with all of the participants at the presidential debate.

Allen West commented today on FoxNews’ “Fox & Friends,” that he is “reconsidering” his membership in the Congressional Black Caucus.

We have provided the context and some of Rep. West’s compelling reasons in the following items: