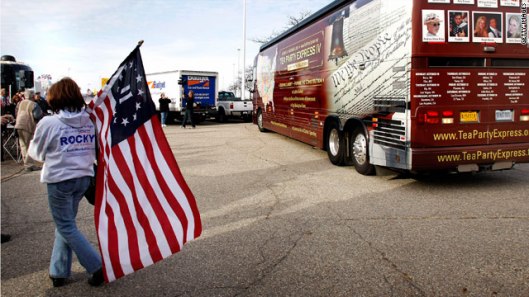 (That’s a photo of me with my hat on located at the lower left corner of the bus. I’ll be joining the TPX in Wisconsin this weekend. Watch for my real-time posted reports here, on Twitter, and at my radio show producer ThirdWaveDave’s site).

“The tea party stands for fiscal responsibility, and Republican Senators in Wisconsin stood firm for those principles,” said Amy Kremer, chair of Tea Party Express. “Now they are under attack for doing the job they were elected to do. It is critical that we support and defend them from these undeserved attacks and in that effort we are proud to be joined by our friends at Tea Party Nation.”

Sal Russo, an influential strategist and founder of the Tea Party Express, said that even the terrorist jibe was a sign of success. “When people make outrageous comments like that you know they have lost the rational debate and you are winning.” 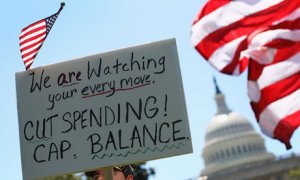 “This week the Tea Party Express — in a bit of a risky move — is bringing all of its heavy hitters to Wisconsin to support six Republican state senators who face recall elections. If Sarah Palin, Joe the Plumber, Michele Bachmann and Ann Coulter can’t save the GOP from angry voters in a crucial swing state such as Wisconsin, what motivation would traditional Republicans have to continue to listen to their demands? Everyone knows the GOP can win Alabama without the tea party’s help. What Boehner and company are trying to figure out is what they will lose without them. The recall election may provide some answers.” — CNN columnist “Wise up GOP. Ditch the Tea Party”

Once again this is a case of the liberals and media picking on everyone’s favorite scapegoat in an attempt to save face.