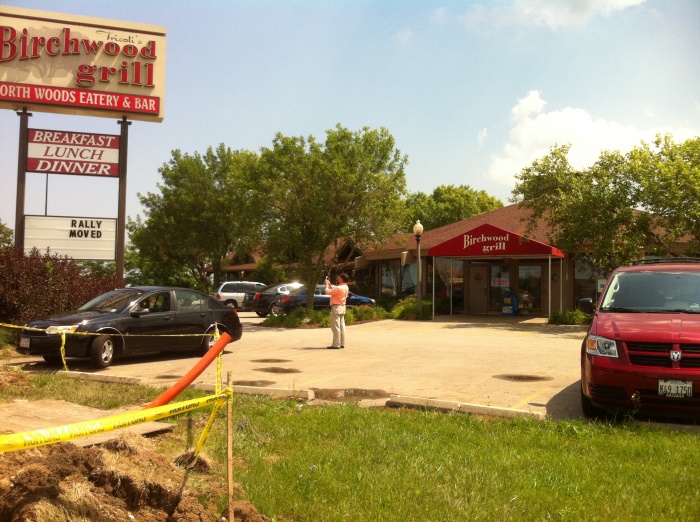 The Birchwood Grill, a well-established area favorite was reportedly concerned about potential boycotting efforts by state employee and national unions (AFSCME and AFL-CIO).

Aboard the Tea Party Express bus, the rally advance team sprang into action, securing a larger venue some 7 miles away at Lincoln Park, 6900 18th Avenue in Kenosha.

The Tea Party Express bus arrived at the restaurant, where they were met by a volunteer for the Jonathan Steitz campaign. Republican Steitz is challenging incumbent Democrat Robert Wirch in the August 16th recall. (Six Republicans are being recalled in THIS Tuesday’s recall election. Two Democrats face recall in next week’s August 16th election.) The campaign volunteer was on site to hand out flyers alerting arriving rally-goers to the change in locale.

After offering the volunteer some chilled bottled water while he stood in the heat and sun, the Tea Party Express moved on.

By now, I assume everyone who isn’t comatose has heard about the Standard & Poors downgrading of the USA’s economic stability from AAA to AA+.   Despite the White House feverishly working to spin the news for we-the-proletariat — and hinting that “it really means nothing” — I suspect there is much celebrating going on behind the scenes.  Since ratings were established, this is the first time in History that the United States of America has been downgraded.   This is unprecedented in our history.  Therefore, Obama is partying hardier than ever.  After his Chicago $35,000 per plate birthday bash extravaganza — largely on the US taxpayer — his latest fundraiser planned for next Thursday in New York is designed to bring in $71,600 per plate.  And all of this is transpiring while he is on a bus tour — we believe illegally on the US taxpayer — campaign for 2012.  Note:  As our leftist courts and supplicant US Congress support his every move, no one does anything about Obama’s increasingly criminal behaviors.

The reality is that in order to establish a Marxist-Leninist or Marxist-Mao Utopian parasitic government to destroy the middle-class (who will then in their newly-imposed slavery support the elites) the host country must be utterly destroyed.  Said country can then be rebuilt (i.e. “transformed”) into the image of “The One” or The Ones.”   In this, I suspect Obama has far exceeded his own training and his Master’s timeframe with what he has wrought upon our country… and the world.  Truly, he is the first leader (make that “non-leader”) of his type.

Obama is a destroyer par excellence and may, in the end and assuming we do not rid ourselves of him, end up surpassing even Adolph Hitler, Josef Stalin or Mao Zedong.  We know he is already brimming with pride over his accomplishments, as we see it in his growing smile — one that is beginning to oddly resemble a Narcissistic and condescending sneer as his eyes become even more sinister.

Obama has destroyed our health care system.  Obama is in the process of removing our Bill of Rights.  Obama has stolen trillions of our dollars and sent them overseas… some to locations and entities that still remain secret.  He has taken over our water and food distribution (shades of Stalin and every other despotic ruler here!).    Obama is increasingly talking publicly about “the problems of democracies.”  Obama’s Operation Gunwalker/Gunrunner — ”Fast and Furious” was specifically designed to remove legally-obtained guns from US citizens by blaming the planned murderous outcome of the program on gun shop owners and the US citizenry at large.  The Obama-Holder syndicate bosses were caught in their criminal scheme… but, they’re still continuing their plan to dissolve the Second Amendment (and therefore all) .

It has, also, now been revealed that the Obama syndicate and the Sinaloa Drug Cartel has a “business relationship.”  In return for “favors,” the Obama syndicate (aka the “US Obama Government”) allowed the drug cartel to bring tons of cocaine into the USA with encouragement and without consequences.  Note:  Remember Obama has said his favorite movie is “The Godfather” and our Southern border still remains wide open.  Still wonder why?

Now, Obama and the Marxist Democrats (remember that the Democrats took over both Houses of Congress in January 2007) have destroyed the economy… yet, they are still demanding we give them more!  Nothing ever satisfies the corrupt and perverse.  For the tyrannical ruler, there is never enough.  There may not be enough for those who continue to demand they be allowed to suckle even when all the milk has been consumed.  But, have you finally and decisively had enough from the Obama syndicate and those who support and collaborate with it?  Have you?  Isn’t it time that we now begin to demand ever-more-loudly resignations — or prison time — from the parasites who continue to feed off of us?  Isn’t it?
—–

“Woe to those who make unjust laws, to those who issue oppressive decrees, to deprive the poor of their rights and withhold justice from the oppressed of my people, making widows their prey and robbing the fatherless.” – Isaiah 10:1-2

“If money is wanted by Rulers who have in any manner oppressed the People, they may retain it until their grievances are redressed, and thus peaceably procure relief, without trusting to despised petitions or disturbing the public tranquility.” – Journals of the Continental Congress, 1:105-113

“If you will not fight for the right when you can easily win without bloodshed, if you will not fight when victory will be sure and not so costly, you may come to the moment when you will have to fight with all the odds against you and only a precarious chance of survival. There may be a worse case. You may have to fight when there is no chance of victory, because it is better to perish than to live as slaves.” – Winston Churchill
—–

Stacked Courts and Dissolution of US Laws set to officially establish the Obama Tyranny:
at canadafreepress.com

I cannot express the level of horror and sadness we feel over this event that took the lives of 31 of our bravest. Today we mourn and feel a sense of overpowering loss. May God be with their families – I know each of them has a special place in heaven. May those who did this meet a just and swift fate. These animals should rot in Hell for this.

I can’t help but ask how the enemy found out that SEAL Team Six was on that helicopter? And why altogether in one chopper? I’m not sure how many members are in the Naval Special Warfare Development Group, but this is a tremendous loss. I hope the SEALs will get to the bottom of this quickly – if anyone can, I know it is them.

According to sources, the team was thought to include 22 SEALs, three Air Force air controllers, seven Afghan Army troops, a dog and his handler and a civilian interpreter, plus the helicopter crew.

A helicopter crash in Afghanistan killed 31 Americans, including as many as 25 Navy SEALs in one of the worst single-day U.S. losses of life since the war began, a senior military official told ABC News early this morning.

A total of 38 people were on board the Chinook helicopter when it crashed overnight in the eastern Afghan province of Wardak.

Initial reports indicate up to 25 Navy SEALs were on the aircraft at the time.
It was also carrying seven Afghan Special Forces troops, one interpreter, five member helicopter crew and one dog.

Troops were apparently involved in a raid at the time.

BILL MAHER, HOST: So, excuse my language, but we used to do a segment on this show called “How F—ked Are We?”

MAHER: …This, just before we went on the air they said our rating got downgraded.

ROMER: I’ve been hanging around Tim Geithner too long.

A timely reminder from Kim Priestap – Hannan might as well have been addressing Congress. In fact, we are in far worse condition here in the States.