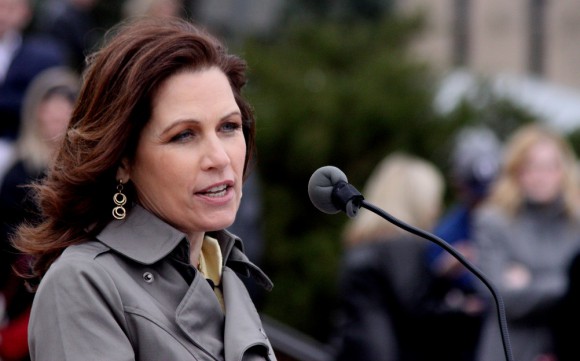 If liberal New York Times columnist Joe Nocera can apologize for comparing Tea Party activists to terrorists, then The Washington Post can and should apologize for pretending that Nicolle Wallace is someone who should be taken seriously by Republicans. The Post ran a Wallace article on Sunday claiming that Michele Bachmann is too conservative to be president, in part because of her association with the Tea Party.

Wallace was headlined as the “former Bush aide” and adviser to the McCain-Palin campaign. The article was the lead in the popular Post Sunday “Outlook” section of opinion.

Bachman, wrote Wallace, “holds views that are outside the political mainstream and is unlikely to emerge as her party’s nominee—and even less likely to beat Obama.” This comes near the end of a column that pretends to be pro-Bachmann by noting that she is running a good campaign.

Coming just days before the Iowa straw poll and Republican presidential debate, this was the Post’s way of warning Republicans who embrace Bachmann that she will be an ultimate loser and should therefore be shunned.

But Wallace is a notorious Sarah Palin-basher who objects to conservative social and economic views. Wallace calls Palin “prickly” and “cynical” and someone to be “exposed.”

In fact, Wallace worked, as a campaign insider, to sabotage Palin during the 2008 campaign. The story was told in Palin’s book about the campaign, Going Rogue, where Wallace is depicted as someone determined to get her on the CBS Evening News with Katie Couric so that she could be sandbagged by the left-wing anchorwoman. Wallace had worked for CBS.

Wallace surfaced last year as a sponsor of a fundraiser for a pro-homosexual group called American Foundation for Equal Rights.

Wallace uses her “Republican” credentials to bash conservative Republicans, especially if they are conservative women who hold traditional views of marriage and the family.

In regard to Bachmann’s economic positions, Wallace writes, apparently with alarm, that, “She formed the Tea Party Caucus, opposed the bailout and stimulus bills, and is leading the effort to repeal President Obama’s health-care reforms.”

What’s more, Wallace writes of Bachmann, “She was one of the first Republican presidential candidates to voice her opposition to raising the debt ceiling and was one of nine Republicans who voted against the House GOP’s ‘cut, cap and balance’ bill because it did not go far enough. She voted no on the final debt-ceiling compromise, and unlike some of her competitors for the nomination, she communicated her objections consistently and loudly throughout the debate.”

What Wallace is doing is making a principled conservative sound or look extreme, in order to make Republican voters in Iowa and elsewhere believe that she is unelectable. But the facts are not in the article to support the thesis.

The headline over the print version of the article was, “How Bachmann is outrunning Palin—and Hillary.” The on-line version carried the headline, “What Michele Bachmann learned from Sarah Palin—and Hillary Clinton.” Both headlines seemed complimentary of Bachmann. It is the hook that is supposed to draw readers to the article and conclude that while Bachmann has run a good campaign, she cannot win because she is too extreme.

The Palin book is important in setting the record straight about Wallace and other McCain advisers. As we noted in a previous column, Palin reveals in her book that during the 2008 campaign she discussed homosexual issues with the McCain advisers and made it clear that she opposed gay marriage. After McCain went down to defeat, McCain senior campaign adviser Steve Schmidt gave a speech to the Log Cabin Republicans, a homosexual group, endorsing gay marriage.

And this seems to be why Wallace, a gay rights supporter, is determined to undercut Bachmann’s successful campaign.

Getting to the nub of the matter, Wallace later writes that Bachmann’s husband’s counseling practice “was found to have offered treatment to gay individuals that included prayer to ‘cure’ homosexuality” and that “Bachmann’s poll numbers rose steadily amid the media scrutiny of Marcus Bachmann’s professional offerings and outrage from across the political spectrum.”

Except for the reference to Bachmann continuing to enjoy rising support despite the “media scrutiny,” this is complete nonsense. The attack on Marcus Bachmann originated with a gay rights group that used a major media reporter, ABC’s Brian Ross, to attack the documented record of firms such as Bachmann’s in counseling individuals to reject homosexuality within a religious context. This approach is used for homosexual-oriented individuals seeking to change. And many have done so, as the thousands of ex-homosexuals attest.

It is a variation of the same spiritual approach used to help people reject drugs or alcohol.

Wallace’s bio says that she lives in New York City and Connecticut with her husband, Mark, a former Ambassador to the United Nations, and their dog. While she has appeared on some Fox News programs, she seems more at home on Rachel Maddow’s MSNBC show, where Maddow is always eager to bash conservatives and to divide the Republican ranks.

Indeed, one of Wallace’s appearances on the Maddow show is highlighted on Wallace’s home page. This tells us all that we need to know.