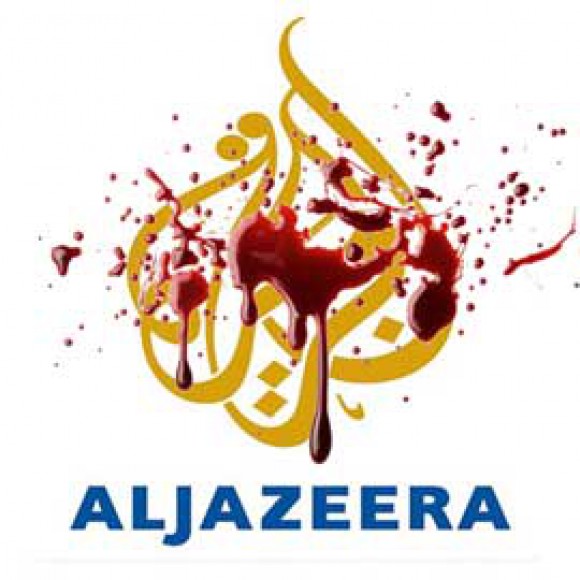 Michael Calderone, the senior media reporter for The Huffington Post, has written an article which appears on the website of Arab American News that appears to “credit” Senator John McCain for helping get carriage for Al-Jazeera English (AJE) on Time Warner cable in New York.

He writes that “…U.S. political leaders have had far more praise for the network’s on-the-ground reporting around the globe. In March, Secretary of State Hillary Clinton called AJE ‘real news’ for its coverage of the Arab Spring protests. Two months later, both House Minority Leader Nancy Pelosi (D-Calif.) and Sen. John McCain (R-Ariz.) attended a dinner for the network and spoke glowingly about its impact on the revolutions sweeping the Middle East and North Africa.”

Meantime, an Al-Jazeera contributor, Republican David Ramadan, who supported McCain for president, is running for the newly created 87th House of Delegates seat in the Commonwealth of Virginia and seems poised to win. He has been interviewed by Al-Jazeera, which the Muslim Brotherhood describes as the “great Arab media organization,” and says that his mission includes “educating the Republican party on the Arab-American and Muslim community on what we need from candidates in order to support them.”

The Huffington Post has done its part on behalf of Al-Jazeera, as noted by the Committee for Accuracy in Middle East Reporting in America (CAMERA): “Another facet of the Huffington Post’s brand of journalism is its symbiotic relationship with Qatar’s state-financed news organization Al Jazeera. In early 2011, the Huffington Post ran a series of pieces supporting Al Jazeera’s efforts to convince major American cable companies to carry its newscasts.

“From Jan. 30 to 31 alone, Huffington Post published four pieces promoting Al Jazeera, including one by Jeff Jarvis titled ‘We Want our Al Jazeera English Now’ which calls the decision not to carry Al Jazeera ‘un-American.’

“Another piece by Wadah Khanfar, the Director General of Al Jazeera, was a full page promotional piece for the network, citing its ‘Journalism of depth.’

“Khanfar has become something of a regular contributor to the Huffington Post, creating the unusual circumstance where the head of a foreign-based media source owned by an autocratic head of state serves as a guest columnist for a major American news organization.”

Calderone is nevertheless correct in his assessment of how significant McCain’s praise of the channel has been. As we noted at the time, McCain’s praise of the terror channel “was a shocker because the day before, on Sunday, The Washington Post had finally gotten around to publishing a semi-critical article on the channel, noting its double-standards and open bias on the matter of revolutions in the Middle East. The Post even acknowledged that WikiLeaks had released a U.S. cable describing the channel as a foreign policy instrument of Qatar, the Middle Eastern dictatorship which financially sponsors it and selects its personnel.”

Picking up a New York Times story by Brian Stelter about Al-Jazeera getting carriage in New York, Keach Hagey of Politico wrote, “It’s a major step forward for the awareness-raising campaign that AJE has been on since its coverage of the Arab Spring propelled it to newfound relevance this year. But so far there is no sign that the obstacles keeping the channel from achieving its true goal in the U.S.—national cable carriage—are cracking at all.”

Neither Stelter nor Hagey gave any space to critics of Al-Jazeera, an indication of how this “awareness-raising campaign” has captured the exclusive attention of these reporters, indicating that they do not want to be accused of putting obstacles in the way of its well-financed push for carriage in major U.S. media markets.

One of the big obstacles has been the channel’s anti-American and anti-Israel bias.

Interestingly, many of the concerns that we have expressed about Al-Jazeera are confirmed in a 94-page master’s thesis, “Al-Jazeera as a Political Tool within the Contradictions of Qatar,” by an Arabic-speaking Japanese graduate, Munehiro Anzawa, available on the American University in Cairo website. It is dated May 2011.

This student is able to document many of the facts that seem to have been ignored by the media cheerleaders for the channel. First—and most obvious—the channel is Arab government-funded, which obviously colors its reporting.

The student writes that “It is important to reveal how Al Jazeera’s financing by one of the most repressive governments regarding freedom of expression affects the channel’s coverage, bias, and editorial independence. It is also interesting to note that Al Jazeera’s news reporting virtually ignores the internal affairs of its financial sponsor, Qatar, or the ruling Al Thani family.”

“More significantly,” says the master’s thesis, “Al Jazeera does not seem eager to report on the internal issues of Qatar and the dirty laundry of the ruling family.”

Other important points on the subject of dirty laundry:

The academic study, however, neglects many other important points, including the fact that Al-Jazeera’s Afghan correspondent, Tayseer Alouni, went to prison in Spain for being an agent of al-Qaeda. This kind of relationship explains why Al-Jazeera has been so quick to air exclusive videos and messages from Al-Qaeda and other terrorist groups.

The study notes that a turning point for Al-Jazeera in the U.S. came when U.S. Secretary of State Hillary Clinton praised the channel for offering “real news.” The study failed to note that her husband, disgraced former president Bill Clinton, has a financial relationship with the government of Qatar and several entities in the country. The regime is a financial sponsor, listed at between $1 and $5 million, of the William J. Clinton Foundation.

In mid-May it was revealed by Hagey at Politico that McCain had praised Al-Jazeera, becoming a shill for the terror channel. It appears that McCain was using the channel, or perhaps the channel was using him, in order to affect regime change in Libya. As a result, Islamists are poised to take control of the country.

We pointed out at the time, “McCain’s praise of Al-Jazeera was also curious because the channel, during the 2008 presidential campaign, had savaged the McCain-Palin ticket by running a piece depicting Republican voters as country bumpkins and racists. Casey Kaufmann, the Al-Jazeera reporter who did the story, contributed $500 to the Obama-for-president campaign, a violation of basic standards of journalism ethics.”

Additional research has turned up the fact that David Ramadan, a member of the Virginia delegation and Arab-American delegate to the Republican National Convention in 2008, told Al-Jazeera about his support for McCain in an article that appeared under the direct headline, “Why I support John McCain.” He wrote, “McCain is a reformer, McCain is pro-immigration, McCain is a centrist. McCain supports the US finishing the trouble that George Bush got the US into in Iraq.”

Ramadan is running for the newly created 87th House of Delegates seat in the Commonwealth of Virginia and the Republican primary election takes place on August 23. His website boasts an endorsement from House Majority Leader Rep. Eric Cantor, a Jewish conservative, and other prominent Republicans. Appointed by Governor Robert McDonnell to serve on the Board of Visitors of George Mason University (GMU), he says he is an example of living the American dream. He has lived in Virginia since 1989.

However, Ramadan’s bio also says that he is a “frequent commentator” on networks such as Al-Jazeera.