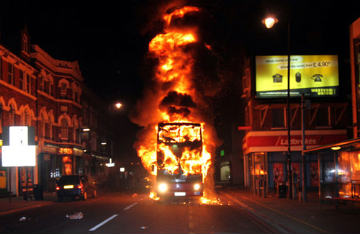 Watching London burn, one cannot help but sense something has gone awry in the west. London, the cradle of our law, spins toward lawlessness.

The law, the steady framework of our civilization, seems incapable of response. Americans don’t have the luxury anymore of watching the anarchy on television, assuming distance insulates us from the Mob-prowling neighborhoods like Camberwell and Tottenham. The howling rage has even come to our own Midwest.

Hopefully time and wisdom will reveal what has fractured, but for now, we are certain of some things.

We know that the House of Reeves in Croydon, South London, is a pile of ash and rubble. This furniture business had been in the Reeves family for 141 years, surviving even Hitler’s blitz. But the Mob burned it down. “I’m the fifth generation to run this place,” said owner Graham Reeves, “I have two daughters. They would have been the sixth.” It was a fixture in Croydon, which may have been its doom. The Mob loves to devour the fixtures of civilization. The Mob also delights in the destruction of a father’s dream for his daughter. We’ll return shortly to why this may be.

We know that the Mob is forcing victims to undress, to turn over family heirlooms such as wedding rings. We know the weapon of choice for this British Mob is fire.

We now sense that the British government is hopeless. A government that as recently as 1970 made “arson in a royal dockyard” a hanging offense dithers over whether to employ water cannons against the Mob. Americans who, for generations endearingly considered England a model of civility and decorum, know something must have failed catastrophically, but what?

We also now know the Mob has visited America in recent days and years.