By: TE
From: Knowledge Creates Power

Obama’s Big Job’s Bus Tour… 3-days ending in Chicago and then back to Washington D.C. and off to Martha’s Vineyard… 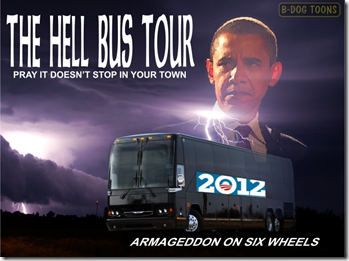 Under green trees in a peaceful setting with a river flowing in the background, President Obama made his first address to rural America on Monday, August 15, in Cannon Falls, Minnesota. The event appeared to be perfectly staged as he chastised the “other side” for “political problems”, not “government problems” in Congress. After his address, ten questions asked by loyal Obama supporters fed the fuel for the man in the white shirt with kaki colored pants taking credit for everything good and accepting none of the blame for anything bad.

All of this was, of course, done under the pretext of not campaigning for the 2012 election. This may have seemed somewhat believable, until toward the end of the questioning one man praised Obama and said: “I don’t think we should solve this debt crisis on the backs of the middle class and poor. We should have the millionaires and billionaires to do this. I campaigned and voted for you in 2008 and I will do the same in 2012.”

Many rural listeners of RFD TV tuning in to hear the special televised program that had preempted the regular programming of the Julie Goodnight, Aaron Raslton, and Craig Cameron horse shows may have been disappointed because the president did not directly speak about Executive Order 13575 that he signed on June 9 designed to begin taking control of over almost all aspects of the lives of the 16% of our population that live in rural areas.

The address mainly consisted of praise from Obama by the hand selected questioners and a rehash of how $5 Billion in assistance to small and medium size farmers had been used to continue programs for: expanding broadband service, biofuels, green energy, and job creation. 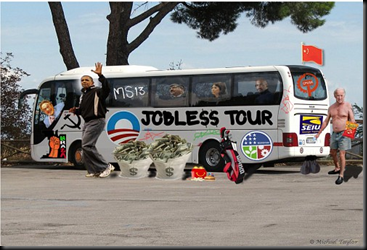 He began his speech by offering excuses for a bad economy. Blaming the Arab Spring and Japanese Tsunami, he said these things are not in our control, but the political climate is. He urged people to contact their representatives. He said “We now have a political culture that doesn’t want to move America forward, but want to place the burden on future generations… The debt ceiling is a self-inflicted wound and had his plan been put forth to fix the situation, the other side would rather see their opponents lose than have America win.” He warned: “We cannot have patience with that kind of behavior anymore.”

His five-step plan that he is hoping Congress will implement includes:

1. Renewing the payroll tax credit which, according to Obama, “would put $1000 in your pocket”.

3. Corporations would be given tax credits for hiring veterans

4. Expanded trade deals to ship “Made in America” goods such as cars to other countries

5. Encourage entrepreneurs by investing in their ideas

Pushing the philosophy for “Taxing the Rich”, he said that Warren Buffet had told him, “We got to stop coddling billionaires like me” (…after which Buffet admitted he had cheated on his taxes). Obama wants more spending for investments in education, research, and infrastructure, but also believes we need to cut back on programs that don’t work. He compared the answer to our deficit problem as “much like running his own household, where if he told Michelle that she had to cut back on her spending, but he would keep his golf clubs… wouldn’t work.”

By the way, if an average were taken, Michelle Obama has taken one out of every nine days since they’ve been in the White House for vacation and Obama has golfed nearly every weekend.

Following the Cannon Falls event, the President will host a town hall event in Decorah, Iowa at Seed Savers Exchange. Tuesday, August 16th, he will travel to Peosta, IA for a Rural Economic Forum at Northeast Iowa Community College. The economic bus tour will also feature events in Atkinson and Alpha, Illinois on Wednesday, August 17 before the President returns to Washington.

Maybe at one of these events he will begin to clue us in on his Executive Order for Rural America which has undertones of a UN take over of our nation’s Heartland.