This should be illegal. It is filled with lies. MSNBC’s Chris Matthews just had two people on his Hardball show — David Campbell of Notre Dame University, spouting so-called “facts” from a “study” he did about the make-up of the Tea Party movement, and Joan Walsh of Salon.com who was swearing to his lies. Shocking. Just a shocking example of Saul Alinsky tactics, using twisted lies to denigrate those in the tea party movement and GOP front runner Rick Perry. A two-fer. Or maybe a three-fer, if you consider that any independents who were watching probably decided then and there who they will not be voting for.

The focus was on racism — trying to sell viewers on the lie that tea partiers are “not comfortable with minorities” and are “churchies“, a name for those who they say really like having the church involved in politics. No, really. They said that.

We noted that they didn’t have Thomas Sowell, or Lloyd Marcus, or Kevin Jackson on to refute and dispute the “so-called ” facts.

Joan Walsh: “Its the republican base dressed up in funny costumes… the role of right wing media — Rush and Savage — that’s made it more theatrical… but its not any different from what we’ve been seeing for past 50 years… overwhelmingly white, low regard for immigrants and blacks before Obama was president.

Joan Walsh: That’s not terribly surprising, not only about having a black president and we’ve seen horrible incidences of racism since this man has been president.

Chris Matthews: Among tea party supporters, 76% said laws and policies would be better if leaders were deeply religious.

David Campbell: Tea partiers are concerned about size of government and other positions you’d expect them to have… real big interplay with God in government. That’s why you’d expect Bachmann or Perry to have traction with this group.

Chris Matthews: Largely christian conservative, fight same sex, against abortion… there’s a strong evangelical protestant culture in this country… the notion that you have to be a white protestant to embody the values of America… Rick Perry is Bull Connor… Perry using word secession, states rights — it’s code — is it wrong to suspect he might have these views?

David Campbell: Data suggests those are phrases and issues that will resonate — he’s so open and overt with his religion.”

This is pure Saul Alinsky…. they’re setting the table…

The campaign has begun in earnest. They’re playing “hardball”. They. Must. Destroy. Tea party.

GIVEN how much sway the Tea Party has among Republicans in Congress and those seeking the Republican presidential nomination, one might think the Tea Party is redefining mainstream American politics.

But in fact the Tea Party is increasingly swimming against the tide of public opinion: among most Americans, even before the furor over the debt limit, its brand was becoming toxic. To embrace the Tea Party carries great political risk for Republicans, but perhaps not for the reason you might think.

Polls show that disapproval of the Tea Party is climbing. In April 2010, a New York Times/CBS News survey found that 18 percent of Americans had an unfavorable opinion of it, 21 percent had a favorable opinion and 46 percent had not heard enough. Now, 14 months later, Tea Party supporters have slipped to 20 percent, while their opponents have more than doubled, to 40 percent.

Of course, politicians of all stripes are not faring well among the public these days. But in data we have recently collected, the Tea Party ranks lower than any of the 23 other groups we asked about — lower than both Republicans and Democrats. It is even less popular than much maligned groups like “atheists” and “Muslims.” Interestingly, one group that approaches it in unpopularity is the Christian Right.

The strange thing is that over the last five years, Americans have moved in an economically conservative direction: they are more likely to favor smaller government, to oppose redistribution of income and to favor private charities over government to aid the poor. While none of these opinions are held by a majority of Americans, the trends would seem to favor the Tea Party. So why are its negatives so high? To find out, we need to examine what kinds of people actually support it.

Beginning in 2006 we interviewed a representative sample of 3,000 Americans as part of our continuing research into national political attitudes, and we returned to interview many of the same people again this summer. As a result, we can look at what people told us, long before there was a Tea Party, to predict who would become a Tea Party supporter five years later. We can also account for multiple influences simultaneously — isolating the impact of one factor while holding others constant.

Our analysis casts doubt on the Tea Party’s “origin story.” Early on, Tea Partiers were often described as nonpartisan political neophytes. Actually, the Tea Party’s supporters today were highly partisan Republicans long before the Tea Party was born, and were more likely than others to have contacted government officials. In fact, past Republican affiliation is the single strongest predictor of Tea Party support today.

What’s more, contrary to some accounts, the Tea Party is not a creature of the Great Recession. Many Americans have suffered in the last four years, but they are no more likely than anyone else to support the Tea Party. And while the public image of the Tea Party focuses on a desire to shrink government, concern over big government is hardly the only or even the most important predictor of Tea Party support among voters.

So what do Tea Partiers have in common? They are overwhelmingly white, but even compared to other white Republicans, they had a low regard for immigrants and blacks long before Barack Obama was president, and they still do.

More important, they were disproportionately social conservatives in 2006 — opposing abortion, for example — and still are today. Next to being a Republican, the strongest predictor of being a Tea Party supporter today was a desire, back in 2006, to see religion play a prominent role in politics. And Tea Partiers continue to hold these views: they seek “deeply religious” elected officials, approve of religious leaders’ engaging in politics and want religion brought into political debates. The Tea Party’s generals may say their overriding concern is a smaller government, but not their rank and file, who are more concerned about putting God in government.

This inclination among the Tea Party faithful to mix religion and politics explains their support for Representative Michele Bachmann of Minnesota and Gov. Rick Perry of Texas. Their appeal to Tea Partiers lies less in what they say about the budget or taxes, and more in their overt use of religious language and imagery, including Mrs. Bachmann’s lengthy prayers at campaign stops and Mr. Perry’s prayer rally in Houston.

Yet it is precisely this infusion of religion into politics that most Americans increasingly oppose. While over the last five years Americans have become slightly more conservative economically, they have swung even further in opposition to mingling religion and politics. It thus makes sense that the Tea Party ranks alongside the Christian Right in unpopularity.

On everything but the size of government, Tea Party supporters are increasingly out of step with most Americans, even many Republicans. Indeed, at the opposite end of the ideological spectrum, today’s Tea Party parallels the anti-Vietnam War movement which rallied behind George S. McGovern in 1972. The McGovernite activists brought energy, but also stridency, to the Democratic Party — repelling moderate voters and damaging the Democratic brand for a generation. By embracing the Tea Party, Republicans risk repeating history.

David E. Campbell, an associate professor of political science at Notre Dame, and Robert D. Putnam, a professor of public policy at Harvard, are the authors of “American Grace: How Religion Divides and Unites Us.”

Also, read Deanna Murray’s piece at Big Government: Submissive Wife Not What Left Thinks It Is.

Energy in America: Keystone XL’s Oil Sands Pipeline Up in the Air 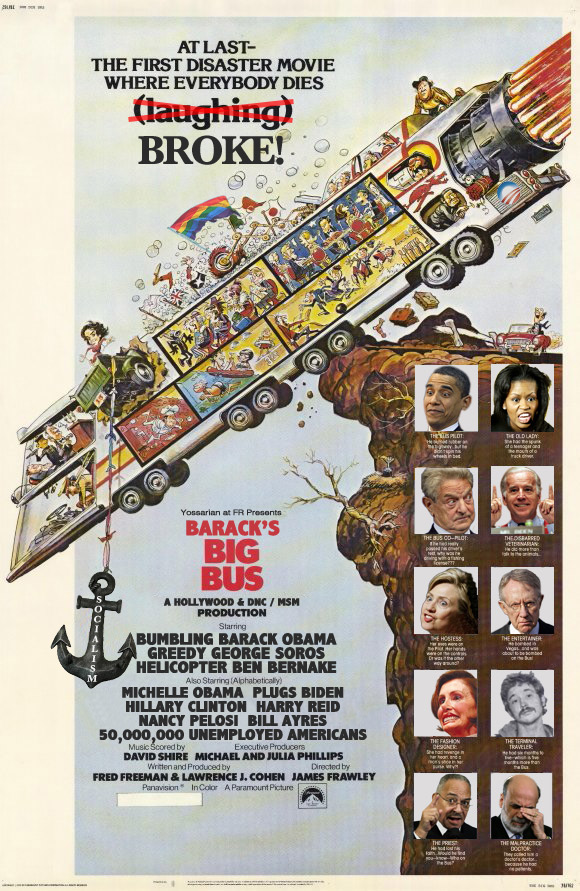 New Low of 26% Approve of Obama on the Economy

During a town hall meeting at Wyffels Hybrids in Atkinson, Illinois, a farmer expressed concern to President Obama about forthcoming regulations. The man stated that people would rather be farming than “filling out forms and permits to do what we like to do.” President Obama told the farmer “don’t always believe what you hear” and blamed Washington for ginning up speculation. Obama added that, “Nobody is more interested in seeing our agricultural sector successful than I am, partly because I come from a farm state.”

OBAMA: One of the challenges in terms of rebuilding our economy is – businesses have gotten so efficient, that, uh, when was the last time somebody went to a bank teller? Instead of using an ATM. Or, used a travel agent instead of going online. A lot of jobs out that that used to require people now have become automated.

The Grio: Sparks flew Tuesday during the Congressional Black Caucus “For the People Jobs Tour” town hall in Detroit, MI, as black caucus members told the mostly black audience to “unleash” them to confront President Barack Obama on the issue of jobs. During the sometimes heated town hall, peoples’ frustration over their economic conditions overwhelmed decorum and order.