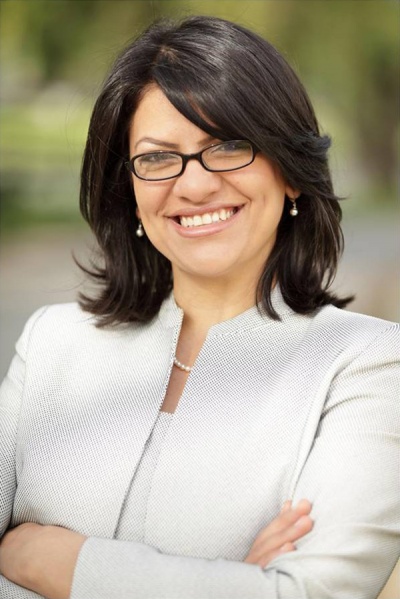 Rashida Tlaib has been a Democratic State Representative, representing the 12th District of Michigan since 2009. Prior to entering her political career, she worked for Latin Americans for Social and Economic Development, the Arab Community Center for Economic and Social Services and then at the office of the Maurice & Jane Sugar Law Center-affiliated State Representative, Steve Tobocman in 2004. When Tobocman became Majority Floor Leader in 2007, he recruited Tlaib to be on his staff. In 2008 he convinced Tlaib to run for his seat, which he would be vacating due to term limits. Tlaib was subsequently elected as State Representative for the 12th District of Michigan. Also that year Tlaib worked as the Arab-American outreach coordinator for Barack Obama’s Michigan campaign. Then in 2009 she was was one of more than 1,000 state legislators to sign a letter entitled “State Legislators for Progressive Health Care Reform.” The letter was a project of the Progressive States Network with assistance from AFL-CIO, AFSCME and SEIU. In 2010, she shared a stage with Obama’s former “Green Jobs Czar,” Van Jones at the 4th annual Michigan Summit.

In October 2010, Tlaib was a signatory to a letter in support of 14 activists from Illinois/Minnesota who were targeted in the September 24, 2010 FBI Raids. The activists were primarily connected to the Freedom Road Socialist Organization/FightBack! and were accused of supporting terrorist groups in the Middle East and Latin America. Tlaib has received a “political leaders fellowship” from the leftist Center for Progressive Leadership. In 2010 People For the American Way supported her. Tlaib currently serves on the Board of Directors for the Maurice & Jane Sugar Law Center.