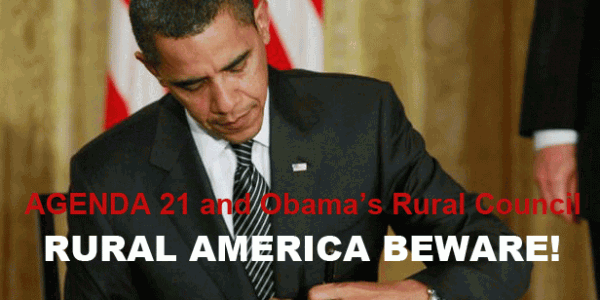 Give him an inch and he’ll take a mile… 95% of America’s land area to be exact – rural America.

You might be thinking this doesn’t affect you because you don’t live in ‘rural America,’ but think again because the agenda in play is to eliminate all property rights in the U.S.

The first order of business is to drive out the 16% of our population who currently live and work in rural America. The final steps to implement the “Agenda for the 21st Century” have begun.

Decades in the making (long before Obama became President), the framework was slowly integrated into the U.S. all the way down to the local level in the form of environmental programs (e.g. Sustainable Development, Smart Growth). With Obama in office, the race to the finish line has begun with a President whose stated goal is “fundamentally transforming the United States of America.”

Obama’s administration has initiated the final phase through Executive Order (EO) 13575 and new oppressive regulations. Here’s a taste of the first steps of Obama’s takeover…

FOOD: Family farms are facing an all-out assault on their very existence by Obama’s administration. From his Federal Motor Carrier Safety Administration (FMCSA) proposing to regulate agricultural vehicles as Commercial Motor Vehicles (CMVs), to armed raids at raw food stores, to regulating vendors at Farmers Markets, there’s a war being waged against those who produce and provide food for the people of our country. What the FMCSA is trying to do will end family farms in our country whose children contribute to planting and harvesting their crops; their children would not be able to operate agricultural vehicles if classified as CMVs. Although the FMCSA is backing off due to pressure from the public and from Senators, they’ll try again when they think we’re not paying attention.

WATER: We all remember that the government denied water to the farms in California’s Central Valley which utterly destroyed the crops and the families who lived there. Government control and manipulation of our water supply is hitting farms with a vengeance and it doesn’t stop there… it extends to our cities, as reported by Janet C. Phelan in her article, “Homeward Bound – Water As A Weapon.”

“At the same time that the economic realities are keeping us close to home, the government is amassing campaigns, in cities across the country, to get us back on tap water and off bottled water.

The proponents of tap cite a number of reasons that they prefer tap to bottled – drinking bottled water contributes to the emission of greenhouse gases (because the water has to be transported); the increasing amount of plastic bottles in landfills; the sapping of aquifers by bottled; and that selling water guts efforts to make safe drinking water a basic human right. There is increasing concern that chemicals leaching from plastic bottles into the contained water may, in fact, be carcinogenic. Numerous reports recently peppered the main stream press alluding to high bacteria levels in bottled water and a low fluoride level in bottled water.”

Through FOIA requests and relentless investigative reporting, Ms. Phelan discovered multiple, parallel water-pipes in Medford, Oregon. When she tried to determine why there was a second water pipeline and what it could possibly be used for, she was met with denials and lies. What she did discover was this (think ‘Michael Chertoff – former DHS Chief – who is also connected to the company that manufactures the naked body scanners used in our airports’)…

“Other indications point to a cover up concerning water pipes. Larry Chertoff, who is one of the top water guys in the country, was interviewed by this reporter and vehemently denied that the double water line system exists. When emailed the Spokane blueprints attached to this story, he declined further comment. Larry Chertoff, by the way, is the “secret cousin” of former Department of Homeland Security chief Michael Chertoff. Larry Chertoff is currently a director of Alinda Capital Partners LLC, the largest independent infrastructure private equity fund, and has had more than 30 years experience in the public and private sector working on water projects. He was chief economist for New York City’s Environmental Protection Administration. He was also the US correspondent to Global Water Intelligence, as well as an advisor to the NYC Comptroller on watershed protection issues. He is a founding Board member of the Environmental Action Coalition, Water Industry Council and Water Institute of the National Council for Public Private partnering and a member of the National Research Council’s Water and Technology Board Committee of Privatization of Water Services in the United States.”

“We call Larry a “secret” cousin, for he vigorously denies a familial relationship with DHS Michael Chertoff, although Larry’s ex-wife has copped to the fact that they are, indeed, cousins. Michael Chertoff was a co-author of the U.S. Patriot Act, which has legalized the use of poisons and delivery systems, in the infamous Section 817.”

LAND: When our government mentions “conservation,” “wetlands,” “wildlife” and “sustainable,” what they mean is they are taking possession and control of the land and the American people will not be allowed to inhabit those areas. Here’s an excerpt from Obama’s White House Rural Council Report:

“The Administration has made significant investments in expanding outdoor opportunities to create sustained economic growth in rural America, including enrolling 7.1 million acres in the Conservation Reserve Program, which retires environmentally sensitive farm lands and has set aside 300,000 acres in the program specifically to benefit game species; partnering military with state and local governments, land trusts, and landowners to secure conservation easements through the Readiness and Environmental Protection Initiative (REPI) which protects more than 170,000 acres; removing 86,927 tons of biomass from our National Forests to produce energy; and working with farmers to restore wetlands habitat on 470,000 acres in the Gulf coastal plain following the Deepwater Horizon oil spill in order to conserve migratory waterfowl.”

“The Landscape Stewards program, a partnership with the National Fish and Wildlife Foundation, will leverage up to $200,000 to support coalition-based conservation efforts beginning next year, with each grant matched by equal contributions from the coalition partners – part of President Obama’s America’s Great Outdoors initiative.”

Also, we must not forget that when the government decided to blow up the Birds Point levee and flood people out of their houses and farms, Obama’s Federal government offered to buy their land… and George Soros was buying up the flooded farms too.

The Obama administration has been working hand-in-glove with the United Nations (UN) to end property rights in America and transition to Global Governance. Once achieved, the citizens of this country will become slaves to the colonial rulers – the globalists who will institute a world-wide Socialist economy under Communist/Totalitarian rule. If you still question whether this is really happening, then define “Global Governance.” What do you think it means?

“In a simple and broad-based definition of world governance, the term is used to designate all regulations intended to organize human societies on a global scale.” (Emphasis added.)

If we still doubt what Obama and his administration is doing, all we need to do is listen to what they say and look at what they do.

“The agreement we are announcing today represents an exciting partnership between USDA and EPA that will greatly enhance our investments in water systems and also develop a skilled workforce to oversee them,” said USDA Rural Utilities Service Administrator Jonathan Adelstein.”

What the government is saying here is that they will be taking over enormous areas of land in five states (for starters – and in addition to all the land they’ve already taken from the American people) to create “biofuel” farms. Say goodbye to farms that were providing food for the people of this country and say goodbye to private property owners in the areas the government is taking over.

Don’t be fooled by their claim that what they’re doing will create jobs and strengthen the middle class. Obama has been using that lie for the past 2 ½ years to push his agenda through and weaken the middle class, thinking that Americans are too stupid to realize what’s really going on. Obamacare was advertised as a job creator; where are the jobs? The trillion dollar stimulus was supposed to create jobs; where are they? And the list goes on.

Fool me once, shame on you; fool me twice, shame on me. So whenever you hear Obama claim that his programs will create jobs or strengthen the middle class, know that he uses this lie to mask his takeover which is actually designed to eliminate the middle class and destroy liberty and freedom in this country.

That’s what Obama means by “fundamentally transforming the United States of America.”

Land, food and water… make no mistake – the government is taking those things away from the American people. Based on their performance to date, we know that the purpose of the takeover is NOT to benefit the citizens of this country. It is to fulfill their “Agenda for the 21st Century” of ending private property rights, destroying our country and placing it under Totalitarian government rule which, throughout history, has always led to unspeakable poverty, starvation and enslavement of the citizens.

Just ask yourself, “Why is Obama putting programs in place that take control of our land, food and water and displaces the people who currently own property in those areas?”… and “Why is Obama eliminating food crops to create non-food crops… will that maintain America’s food supply or decrease it?”