I met Christine O’Donnell last fall when I was traveling with the Tea Party Express. We had a scheduled rally in Wilmington, DE, and Christine was our highlighted speaker for the event.

It was a bright, cold day in late October (Halloween day), and as I hung out with radio host Tammy Bruce, 9-11 film maker Jeff Bruzzo, Tea Party Papers author Bill Miller, singer/songwriter and author Lloyd Marcus, US Navy SEAL Ben Smith and many others who were there behind the bus that formed the backdrop for the stage (that bus made for great visuals), we awaited her arrival. (Tammy literally took the coat off her back so I could wear it against the chill. Thank you Tammy.)

Security was very tight. O’Donnell had been subjected to threats throughout her US Senate campaign , so she was being escorted by a protection agency hired to keep her safe.

Finally a couple of SUVs with darkly tinted windows pulled in. It was only after the vehicles had been repositioned facing toward the street (a standard security procedure that we saw when Sarah Palin joined us in Boston) that Christine emerged, smiling and chipper.

She was escorted to the stage where she spoke for a while about her candidacy and the need to change the way business was being conducted in Washington. The crowd loved her. And then just as soon as she was done, the security team whisked her back into the black van, and away she went.

I remember thinking “is this worth it?” Her personal safety was on the line for daring to take on the establishment and speak the truth. Is this America?

Christine subsequently went on to beat long-term incumbent RINO Mike Castle in the Republican primary, but lost her bid to become a US Senator from Delaware in large measure because the GOP Rovian machine refused to support her in the final stretch. 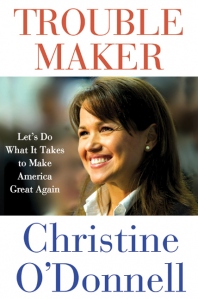 Today at 4 p.m., I will interview Christine about her campaign and her new book TROUBLEMAKER: Let’s Do What It Takes To Make America Great Again – a political memoir written by a young woman who was pillaged by the media from September 2010 into November 2010.

Join us for what promises to be an interesting chat with a very gutsy — and charming — young woman who’s not afraid to speak the truth, wherever it takes her. Link to listen at 4 pm ET:

Later tonight at 9 pm ET on our regularly scheduled program –

Norman Berdichevsky, author of The Left is Seldom Right, says the political left has a vested interest in the continued use of the term “Right vs Left”, how those terms came into being, and the danger inherent in their usage.