With President Obama preparing to preside over the official unveiling of the Martin Luther King, Jr. Memorial, the last thing the administration needs is a controversy over the “Made in China” label for the 30-foot structure. But the shocking truth, known for many years, is beginning to be picked up by some media outlets as the special event approaches. The project in honor of the American civil rights figure was “outsourced” to Lei Yixin, a Chinese government-approved sculptor best known for creating edifices glorifying Mao Tse-Tung, father of Communist China and notorious mass-murderer.

The 4 acres of land for the memorial were granted by Congress and $10 million of the $120 million cost came from U.S. taxpayers.  A law authorizing the memorial was signed by President Clinton in 1996. Ironically, the $10 million in federal funding was in a 2005 appropriations amendment co-sponsored by Senator Robert C. Byrd (D-WV), a former member of the Ku Klux Klan. 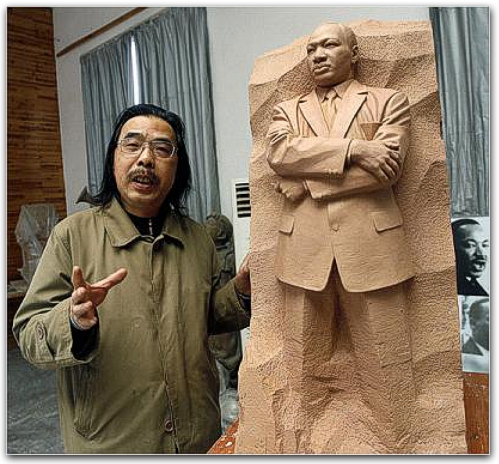 On Sunday, August 28, 2011, the 48th anniversary of King’s historic “I Have a Dream” speech, Obama will deliver remarks at the memorial dedication on the National Mall.  The White House says the memorial “will commemorate the life and work of Dr. Martin Luther King, Jr. and his contributions to world peace through non-violent social change.”

Mao, in a 1968 official Chinese government pamphlet, declared that King had been “assassinated by the U.S. imperialists” and that they had “killed him in cold blood.”

These statements were featured in a published “Statement by Comrade Mao Tse-Tung, chairman of the Central Committee of the Communist Party of China, In support of the Afro-American Struggle Against Violent Repression.”

“So this is what we’ve come to. Our national memorials are now being made in China,”commented one blogger. The London Telegraph said, “Critics have openly asked why a black, or at least an American, artist was not chosen and even remarked that Dr. King appears slightly Asian in Mr. Lei’s rendering.” Other observers agreed, with one noting, “King looks half Chinese in the sculpture. 1000 years from now that is what people will think.”

On Monday’s “NBC Nightly News,” however, anchor Brian Williams aired a “Lasting Legacy” story about the opening of the monument to the public without mention of any controversy. The omission may have something to do with the fact that NBC Universal was one of the financial contributors to the memorial. Other contributors include CBS and the government of South Africa.

Many public and political figures and business executives provided the leadership for the process of building a national memorial honoring King. A “Donor’s Wall” will recognize “high level” ($1,000,000 and above) donors.

But sculpter Gilbert Young, a world renowned black artist known for African American art, had formed a group, When King Is Ours, which was designed, in his words, to protest “the appointment of a communist Chinese artist, famous for glorifying the mass murderer Mao Zedong,” to do the King monument. He also complained that the project was using slave labor.

Chinese human rights activist Harry Wu, who spent 19 years in a Chinese prison, protested the choice, while Ann Lau, chair of the Visual Artists Guild, said, “Lei’s selection is as inappropriate as to have hired Leni Riefenstahl, the notorious Nazi propagandist film director, to direct a film biography of Simon Wiesenthal,” the Nazi hunter.

A petition launched by Young declared, “The planned monument to our beloved Dr. Martin Luther King, Jr. has been awarded to an artist from a country with a reprehensible history of civil rights violations against its people. The granite to be used for King’s sculpture will be harvested using slave labor–Chinese workers are not even provided masks to protect their lungs from the silica dust. They die in droves because the Chinese government considers them just as important as the students who protested in Tiananmen Square. The world watched the tanks roll over them.  No human rights, No civil rights, and yet the honor of sculpting Dr. Martin Luther King? Not on our watch.”

The petition declared, “King is OUR national treasure. We will not have an artist famous for his statues of the murderer Mao Tse Tung, and tool of a government that labeled King a ‘reactionary running dog,’ sculpting the King Monument.  Would we allow an artist famous for his statues of Hitler to sculpt Ann Frank?  Combine these facts with another: There is not ONE national monument to a leader of any country anywhere on this planet with the name of an African American artist on its base. We protest. And we demand the right to interpret and present our own historic proclamation in this first ever national monument to an African American man.”

In a plea to potential sponsors of the memorial, Young said, “Here was the opportunity for a national monument to a Black man in Washington D.C., to be created, developed, designed, and executed by the best that African America arts and culture and development has to offer, a testament to all our own achievements as Black people who benefited from the Civil Rights Movement.” 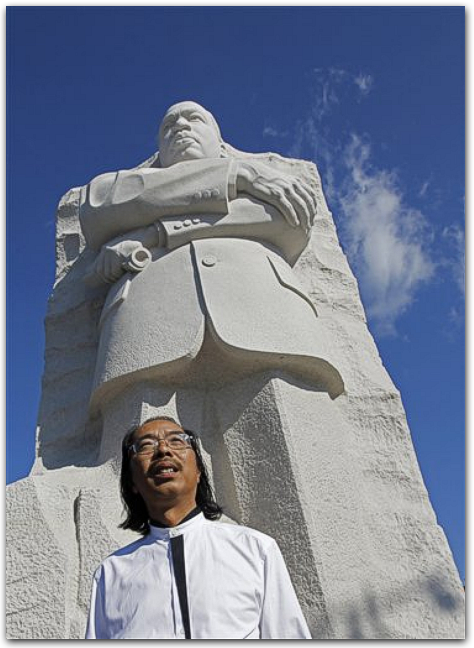 The California NAACP in 2007 passed a resolution declaring, in part:

“Whereas, The Martin Luther King Jr. National Memorial Project Foundation has chosen to outsource the production of the monument to Dr. King to the People’s Republic of China, the country with the worst record of human rights violations and civil rights abuses in the world, which is an affront to the ideal of human dignity…

“Whereas, The Foundation has chosen to employ as Artist-of-Record, Lei Yixin, an artist from the People’s Republic of China, who is renowned for his many sculptures and busts glorifying Mao Zedong, murder of 70 million innocent Chinese, which is in direct opposition to Dr. King’s philosophy and to the ideal of positive social change throughout the world…

“Be it finally resolved, that the California State Conference of the NAACP demands that the King Memorial Project Foundation name an African American artistic team as Artists-of-Record for the monument to Dr. Martin Luther King Jr. and that an oversight committee be created to enforce these resolutions.”

In Vermont, a major source of U.S. granite, granite manufacturers and labor unions condemned the decision to allow the monument to be created using stone quarried and carved in China by laborers working in deadly conditions for wages that amount to less than $2 per day.

According to one report, “Vermont’s congressional delegation — Democratic Sen. Patrick Leahy, independent Sen. Bernard Sanders and Democratic Rep. Peter Welch — wrote to Harry Johnson Sr., the president and chief executive officer of the [Washington, DC Martin Luther King, Jr. National Memorial Project Foundation, Inc.] in 2007 pressing him to use American granite instead of imported stone because ‘this great American monument should be built with American products.’”

Sanders settled for a pledge to use American products in other parts of the memorial.

The U.S. Commission of Fine Arts “found that the colossal scale and Social Realist style of the proposed statue recalls a genre of political sculpture that has recently been pulled down in other countries,” noted Thomas E. Luebke, commission secretary. The term “socialist realism” refers to a form of “art” first introduced in the Soviet Union that was used for propaganda purposes and to highlight communist leaders as heroic.

The King sculpture is 30 feet tall and shows him in a confrontational pose, with his arms crossed.

However, Jesse Jackson, a former aide to King, and members of the Congressional Black Caucus were given a special tour of the memorial and they have expressed no public criticism of the project.  Jackson will be speaking at the ceremony on Sunday.

An indication of what Jackson may say came in a recent interview on MSNBC, where he saidthat King would be “very mindful of the foes of President Obama, those that in fact attack him relentlessly, as he used his powers to stop the hemorrhaging of 100,000 jobs a month.” Jackson also claimed that King would be a champion of homosexual rights.

Cliff Kincaid is Accuracy in Media’s Director of the AIM Center for Investigative Journalism and may be contacted at [email protected]  Mr. Kincaid also administrates the site, America’s Survival, where he further documents the warfare brought upon our nation by the powerful and subversive Marxist/globalist axis.