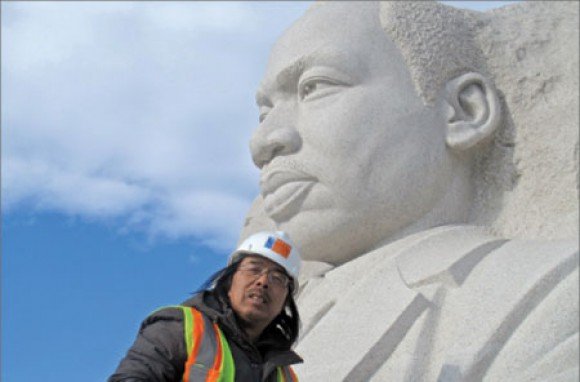 Human rights activist Ann Lau, a long-time critic of plans to have a Martin Luther King, Jr. monument for the U.S. built in Communist China by a communist sculptor, tells Accuracy in Media that “My view on the memorial has not changed since I wrote the article at National Review in September of 2007. It is unfortunate that the MLK Memorial Foundation had chosen financial expediency over what the Memorial should truly represent for generations to come.”

The Martin Luther King, Jr. Memorial Foundation had trouble raising $120 million for the monument, and $10 million of that came from American taxpayers. The federal land for the site was donated by Congress after President Clinton signed a law authorizing the project. There were rumors, never confirmed, that the Chinese regime donated funds to the memorial.

It is not exactly clear where the money went, but documents on the finances of the foundation show payments of hundreds of thousands of dollars over several years to the sculptor, Lei Yixin, known for making giant statues of Mao Tse-Tung.

Some money was apparently saved by using slave or cheap labor and cutting U.S. granite producers and labor unions out of the sculpture part of the project. China Daily reports, “The 159 granite blocks used to make the 9-meter-high statue of MLK weighed some 1,600 tons and were picked and carved in Quanzhou, Fujian province, and shipped from Xiamen to the port of Baltimore. A team of 10 Chinese stone-masons were brought over to help assemble the statue.”

Lau noted, however, that the King memorial website makes “no mention of where the stone was quarried. Perhaps they knew that it was quarried by prison slave labor.”

As the controversy mounts, there may be a reason why President Obama, America’s first black President, has been silent about the controversy over the memorial to the black civil rights leader. A Chinese publication has revealed that communist sculptor Lei Yixin is currently sculpting a “bronze portrait” or bust of President Obama. “The gift, which is near completion, will be presented to Obama on a suitable occasion,” the publication said.

The August 28 Sunday dedication ceremony has been cancelled due to the weather problems caused by hurricane Irene.

In her article, “Dissing MLK: A sculptor of Mao becomes a sculptor of America’s civil-rights hero,” Lau had said, “By turning a blind eye to China’s human-rights record by bestowing the honor of sculpting King’s statue on a regime propagandist, what kind of world perspective would we be projecting? King would have denounced China’s miserable human rights record.”

Lei Yixin is the head of the Hunan Provincial Sculpture Institute in China, which means that he is officially approved by the regime. The regime considers him a master sculptor and he is paid a lifetime stipend from communist authorities. He has giant sculptures glorifying Mao.

Lau was offended that Lei was quoted as saying that “He (Martin Luther King, Jr.) and Mao have a lot in common; at the same time, the two of them often supported each other.”

Lau commented, “Mao had said that the U.S. was founded on slavery and that when the blacks are freed, that would be the time when imperialist America is destroyed. Mao considered MLK as the tool to destroy the U.S.” She points to a Chinese website, “which considers Mao as having promoted revolution in all corners of the world and without Mao, the blacks would not have been freed.”

Mao had said King was assassinated by “U.S. imperialists.”

In this context, it is significant that critics say the sculpture presents King as a hero of Communist China using the techniques of “socialist realism,” made famous by the old Soviet Union and featuring monumental sculptures of communist heroes. The monument has even been labeled by one critic on the Huffington Post as “Martin Luther Mao,” saying, “It looks more like Martin Luther Mao. How disrespectful. MLK deserves better than a communist themed statue!!!”

A columnist for the Newark Advocate said, “My initial reaction to the public viewing (via news media imagery) of The Martin Luther King Jr. Memorial was of the body language of Mao Zedong.” He added, “The stance of a big boss man does not befit the figure of a man who preached and practiced nonviolent determination.”

Using photos and sculptures of King and Mao for comparison purposes, one blogger commented, “The sculpture of MLK looks eerily like a black Chinese Dictator. It’s as if the artist used the body from some old Chairman Mao statue and stuck an oriental looking Martin Luther King head on it. Seriously, check out his eyes and forehead. It’s as if the artist used Photoshop to lift MLK’s face off a picture and pasted it to a bust of Mao.”

The post ran under the headline, “Obama to Dedicate Oriental Looking MLK Statue Made in China.”

But on the website sculpture.net, one critic said, “I think it’s going to end up as more of a laughingstock than an eyesore—a variant on Andy Warhol’s giant portraits of Mao.” (Some of these works depicted Mao with a blue or red face or bright red lips).

At this point, former King aide Jesse Jackson and members of the Congressional Black Caucus have refused to criticize the project.

However, Lau told AIM, “In the Memorial website, there is no mention of Lei Yixin as being the master sculptor. Perhaps the foundation now regrets their choice.”