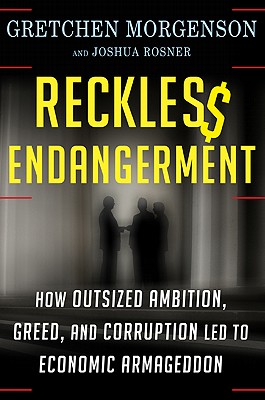 In a new bestseller, “Reckless Endangerment,” by The New York Times’Pulitzer Prize-winning business reporter Gretchen Morgenson and Joshua Rosner, Kansas City gets a surprising amount of attention—none of it good, but much of it juicy. What makes for the juice in this account of 2008’s “economic Armageddon” is Morgenson’s willingness to name names. Juicier still is her exposure of those seeming do-gooders who prompted the disaster.

My own experience in this debacle traces back to the late 1990s, when Mayor Emanuel Cleaver and his do-gooder buddy, Rabbi Michale Zedek, produced a much-praised report on minorities in Kansas City.

One point that the pair made was that banks were discriminating against minorities in the granting of home loans. They were in good company. Data produced by the Federal Reserve Bank of Boston—specifically that black residents were granted home loans at a rate of 61 percent compared to a white rate of 77 percent—inspired a race-baiting hallelujah chorus in the media.

At the time, I challenged this thesis in Ingram’s. I argued that if minorities were indeed being held to a higher standard than whites, their default rates should be lower. Instead, they were higher.

An exhaustive FHA study on home loans issued in the prosperous years 1992 to 1999 supports my thesis. In fact, black homeowners were defaulting on their loans more than twice as frequently as their white counterparts, and Hispanics were defaulting three times more frequently—the latter in a worrisome 13-percent range.

Cleaver and Zedek did not welcome criticism. At a large breakfast meeting, they rolled out the report findings and solicited questions. One nervous fellow timidly asked a good one: How could a single report endorse both race equality and race preferences?

Zedek turned on the poor guy as if he were Atticus Finch and on that evil peckerwood, Bob Ewell. Zedek was not uniquely indignant. Good-deed-doers and their media buddies everywhere were painting critics as racist friends of the plutocracy.

Much to her credit, Morgenson does not shy from pointing this out. She traces the crisis of 2008 to this conjunction of bullying do-gooders, especially those at Fannie Mae, and a Wall Street that was willing to package and sell as prime cut the tainted subprime crap these self-righteous mad cows were churning out. 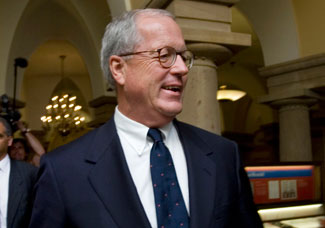 Needing Main Street’s help to keep Congress off its back, Fannie Mae honcho Jim Johnson launched Fannie Mae Partnership Offices across the country. One such office was in Kansas City. In 1996, during Cleaver’s eight-year run as mayor of Kansas City, Sen. Kit Bond stood right behind Johnson at City Hall as he promised $650 million in financing for the Kansas City office.

The larger purpose of a Partnership Office, however, was to enlist the support of local players in a paradoxical bit of sedition: keeping Fannie Mae, a creature of the federal government, free from government regulation.

In that era, both Hernandez and Stanley had made Ingram’s Power Elite. Moore, however, could not have had much influence, especially at Commerce Bank. Commerce, along with UMB, plugged its ears to the siren song of subprime lending.

Morgenson lands particularly hard on Hernandez. A “colleen” by birth and background, she married former KC councilman Bobby Hernandez, and the name proved a useful lubricant in her penetration of the race-conscious Fannie Mae apparatus.

At the time Fannie Mae came courting, Hernandez was executive director of the KC Neighborhood Alliance. Fannie Mae appointed her to its National Advisory Council and later gave her a plum position on the board of the Fannie Mae Foundation, which dispensed millions to “favored groups” each year.

In helping Fannie Mae pressure the lending industry into granting loans to subprime borrowers, those who were doing so no doubt felt they were doing the Lord’s work. Helping protect Fannie from congressional oversight must have seemed part of the larger mission.

That Fannie had become what Morgenson calls “a high-flying growth enterprise with a vast web of political patronage run for the benefit of its top executives” seemed to trouble none of the good-deed-doers involved.

In 2003, the Office of Federal Housing Oversight and its Republican allies began to lean hard on Fannie. As Morgenson tells it, one of Fannie’s best friends in Congress came to the rescue: “Republican Senator Kit Bond requested that the inspector general of HUD investigate the regulator who was investigating Fannie.”

The Fannie-friendly Massachusetts congressman, Barney Frank, led the counter-offensive, ridiculing those who challenged the “safety and soundness” of his beloved enterprise. When the oversight office issued a blistering report, Frank and Bond rallied in bi-partisan fury.

By this time, the less-grounded lending agencies like Countrywide and Kansas City’s NovaStar, which gets its own chapter, had caught on to the game. They became strategic partners with Fannie and embraced the vision of a “loan for every customer.” Good-deed-doing, they realized, was good for business—at least as long as Wall Street was willing to sell the bad debts their good deeds were producing.

In 2008, as collapse loomed, the friends of Fannie seemed oblivious to the fact that the road to this particular hell was paved with their good intentions. With Barack Obama leading the charge—closely advised by Fannie’s Jim Johnson, the architect of the disaster and the book’s major villain—they blamed Wall Street, which deserved it, and George Bush, who did not.

They still seem oblivious. Hernandez found herself a gig as chief executive of something called the Homeownership Preservation Foundation. In 2010, it issued a news release regarding a national public-service advertising campaign “to raise awareness of the Making Home Affordable Program.” Enough said?

And last year, Barney Frank, fresh off a flattering 60-minute profile, came to KC. The Kansas City Business Journal managed to report the trip with a straight face.

“U.S. Rep. Barney Frank, chairman of the House Financial Services Committee, recognized two local banks Wednesday afternoon for being the strongest in the continental United States. Frank, D-Mass., was invited to the event by U.S. Rep. Emanuel Cleaver, D-Mo., to recognize the strength and stability of Kansas City-based UMB Bank and Commerce Bank.”

The bankers managed to smile for the photo-op. Ask them, if you get a chance, how they really felt.

Jack Cashill is the author of numerous books which reveal important facts about the powerful and their sometimes clandestine power moves. Deconstructing Obama is his latest, released this February.

He is also an independent writer and Emmy winning producer, and has written for Fortune, The Wall Street Journal, The Washington Post, The Weekly Standard, American Thinker, also regularly for WorldNetDaily. Jack may be contacted at Cashill.com.