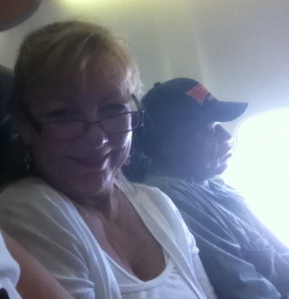 Today was a long one for entertainer and author Lloyd Marcus, his wife Mary and me. We all started with a 5 a.m. ET wake up — they from their Florida home, me from mine. We rendezvoused at the Orlando Airport where we boarded a nearly four hour flight to Denver. After brief catnaps and vain attempts at finishing a couple of inflight magazine crossword puzzles, we finally arrived in Denver where we connected on another outbound two-hour flight to Oakland CA, crossing time zones, gaining three hours in the process. But our internal clocks were still operating on east coast time. 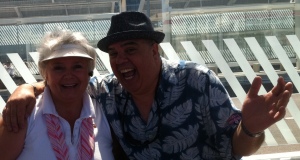 We finally landed, coming in over the beautiful San Francisco bay, and the first person we met while waiting for the hotel shuttle bus was our old Tea Party Express teammate and friend, comedian Jimmy Labriola, who toured with us on TPX III in March 2010. Since then, Jimmy had been headlining aboard cruise ships, providing laughs for shipboard passengers for twelve weeks and was definitely ready for some dry land. “How many times can you see icebergs and go “aaaahhh”, he said of his back-to-back cruises in Alaska.

Next thing you know, Gold Star Mom Debbie Lee’s flight had arrived and she joined us at the shuttle bus pickup. 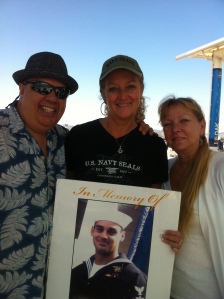 We were soon joined by Howard Kaloogian and his wife Martha, and after a quick bus ride to the hotel, we changed and headed to the Napa Fairgrounds for a Napa Tea Party and Tea Party Express VIP Dinner and concert under the stars at the Plaza Stage of the Napa Valley Exposition, emceed by author and speaker Kevin Jackson of the NAACPC.

Here’s an item about Jimmy Labriola joining us. His publicist has been busy!

NASHVILLE, Aug. 26, 2011 /Christian Newswire/ – Jim Labriola of “Home Improvement” fame will once again join the Tea Party Express on its fifth national bus tour. The comedian will be a featured performer at 30 Tea Party rallies across the country.

Kicking off in Napa Valley, Calif. on Saturday, the tour will travel from coast to coast carving through early primary states. The Tea Party Express will host a rally at each stop featuring guest appearances by supporters of the movement. This year’s high profile line-up includes entertainers like Jim Labriola and actor/singer Pat Boone as well as political figures Sharron Angle, Nevada Republican nominee for Senate, and Howard Kaloogian, chair of Our Country Deserves Better PAC, among others.

Labriola comments, “My previous experience with the Tea Party Express was amazing as I saw Americans turn out in droves to rally around their dreams for a better country. I’m proud to be a part of this great event and for the opportunity to bring laughter to the audience.”

The tour will culminate with a nationally televised “Tea Party Presidential Debate” in Tampa, Fla. on Sept. 12.

For a complete list of tour stops and additional information on the Tea Party Express, visit: www.teapartyexpress.org.

A favorite on the comedy club scene, guest star on multiple network sitcoms, and with motion picture appearances including Disney’s “The Santa Clause,” Labriola boasts a prolific career. In 1999, he dedicated his life to Christ and now travels nationally performing for churches as well as charity events, while speaking at business meetings and motivational seminars. Labriola’s first CD project in more than 6 years, Heart Improvement released March 22, 2011 and features comedy bits about everyday life experiences, including heart attacks, what it was like going to church before he became a believer, and growing up in an Italian family. For more information on Jim Labriola, visit www.hahajim.com and www.facebook.com/jimlabriola.