And my all time favorite: (Because I own this blog and dare to repeat myself.) 8)

This Too Shall Pass – Rube Goldberg Machine version
08/28/11 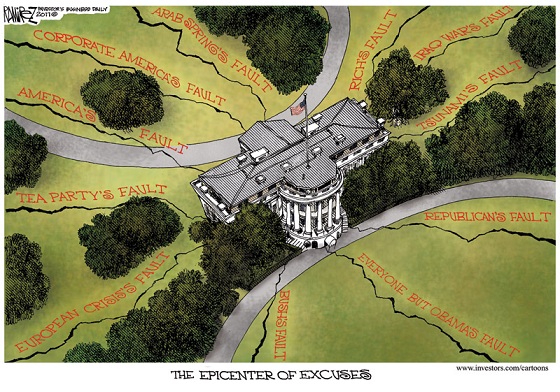 Who says socialists have no sense of humor? 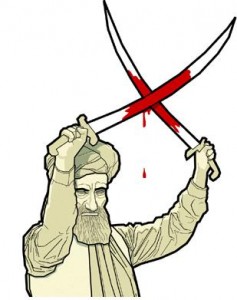 Graphic from the Illinois Conservative Examiner

New details and names have emerged regarding appointees that Obama brought into our White House who allegedly have ties to the Muslim Brotherhood. This article lays out what we have learned and calls for an immediate Congressional investigation.

It is no secret that Obama has embraced an enemy that openly states their desire to destroy Western Civilization and declares “Death to America.” Obama’s perplexing actions over the course of his Presidency appear to be more aligned with the agenda of the Muslim Brotherhood and United Nations than with America’s agenda.

From Obama’s illegal war in Libya with U.S. military support to Al Qaida insurgents (under UN direction) – to his most recent war waged in Yemen – to the murders of 30 U.S. special operations troops which included 17 members of SEAL Team Six who took out Osama bin Laden, the truth about Obama’s actions and those he has placed in our White House must be found.

As documented in our previous article, “Muslim Brotherhood in Our White House and the Murders of SEAL Team Six”:

Obama and Hillary Clinton are reaching out to the Muslim Brotherhood, a radical Islamic fundamentalist group committed to the destruction of America, Britain and Israel and identified as a terrorist organization by the U.S.

Obama began talks with the Taliban to negotiate with these terrorists.”

Obama sells tanks and weaponry to the Islamists in Egypt who want to suspend the treaty with Israel and annihilate them. They have formed a NAZI party that is gaining strength in Egypt today.

Obama invites people to our White House during Ramadan who have ties to the Muslim Brotherhood; he omits their names on the Iftar guest list.”

We now learn that the threat of Muslim Brotherhood infiltration runs much deeper in our White House. WND’s investigative reporting uncovered stunning information from a former FBI special agent in Washington D.C. and WND presents that information in: “Underpublicized threat deep in White House.”

Excerpt from the WND article:

“Another Brotherhood-tied figure influencing the White House is Azizah al-Hibri.

Obama this June appointed her to the United States Commission on International Religious Freedom. A Muslim professor, al-Hibri is also the granddaughter of a sheik, who claims the Saudi criminal justice system is more moral than the American one because it accepts blood money from murderers.

Al-Hibri herself has proclaimed: “Islamic fiqh (law) is deeper and better than Western codes of law.”

She served on the advisory board of the American Muslim Council and made joint appearances with its leader Abdurahman Alamoudi. Now defunct, the AMC was a front group for the U.S. Muslim Brotherhood, and Alamoudi was the Brotherhood’s top leader in America. He is now behind bars as one of al-Qaida’s top fundraisers in America.

Al-Hibri has also made appearances at Islamic Society of North America conferences. The Justice Department says ISNA is a Brotherhood front and recently named the group an unindicted co-conspirator in a plot to provide material support to Hamas terrorists.

Guandolo identified several other Brotherhood-connected agents of influence – all of whom are just as politically savvy and moderate sounding – who have worked their way into government positions, including:

Arif Alikhan, who was assistant Homeland Security secretary for policy development and is now a distinguished visiting professor of homeland security and counterterrorism at the National Defense University.

Navy Cmdr. Youssef Aboul-Enein and Jocelyne Cesari, a Muslim convert who previously worked with Saudi Prince Alwaleed bin Talal, both of whom teach at colleges within the National Defense University.

Even at the FBI, he notes, an Iranian-born Muslim has taken over the agency’s weapons of mass destruction program.”

SEAL Team Six was in danger if Obama brought individuals into our White House who have ties to the Muslim Brotherhood – a terrorist organization that created Al Qaida, Hamas and the Taliban. It was reported that it was the Taliban who murdered our troops on August 6, 2011.

There is no question that the Muslim Brotherhood would want to exact revenge for the death of Osama bin Laden. Obama not only enabled them by permitting public release of the identity of our troops, but he may also have unwittingly provided them with access to mission-related information from within the White House by his own appointees.

Serious questions remain from the moment Obama allowed the release of SEAL Team Six’s identity up to the day our troops were murdered.

How did the Taliban know that our troops would be in that location on that day? Who ordered our troops to use an inadequate National Guard Chinook instead of their SPECOPS Chinook which has advanced survivability capabilities? Where was the air support that was supposed to accompany our troops on that mission? After they were murdered, why did Obama release that militarily-devastating information to the public knowing it would embolden America’s enemies?

Do not be fooled by the media mantra that Obama made a “gutsy call” to take out Osama bin Laden. Think about that for just a couple of seconds… if Obama had said “no,” he knew his political career would be over. Self-preservation left Obama no choice but to permit SEAL Team Six to carry out the May 2011 mission they had worked on for years to take out Osama bin Laden.

It is what Obama did directly following the take down that is unspeakable. Releasing the identity of SEAL Team Six placed a bulls-eye right on their backs. Embracing the Muslim Brotherhood and potentially granting them access to military and National Defense information by bringing them into our White House is unthinkable.

An investigation must be conducted to determine whether Obama’s actions, associations and appointees led to the murder of our brave beloved troops at the hands of the Taliban. The families of our troops have a right to know and our fallen heroes deserve justice.

Congress must also hold Obama to account for the illegal wars he is waging in Libya and Yemen. All our soldiers remain at risk in any theatre of operation in the Middle East if Obama’s White House appointees have ties to the Muslim Brotherhood.

Contact Congress and demand that they begin an investigation immediately. Do not forget – they work for us; we pay their salaries and elect them to serve us, not the other way around.

Panetta and R2P to Usher in the American Fall

Media Blackout: US in Yet Another Illegal War … in Yemen

Just finished apologizing about ranting and raving during a wonderful dinner party… and I read this goddamn ridiculous crap. We are being insulted. We are being screwed. We are being stolen from and our representatives do not represent us, no they represent those stealing from us, in fact they enable it. All the Bastards… should be dropped into a deep hole of a prison and the key dropped into the deepest trench in the ocean.

NEW YORK (RealMoney) — The largest transfer of wealth from the public to private sector is about to begin. The federal government will be bulk-selling the massive portfolio of foreclosed homes now owned by HUD, Fannie Mae and Freddie Mac to private investors — vulture funds.

These homes, which are now the property of the U.S. government, the U.S. taxpayer, U.S. citizens collectively, are going to be sold to private investor conglomerates at extraordinarily large discounts to real value.

You and I will not be allowed to participate. These investors will come from the private-equity and hedge-fund community, Goldman Sachs(GS_) and its derivatives, as well as foreign sovereign wealth funds that can bring a billion dollars or more to each transaction.

In the process, these investors will instantaneously become the largest improved real estate owners and landlords in the world. The U.S. taxpayer will get pennies on the dollar for these homes and then be allowed to rent them back at market rates. A Huge Housing Bargain — but Not for You – TheStreet

That whenever any Form of Government becomes destructive of these ends, it is the Right of the People to alter or to abolish it, and to institute new Government, laying its foundation on such principles and organizing its powers in such form, as to them shall seem most likely to effect their Safety and Happiness. Prudence, indeed, will dictate that Governments long established should not be changed for light and transient causes; and accordingly all experience hath shewn that mankind are more disposed to suffer, while evils are sufferable than to right themselves by abolishing the forms to which they are accustomed. But when a long train of abuses and usurpations, pursuing invariably the same Object evinces a design to reduce them under absolute Despotism, it is their right, it is their duty, to throw off such Government, and to provide new Guards for their future security.

This coming election means everything… it is going to be the difference between this having any sort of small chance of ending well and the guarantee that it will end ugly. Even if we elect every single person who might be committed to ending this our road back to sanity will be a very long and difficult one. We have a HUGE portion of the American public who actually believe they have some right to my efforts as represented by my money. Then we have these vultures stealing whatever is left… 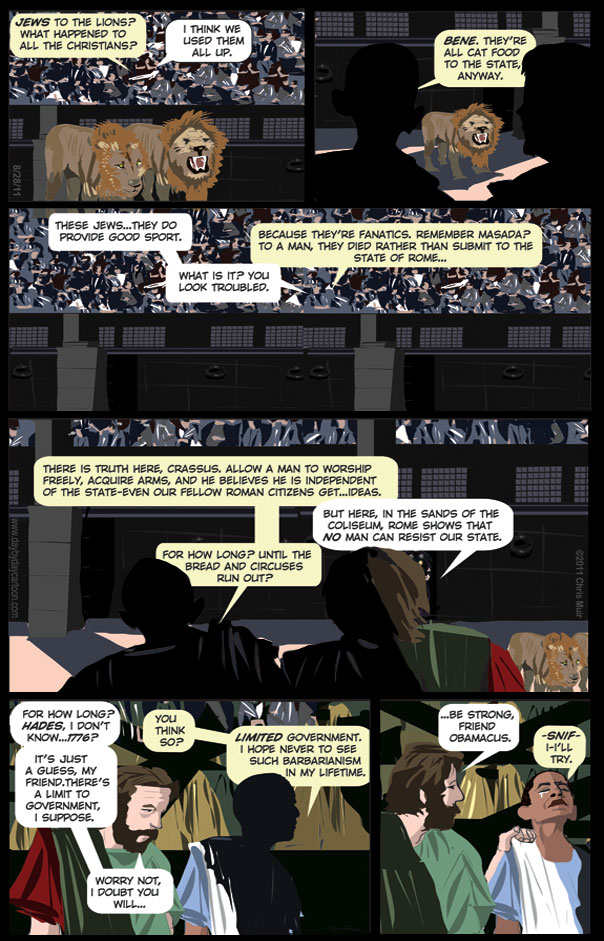 We’ve just finished our massive kickoff rally, and we have to say a big THANK YOU to Napa, California for an hosting the Tea Party Express “Super Rally!” We were thrilled to see a wonderful crowd of thousands join us to send the message it’s time to Reclaim America!

After that great sendoff just up the road from Nancy Pelosi’s district, we’re heading straight into Harry Reid’s home state of Nevada for big rallies in Reno and Elko! You see, we refuse to be intimidated by the attacks and insults from those on the far left who want us to go away. We’re hitting the road with everything we’ve got to send the message that We the People are stronger than “we the politicians!”

*Here are some pictures from the Napa “Super Rally” this morning!* 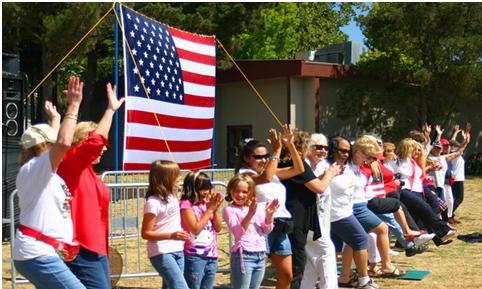 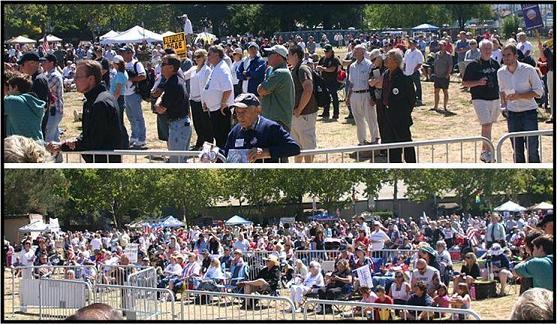 After such a great kickoff, we’re more excited than ever to be back on the road fighting for fiscal responsibility and economic prosperity for all! We are expecting to see tens of thousands more patriots over the coming days as we travel across the country. Please take a moment to see our full schedule and find the next rally nearest you!

Bullies like Nancy Pelosi and Harry Reid don’t like to see the tea party movement growing stronger – that’s why it’s more important than ever to show them we’re not going away, and we won’t be stopped! We need to make this tour a huge success in order to prove them WRONG, but we can’t do it without your help. We just gassed up the buses in Reno, and it cost us $1,200! If you can, please support this effort by making a contribution – HERE. You can contribute as little as $5 up to the maximum allowed $5,000 contribution.

If you prefer, you can also mail a contribution to our national headquarters at this address: