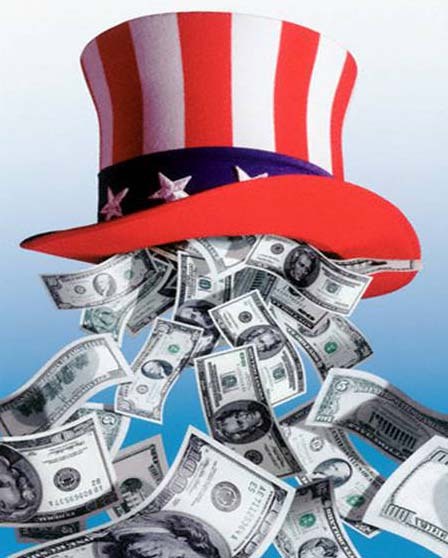 It can be difficult to put the federal debt and deficit into perspective because it is so large, but Dominic “Nick” Ovella of the law firm ‘Hailey, McNamar, Hall, Larmann & Papale, L.L.P.’ (in Louisiana, Mississippi and Texas) has simplified it in a way that many can relate to.

First let us look at the yearly budget for 2011 along with our total national debt and the spending cuts that the House, Senate and Obama agreed to make in June 2011:

“Let’s remove eight zeros from these numbers and pretend this is the household budget for the fictitious Jones family.

So in effect last month Congress, or in this example the Jones family, sat down at the kitchen table and agreed to cut $385 from its annual budget. What family would cut $385 of spending in order to solve $16,500 in deficit spending?

It is a start, although hardly a solution.

Now after years of this, the Jones family has $142,710 of debt on its credit card (which is the equivalent of the national debt).

You would think the Jones family would recognize and address this situation, but it does not. Neither does Congress.

The root of the debt problem is that the voters typically do not send people to Congress to save money. They are sent there to bring home the bacon to their own home state.

To effect budget change, we need to change the job description and give Congress new marching orders.

It is awfully hard (but not impossible) to reverse course and tell the government to stop borrowing money from our children and spending it now.

In effect, what we have is a reverse mortgage on the country. The problem is that the voters have become addicted to the money. Moreover, the American voters are still in the denial stage, and do not want to face the possibility of going into rehab.”

This obscene rate of spending will ultimately collapse our economy… as it has done in Greece and other countries that are on the brink of collapse. Tea Party Americans stand against this outrageous spending and that is one reason the Liberal Progressives attack them.

Liberal Progressives stand against the free market system and all indications are that they believe if they can collapse America’s economy, a Socialist economy can be ushered in under Totalitarian/Communist rule. At least… that’s what their websites, protest signs and organizations are preaching.

Who do you stand with?