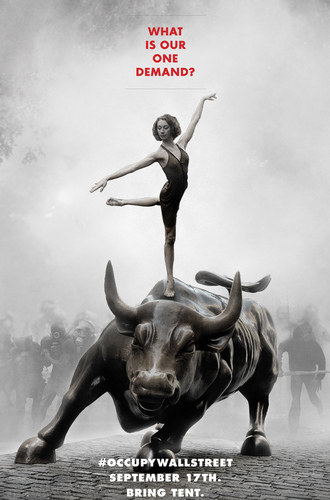 The “Anonymous” anarchists are joining the planned occupation of Wall Street, beginning September 17.

It says, “flood into lower Manhattan, set up tents, kitchens, peaceful barricades and occupy Wall Street for a few months … Once there, we shall incessantly repeat one simple demand in a plurality of voices.”

The September 17 protest is not confined to Wall Street. It is part of an international coordinated attack on the planet’s major financial centers. These people, if they can, want to shut down all major Western financial trading.

Meanwhile S17 is surging ahead internationally. Simultaneous occupations of financial districts are now being planned in New York City, Madrid, Milan, London, Paris and San Francisco. With a bit of luck, this list of participating cities will grow.

If we can pull together just the right mix of nonviolence, tenacity and strategic smarts, S17 could be the beginning of the global revolution we’ve all been dreaming about for so long … wouldn’t that be lovely.

“Non-violent,” in anarchist and leftist parlance simply means not harming or killing people. Property destruction, vandalism, cyber attacks, occupations, riots etc. are all “non-violent” and legitimate forms of protest to these people.

2 thoughts on “Wall Street, September 17: “Beginning of the Global Revolution…?””