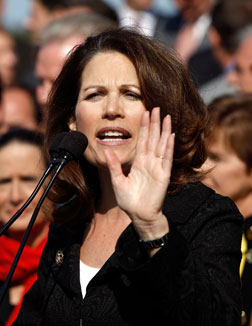 Michele Bachmann joins us today for our rally in Des Moines. It will be nice to see her again. Bachmann was with us last spring when we rallied in Minnesota.

We learned at dinner last night that Sarah Palin will be joining us in New Hampshire later in the tour. This will mark the 6th or 7th time she’s joined up with us throughout our last three rallies.

Because the Interstate is under water, we will have to detour about 40 miles out of the way this morning as we head to our first rally of the day in Sioux City, IA at 11:30AM.

Later we’ll be in Des Moines, IA at 5:00PM, and if you’re in the area, please come out and be with us for a little while and meet Congresswoman Bachmann. We’d sure love to meet you!

Here are the presidential candidates who will be joining us in the days ahead:

Ron Paul
No reply to any email ever.

Politico had something to say about Palin’s decision to join our rally:

Sarah Palin will indeed head to New Hampshire, appearing at a Tea Party Express event in Manchester on Monday, the group announced tonight.She will give “brief remarks,” according to a statement.

As it happens, that was several hours after it was revealed that Mitt Romney will attend a Tea Party Express event in Rollins Park, N.H. this weekend.It’s the second time Palin has been announced for a Granite State event after Romney’s plans in the state were made public, the first coming during his announcement event in June.