Another video that speaks for itself:

Video: “In the Faces of Teamsters“ 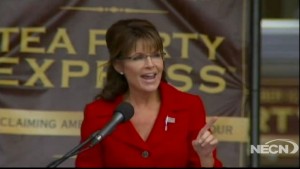 The tone was noticeably different Monday versus Saturday. Governor Palin assumed a roll much more that of a senior movement leader and less, a rally leader.

With Gov. Palin, though, unlike so many politicians, one may presume  her style was fitted to the substance she felt it important to handle, rather than substance bending to posture and  style.

To present that weighty message, we once again post a speech from this leader of the conservative, Tea Party, constitutionalist (and we would therefore hope, American Sovereignty) movements.

Her major themes blended into a call for unified spirit and effective work, in order to return America to authentism and freedom, over neo-Marxism — my terms, not hers:

Palin: Conservatives must unite against Obama“

But it is primarily for her words and her leadership that we have often featured Sarah Palin. A real American leader must tell the truth of what real warfare is waged against us and withstanding it with us, point the way to authentic American principles.

On October 22, I’ve been kindly asked to address a Freedom Fair organized by the Northwest Arkansas Citizens for Better Government.

This will be a very big event, with considerable sponsorship and projected attendance of several hundred people from Arkansas and neighboring states. email the organizers, or phone Jeff Oland on 479.871.9551 if you’d like to attend. Its going to be educational and inspiring, a great great fun!

Personally, I’m also really looking forward to my first visit to the South. I am in the US from mid-October to at least early November, researching, meeting colleagues and speaking.

I am addressing a “Tea Party” meeting in New Jersey on October 19 and an America’s Survival conference in Washington DC on October 27.

I don’t normally advertise my itinerary for security reasons, but this trip is a little different. If you’d like to meet me, interview me or want me to address an event, please email me.

I will also be promoting my new book Barack Obama and the Enemies Within, which is an edited compilation of the Obama Files, originally posted on this blog.

Any contributions towards the cost of travel and accommodation are gratefully received – through the PayPal button here. I fund my research trips solely through contributions and out of my own pocket.

So looking forward to my next visit to the most hospitable country in the world.

Eric Odom writes about Feliks, a Ukranian who fears for our country… 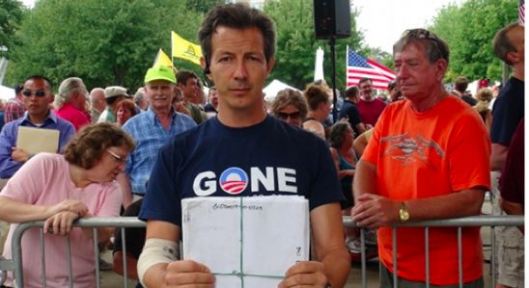 I’m currently on the Tea Party Express bus tour. The tour is hitting 29 cities in 19 states, and provides an incredible opportunity to meet people from all walks of life with vastly different yet unifying stories. One of those stories provides a profound look into the way the Obama agenda is destroying the economic engine of America.

Meet Feliks Sukhovitsky, a home builder from California who decided to drive his truck across America and follow the Tea Party Express.

I’m posting the video interview I did with Feliks below… the two videos are brief but give you a good look at his story. In short, Feliks came to America some 22 years ago as a refugee from Soviet controlled Ukraine. He had about $20 USD to his name and a craving for the American dream.

Feliks started out as a painter and eventually became a homebuilder. Feliks was able to obtain loans and contracts to build homes until the Obama machine took over. Since then, the funding for his projects has frozen and his entire company is stalled.

Watch the interview below.

In the second video I asked Feliks what his message is to Obama. Feliks makes it clear he simply wants to be allowed to create jobs and the government needs to get out of the way.

As Feliks explained, his permits represent a project that would create 10 jobs. According to research he references, there are around 1,000,000 of these kinds of projects currently stalled. That same research suggest the average jobs-per-project is 3. This is 3,000,000 jobs stalled due to Obama policy and agendas.

To make matters worse, each of these projects represents hundreds of thousands of dollars that would flow into True Value, Menards, Home Depot, Lowes and other builder supply stores who work with tens of thousands of vendors. Think of the jobs THAT damages!

It’s amazing that Feliks, just one man, is so deeply tied to an entire economic engine that has been completely shut down due to over-reaching government regulation and financial red-tape.

I’ve always known Obama was aggressively acting malicious against the business environment of America. But this is the first time I’ve been given an insider’s glimpse of how badly it has damaged the construction industry.

Stacy “The Other McCain” has this today:

Writing “as a proud former union member and the wife, daughter, and sister of union members,” Sarah Palin denounces the “thuggery” of Jim Hoffa:

Union bosses like this do not have your best interests at heart. What they care about is their own power and re-electing their friend Barack Obama so he will take care of them to the detriment of everyone else. . . .

Recently someone commented: “I’m a union member. I’ve been a Democrat all my life. Now I’ll vote for anyone with a plan to save America.” I know what that person is feeling. I want all good union brothers and sisters to know that there is an alternative. The grassroots, independent Tea Party Movement articulates a real alternative rooted in free men and free markets, not the cronyism of Barack Obama and the permanent political class in DC. Their cronyism is why we have no job growth, massive unsustainable debt, and a housing market in the tank. Too many politicians are simply addressing the economic symptoms instead of fighting the underlying disease. The path forward is through reform. . . .

In the meantime, good union brothers and sisters, don’t let Hoffa tell you what to do. He doesn’t represent the real interests of working men and women. He’s not doing you any favors. He’s just living off your paychecks. 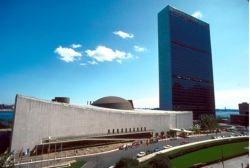 According to a press release disseminated by Amcha-Coalition for Jewish Concerns, (an umbrella organization of Jewish activists) a massive display of civil disobedience will be held in New York City on September 20th as a vocal protest of the Palestinian-Hamas bid for statehood at the annual United Nations General Assembly meeting. The protest will also spotlight the continuous animus that the world body holds for Israel and its nefarious campaign aimed at demonizing the Jewish state.

Calling on “Israel’s supporters to stand proud and strong as they say a resounding “no!” to a unilateral declaration of a Palestinian state,” the organizers said that the protest will be led by a sizeable contingent of rabbis who will gather along with participants at 10 am at 40th Street & First Avenue on September 20th. Other participating organizations will be listed as the date approaches.

Longtime Jewish activist and national president of Amcha-CJC, Rabbi Avi Weiss of the Hebrew Institute of Riverdale said, “Those who choose will step into the street as a moral act of conscience to block traffic to the UN. We will show the world that the UN’s anti-Israel ‘business as usual’ cannot continue. When the police order those in the street to step aside, those who choose to remain on First Avenue will be subjected to peaceful arrest. We urge all who are concerned about the security of our brothers and sisters in Israel to join us.”

Event coordinator Glenn Richter said, “Tuesday, September 20th will be a dramatic date in the history of our people. The Palestinian Authority will ask the United Nations General Assembly to endorse a Palestinian state. Palestinians will march en masse inside and around Israel. Now is the time for those who truly love Israel and are deeply concerned about its future as a Jewish state to translate their convictions into real action. We are calling upon anyone over the age of 18 to join us as we vehemently protest the endorsement of a Hamas-led terrorist state in Judea and Samaria.”

Adding that the Jewish people have a choice of either passively witnessing history unfold before their very eyes or taking concrete action to change the course of history, Richter said that it would be “more than a shame not to present a viable Jewish response. Israelis live under the constant stress of terrorism and threats every single day of their lives and the least we can do is devote one day of our lives in support of our holy land and our brethren.”