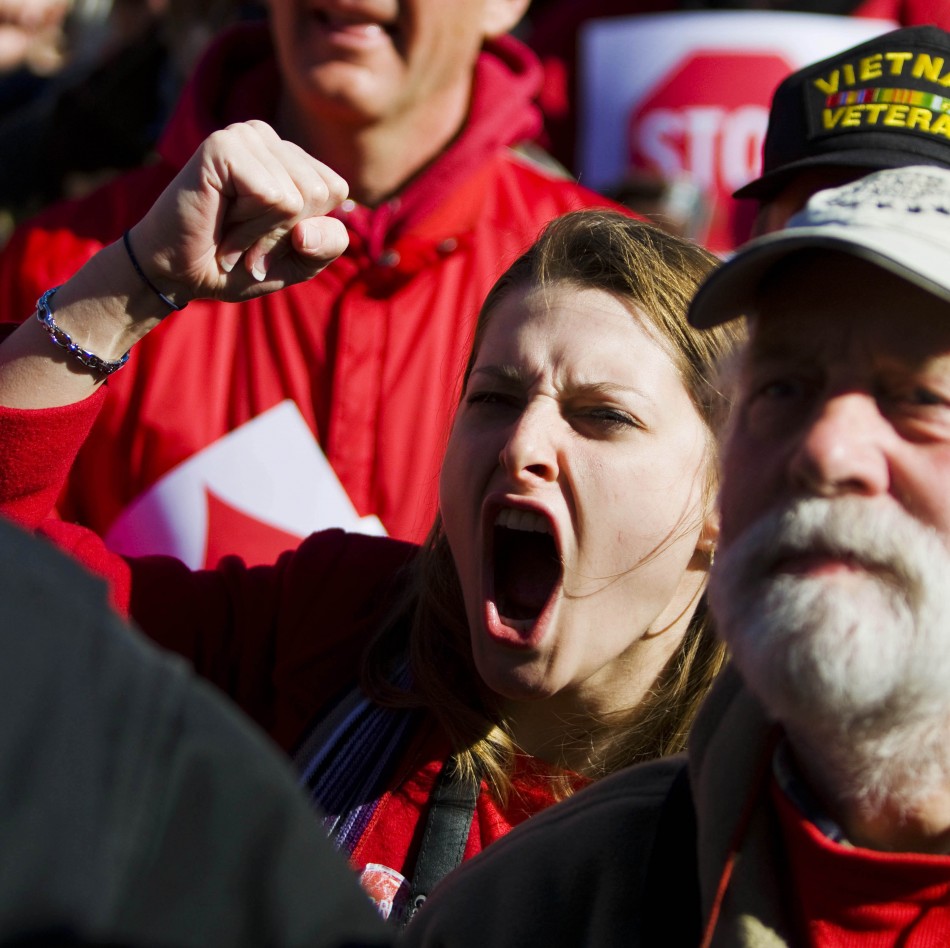 The masks are all coming off and the unions are one with the Communists now. The comrades in arms are stirring the chaos and violence pot calling for all out war with the Tea Party and American Conservatives, with the blessings of the President. One might wonder how a radical minority could push for violent confrontation with the majority in America and get away with it – great planning and execution of the Cloward and Piven strategy is the answer. You can hear the cries of Za Rodinu! ringing on the American battlefield.

The unions and Communists have found brothers in arms in the Progressive Right as well. Witness the vicious attacks on Sarah Palin from Republican pundits such as Laura Ingraham and Ann Coulter. They wasted no time in trying to denigrate Palin while pushing known Progressives on the Right such as Mitt Romney and Chris Christie. Don’t be fooled… same Progressive dance, different political tune. These are not the Conservatives you are looking for.

Using a panoply of derogatory terms such as Hobbits, terrorists, barbarians at the gates, Nazis etc. to label Constitutional Conservatives, the Left is in full ‘provoke’ mode since they must have violent confrontation to further the goals of the Communists. Violence must reign in the streets if the top is to come down on Americans with Martial law and a suspension of Constitutional rights. It is the only real way a dictatorship can take hold. It’s their hoped for checkmate.

And it would seem, that the country so far is declaring a great big old ‘meh’ when these things occur. For instance, take a look at the free pass the International Longshore and Warehouse Union got after kidnapping security guards and then holding them hostage. Some were arrested, but only for trespassing. I’m sorry, I thought kidnapping was a crime… Probably only for Conservatives though. Then there is the awesome language being hurled at Tea Party members from union thugs. Not only vile, but threatening. Nudge, poke, push, shove.

Our President travels with, hobnobs with and evidently, cuddles with union thugs. His BFF, Richard Trumka, has blood all over his hands and dirty money stuffed in his thuggish pockets. He doesn’t give a damn about union members. No, his main course is power and wealth. The man sold his black shriveled soul long ago and walks with Communists and brutes to attain what he wants. He even stooped to politicizing 9-11 for the unions’ benefit, incredibly blaming Conservative leaders for the current state of ‘hate’ in the nation:

AFL-CIO President Richard Trumka released a statement Friday commemorating the 10th anniversary of Sept. 11 — and promptly turned it into a political opportunity to bash Glenn Beck, Rush Limbaugh, Karl Rove and other conservatives for opening “the door to hate” in the decade since the attacks:

Jimmy Hoffa is certainly no better and his call to “take these son of a b*tches out,” (re: Tea party) is heartfelt and sincere. And if he has to spill blood and leaves corpses in the union wake, well it’s the union way. Yep, the union jackals flank Obama waiting for fresh meat to be thrown their Communist way. And Obama is just itching to gather Tea Party activists to throw to his pets. Count on it.

The unions are raping America of every dime they can get from her before she falls. This is not your father’s union any more and to stand with them is to walk the red line. There will be blood in the streets, of that I have no doubt. The unions and the Communists have been emboldened and encouraged by President Obama. They see this as their time and their chance to seize control through another massive expansion of federal power and through force and violence. And it is not only the unions, but from within Obama’s ranks that you see strident calls from the likes of Valerie Jarrett to just pass the new American Jobs Act which hasn’t even been put on paper yet, much less read and studied. They really believe all of us are stupid and just need to do what we are told. Just ask Maxine Waters and the Congressional Black Caucus.

Will anyone have the guts in the mainstream media to research all the ties between Obama and the unions and the Communist Party? Follow the stench of corruption, money and violence. All roads lead to the White House.

The Communist attack dog People’s World is touting Obama’s American Jobs Act which is an American sacrifice on the alter of big labor. It will not create jobs, it will simply funnel more money to the unions and the Communist movement. This is not what the majority of union workers want I would wager and I know this is not what America needs. It is another nail in the coffin struck by those ushering in the American Fall. In their own words:

President Obama gave a forceful speech and proposal for jobs Sept. 8 before a joint session of Congress. It may well have been a turning point moment in his administration.

Faced with a persistent economic crisis and growing grassroots call for action to address it, the president proposed the $450 billion American Jobs Act.

The American Jobs Act has the potential to unite broad sections of the U.S. public. A bipartisan bill drawn from both Democratic and Republican proposals, Obama’s jobs bill begins to address the unemployment crisis by spending on roads, schools and summer youth jobs, extension of unemployment compensation and tax breaks for businesses.

The president has called on the American people to join him in calling for the legislation’s passage.

Over the coming weeks, rallies, vigils, flash mobs, letter-writing campaigns, phone banks, even work place job actions directed at Congress will have to occur on an unprecedented scale to demand action in support of the president’s proposal.

The president has called for youth summer jobs program and rebuilding public schools. Young people and students have an important stake in this legislation passage. Their creativity, energy, ideas and fighting spirit will add an essential ingredient.

Millions of signatures have to be gathered in support of the AFL-CIO’s and other jobs petitions.

Last night the president made it clear that he stands four square in favor of jobs, collective bargaining, along with Social Security, Medicaid and Medicare. Those that favor democracy and equality can do no less.

The call has been made. No excuses. The time to act is now.

There you have it. Conflict and violence is coming. Can you feel it? You can pretend this is not happening and bury your heads in the sand. But, trust me, your enemies are not doing that. They are about to strike what they hope will be the killing blow to the world’s only free Republic and usher in a Totalitarian regime where the elite rule over an enslaved class of underlings – that would be the American people. The unions are turning red and shedding the white and blue. Don’t let them steal America’s colors and whitewash their red violence in pursuit of a new dark age.