By: Daniel Perez, with additional reporting by Fern Sidman

With Jewish Support, GOP Retakes Seat Held by Democrats for Nearly a Century 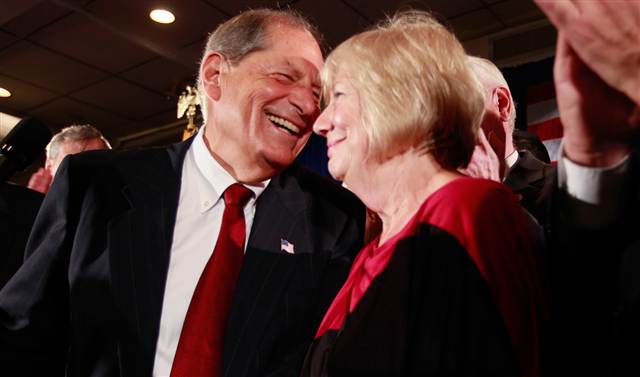 MSNBC: Republican Bob Turner, left, smiles as he leans in to kiss his wife Peggy while addressing supporters during an election night party in New York on Tuesday. Turner scored an upset victory over Democrat David Weprin.

In an historic special election, Brooklyn and Queens voters have chosen a Republican to represent New York’s 9th Congressional District, a district that has rested securely in the hands of the Democratic Party since 1923 (and in fact, has only elected two Republicans since 1874). Some see the election of a GOP candidate in what has long been a liberal stronghold as local citizens’ way of rejecting certain policies of President Barack Obama’s administration, in particular the administration’s approach towards Israel.

Ironically, Turner’s victory, partially stemming from the pro-Israel sentiments of his new constituency (approximately half of which is Jewish) means defeat for his Democratic counterpart, David Weprin, who is himself an observant Jew. Turner is not Jewish, but has been outspoken in his support for Israel, whereas Weprin is seen as toeing the party line. Weprin has, in fact, protested President Obama’s Israel policy, saying at one point that “I’m a Democrat, but I’ve been very strong opposing President Obama’s statement about going back to the pre-67 war boundaries,” but party politics being what they are, Weprin can only step so far out of line before losing the support of his fellow Democrats. Indeed, his support for New York’s same-sex marriage legislation has alienated local Orthodox Jews, who make up a not insignificant segment of the 9th District electorate. In any case, Weprin is seen as a representative of his party, with which many New York voters have become disenchanted over the course of Barack Obama’s presidency.

The mood at Bob Turner’s campaign headquarters was electric. Even before the announcement of Turner’s victory, former New York City mayor Ed Koch, a (Jew and) Democrat, voiced his adamant support for the GOP candidate, stating in no uncertain terms the motivation for his endorsement. “This election is sending a message to the government that Israel is a very important issue,” said Koch. “What is intolerable is that President Obama has thrown Israel under the bus, and I dedicated myself to Bob Turner’s campaign because I wanted to stand up for that issue,” he added.

Koch also made note Turner’s assurance that he would not lead congressional efforts to privatize Social Security or Medicaid, emphasizing the importance of maintaining the solvency of those and related government programs.

New York State Assemblyman Dov Hikind, who, like Koch, is both a Jew and a Democrat, also crossed party lines and echoed the former mayor’s sentiments. “It’s incredible that the people of this district, in which Democrats outnumber Republicans three to one, voted for what’s best for their community,” he observed, adding: “The people of the 9th Congressional District are broadcasting the message across the breadth and length of America that we are sick of the policies of the Obama administration.”

Indeed, the Turner campaign has been seen by many as a “national rallying point for Republican activists,” as has been pointed out by political blogger Micah Sifry. As of Tuesday night, Bob Turner’s online support dwarfed that of David Weprin, with nearly 5,700 Facebook fans to Weprin’s 3,900. However, as Sifry notes, some 1,400 of Weprin’s fans are in New York City, compared to just 600 for Turner, reaffirming the national significance with which conservatives have imbued the election, an idea reflected in the remarks of both Koch and Hikind.

Speaking to the Jewish Voice reporter, Fern Sidman, on the night of the election, a rabbi from Boro Park named William Handler said that Weprin was “worse than Anthony Weiner.”

“Whereas Weiner disgraced himself,” Handler said, “David Weprin disgraced the entire Jewish community by betraying his values, by not only voting for same-sex marriage in the New York State Legislature, but by marching in the gay pride parade.”

“When he displayed his utter contempt for Jewish values, his actions were both arrogant and stupid,” he added.

During his victory speech, Turner praised the Orthodox Jewish community for their efforts, saying that he saw a great deal of “community organization, knowledge and know-how,” to bring out the vote. He further declared that he is “proud to be a unifier of Jews and Christians with shared values.”

“Tonight we lit a candle, but soon it will be a bonfire,” he said. “We sent a strong message to Washington: Mr. President, you are on the wrong track. The people are tired of fiscal irresponsibility, of unemployment and exploding national debt.”

“Mr. President, we have had it with your treatment of Israel,” Turner declared. Directing his words to the crowd that came out to show their support, Turner expressed his belief that, “The only hope is our voice; and our voice is reaching those in Washington,” staying true to his populist roots.

[Editor’s Note: The Jewish Voice, which has expressed its support for Congressman Turner during his campaign, wishes Bob continued bracha v’hatzlacha (blessing and success) in his endeavors. May he merit to fulfill his duties with wisdom and integrity, and may he deal kindly with his countrymen and particularly the Jewish people, both here and in Israel. As he has pledged, so may he be given the strength to do.]