A former Marine, and a man I’m proud to call friend, recently had a flag raising ceremony at his home in Pennsylvania. The flag raising was attended by Ken’s friends and neighbors (one of whom — a Vietnam veteran himself — helped with the heavy lifting), and an active duty Marine Sergeant Major. They raised three flags: Old Glory, the Marines Standard and the flag of a Pennsylvania Rifles regiment, to the accompaniment of the music appropriate for each, and a musket volley salute. Two days after the flag raising ceremony, the Stars and Stripes flew at half mast, in honor of those who died in an act of war on American soil ten long years ago.

In and of itself, raising a flag generally merits little notice, however a twenty-five foot flagpole installation at the domicile of one of American’s finest — one who has stood on the wall that most only hear of in metaphor — is considerably more than a token hat tip to patriotism. It is our nation’s guidon, front and center before the world. It is unabashed and unashamed pride in what makes our nation exceptional and the greatness of those who have fought and bled to keep it free.

More than this, the flag in question rises on the tenth anniversary of, among other things, a modern day of infamy. And it says to all who see it, “We are still here and we still stand tall.”

I asked Ken if he would be so kind as to pen something to express his own impressions and he obliged.

Here it is then, in his own words. 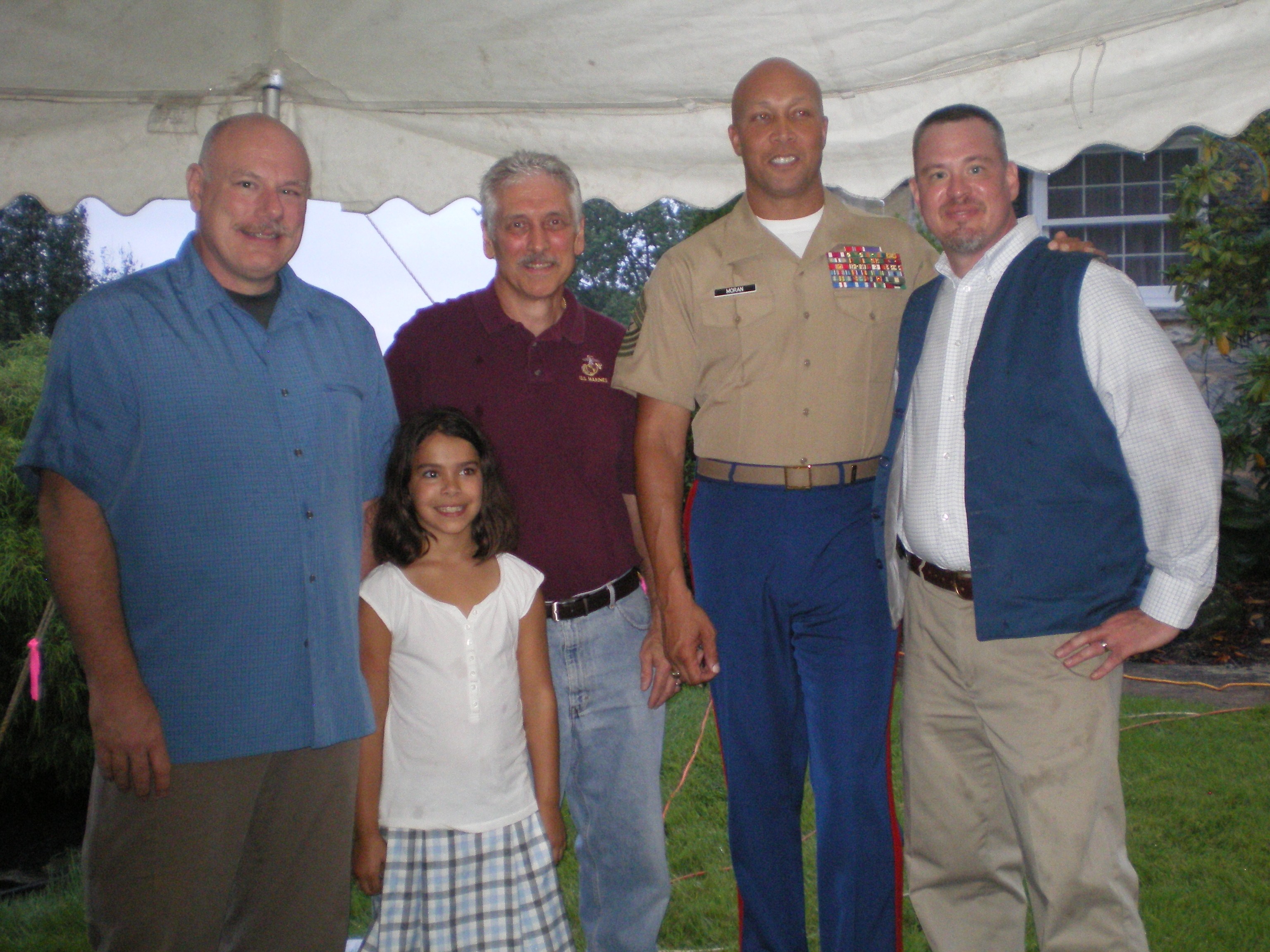 On September 9th, I hosted a party for a Flag Raising Ceremony at my house. Garry asked me to touch on a few thoughts about why I decided to have a party to dedicate a flagpole, remember the Marine Corps and to celebrate the 10 year anniversary of 9/11. It seems an odd thing to celebrate, a tragedy, doesn’t it?

One word sums it up. Heritage.

As a young Marine, I learned all manner of names, dates and important events that the Marine Corps feels both defines it, and that young Marine recruits need to know before they can graduate and earn the title of United States Marine. We gained this knowledge in formal classes. We learned it from our Drill Instructors. We had to pass a written test demonstrating we knew who Archibald Henderson was; when and where the Marine Corps was founded.

To most Americans, such things might be little more than trivia. A college student might memorize the material, pass the exam and promptly discard it from memory as he prepares to repeat the exercise next semester. But to Marines, this is our legacy. It is our heritage. We draw upon the deeds of those who came before us for strength and inspiration.

Take for example the Marines and Navy Corpsman who raised the American Flag on Mount Suribachi. I would wager that there exists no other picture in American history that an American wouldn’t recognize, know what that picture was of and what it meant to the war effort in WWII. For decades afterward, the men in that picture were regarded as heroes and Marines to this day draw inspiration from them.

However, if we dig down past the hero label and into the lives of these men, we find that they were ordinary men who performed extraordinary things. And for me, their true life stories are a source of great strength. Of the six men depicted in Joe Rosenthal’s picture, three (Franklin Sousley, Harlon Block and Michael Strank) did not survive the battle; the three survivors (John Bradley, Rene Gagnon and Ira Hayes) became celebrities upon the publication of the photo.

Sergeant Michael Strank, born in Czechoslovakia, immigrated as a child with his family to Cambria County, near Johnstown, PA. He joined the Marine Corps after serving in the Civilian Conservation Corps, a public relief program for unmarried, unemployed men whose families had been hit hard by the Great Depression. It was hard, physical labor that prepared him well for life as a young Marine.

He was the oldest and most experienced of the six men in the picture. He was a veteran of the WWII era Marine Raider Battalion’s amphibious landings in the Solomon Islands, Guadalcanal and the hard fighting that took place in the Battle for Bougainville. Six days after raising the flag on Mount Suribachi, his squad came under heavy fire and took cover. While forming a plan of attack, he was struck and killed by friendly naval gunfire. Corporal Harlon Block, who looked up to Strank, as all of the squad did, took over command.

Corporal Harlon Block idolized Strank and followed his every instruction without question. L.B. Holly, who served in his squad and who was with him when he died, said of Strank, “He was the best Marine I ever knew.” Corporal Harlon Block, of Texas, was killed in a mortar blast only a few hours after his squad leader, Sgt Strank.

A third member of Sgt Strank’s squad, PFC Franklin Sousley from Kentucky was killed on Iwo Jima 26 days after helping to raise the flag. As the terribly bloody battle for control of the island raged on, he was shot by a Japanese sniper in the back.

Rene Gagnon, of New Hampshire, was not a member of Sgt. Strank’s squad. He was assigned to the Battalion Headquarters as a runner. In fact, Ira Hayes despised Gagnon. Communications up the hill that day were faulty and Gagnon got orders to carry walkie talkies and batteries to the forward position. As he was leaving, the Battalion Commander gave him a larger flag to take along with him up the hill and with orders that, “Colonel Johnson wants this big flag run up high, so every son of a bitch on this whole cruddy island can see it.”

For years after the war, Gagnon tried to capitalize on the fame he had from the War Bond tours. During the cross-country tours, businessmen, politicians and government officials – all caught up in the drive of winning the war and the euphoria of meeting a “genuine war hero” – promised him lucrative work and notoriety. Those jobs never materialized. He unsuccessfully tried to break into movies and television. “I’m pretty well known in Manchester,” he told a reporter. “When someone who doesn’t know me is introduced to me, they say, ‘That was you in The Photograph?’ What the hell are you doing working here? If I were you, I’d have a good job and lots of money.”

Gagnon died at age 54 of a heart attack. He was an alcoholic and worked at menial jobs, but was fired from most of them. In his last job, he had worked as a janitor at an apartment complex in Manchester. As recorded in the book Flags of Our Fathers, in his latter years Gagnon only participated in events that praised the flag raising at his wife’s urging. He said she enjoyed the limelight, whereas he, by that time, no longer did.

While Rene Gagnon sought after fame, Ira Hayes, Pima Indian from Arizona, ran from it. He made Gagnon swear an oath not to reveal he was one of the men in The Photograph. Gagnon kept to that oath until he was ordered, then threatened under punishment, to reveal Hayes’ identity. Hayes was immediately recalled from the Pacific to tour with Doc Bradley and Rene Gagnon.

When men called Ira Hayes a hero, he said the only heroes he knew were the men he served with. After the war, Hayes accumulated a record of 52 arrests for public drunkenness. Referring to his alcoholism, he once said, “I was sick. I guess I was about to crack up thinking about all my good buddies. They were better men than me and they’re not coming back.” On the morning of January 24, 1955, Hayes was found dead, lying in his own blood and vomit, near an abandoned adobe hut in Sacaton, Arizona. He had been drinking and playing cards at a bar on the reservation with his friends and brothers the night before. He died at age 32.

Doc John Bradley was the only of the three survivors who managed to lead a healthy, long life. He did his best to put the war behind him, but his wife said he’d cry in his sleep for years after the war. He never spoke of it to his eight children. They never knew he was one of the six in The Famous Photograph. And they never learned he had won the Navy Cross until after his death, when a family friend told them what their Dad had really done in the war.

The stories from Antiquity give us legendary heroes. The Greek and Roman tales speak of gifted men and children descended from gods. The English and European myths and fables give us stories of Beowulf and King Arthur. Heroes serve as conveniences for telling stories to our children at bed time. They teach lessons and epitomize the good qualities, rarely having any of the bad, found within human nature. Such men are so extra-ordinary that we cannot draw upon their stories for strength when we need it. They’re not real.

I like to believe that the reason the Marine Corps wants its young Marines to know about those before them, including their flaws, is so they can draw upon their stories for strength. Admiral Nimitz said of the men on Iwo Jima, “Uncommon Valor was a Common Virtue.” Ordinary men did extraordinary things. I won’t call men like them heroes; they wouldn’t – and didn’t – want that label.

What ordinary men and women did the morning of September 11th, 2001, also gives us inspiration. Those people did what Americans do. All across the Northeast: high in the skies of the World Trade Center; on the ground at the Pentagon; in the air over Pennsylvania – ordinary people did extraordinary things. The first blows were struck back at the terrorists when the passengers of United Flight 93 fought back. The nation was unified and in the days after, we showed the world what sort of character Americans had. We mourned; some mourned while they worked. And we vowed not to tremble. Just as Japan awoke a nation and discovered what a determined America could accomplish, so have the Islamic terror groups.

Ordinary people performing extraordinary deeds – this is our heritage and those who did them serve as our inspiration. 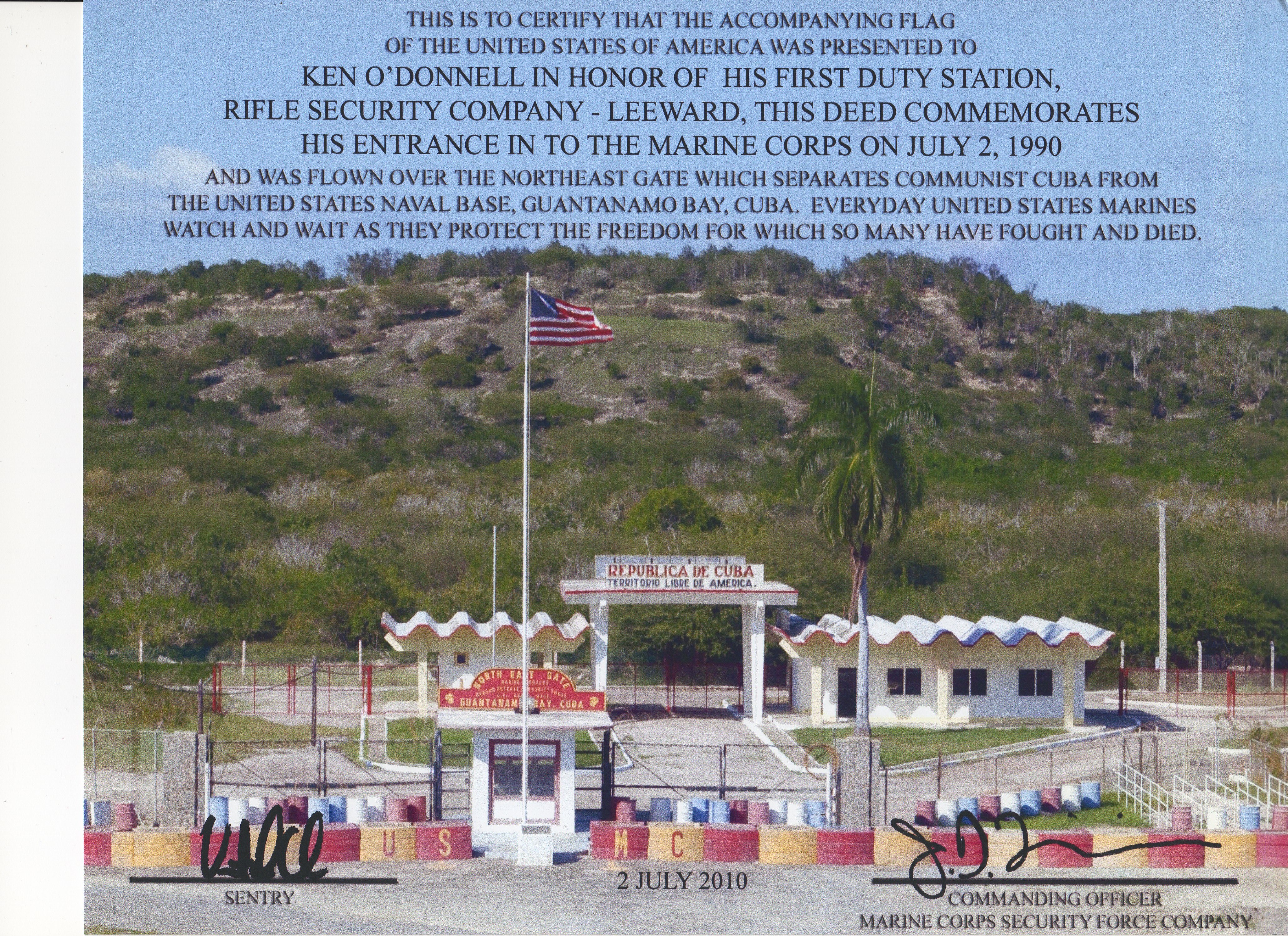 The video of the ceremony is in three parts, and can be found on YouTube:

And, yes, the ceremony was held after dark. Sometimes, when you assemble a cadre of working stiffs and active duty troops, evening is all you’ll have. However, 9/11 was a fine day. Perhaps just a little more somber than it was ten years ago. 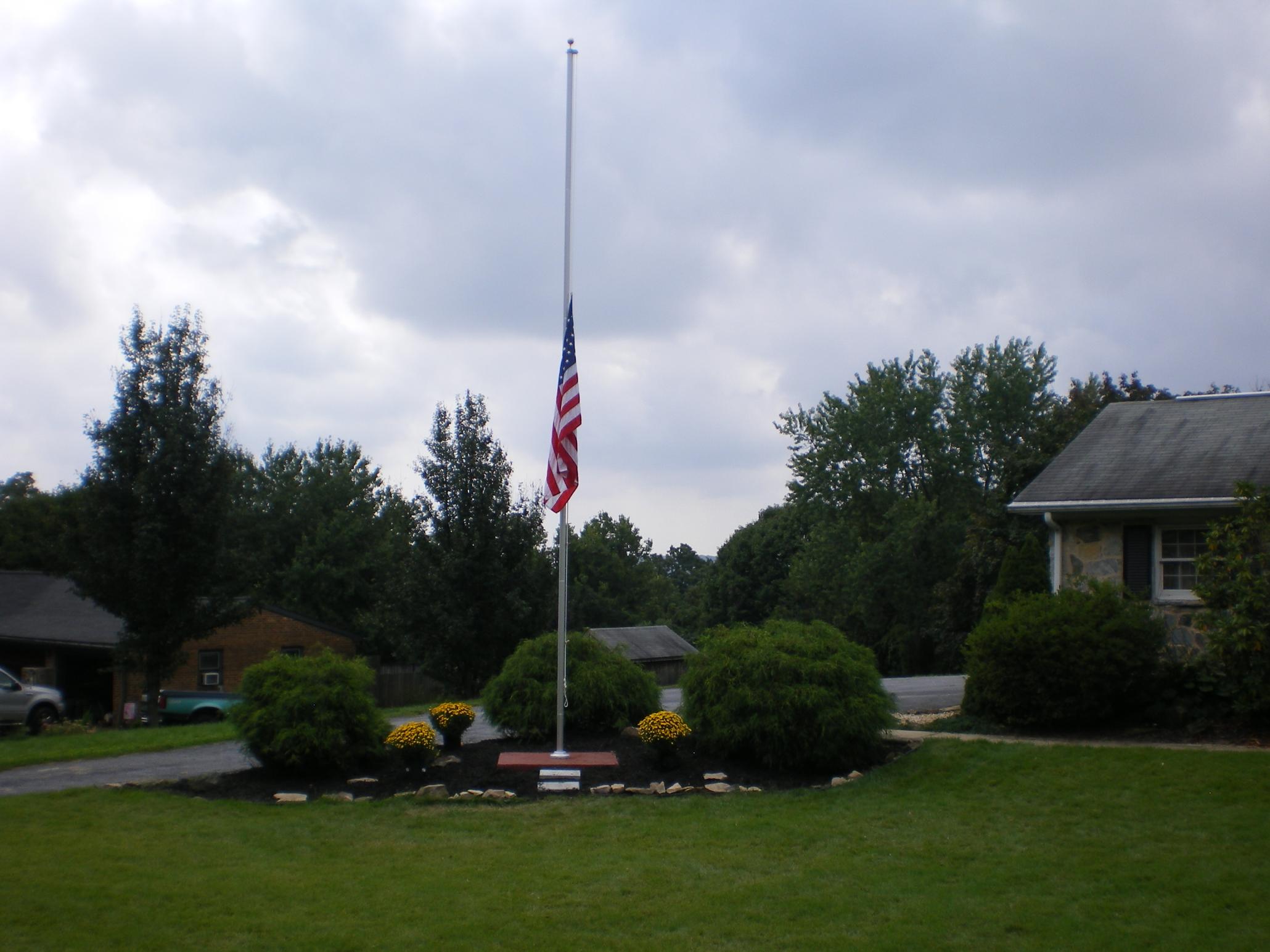 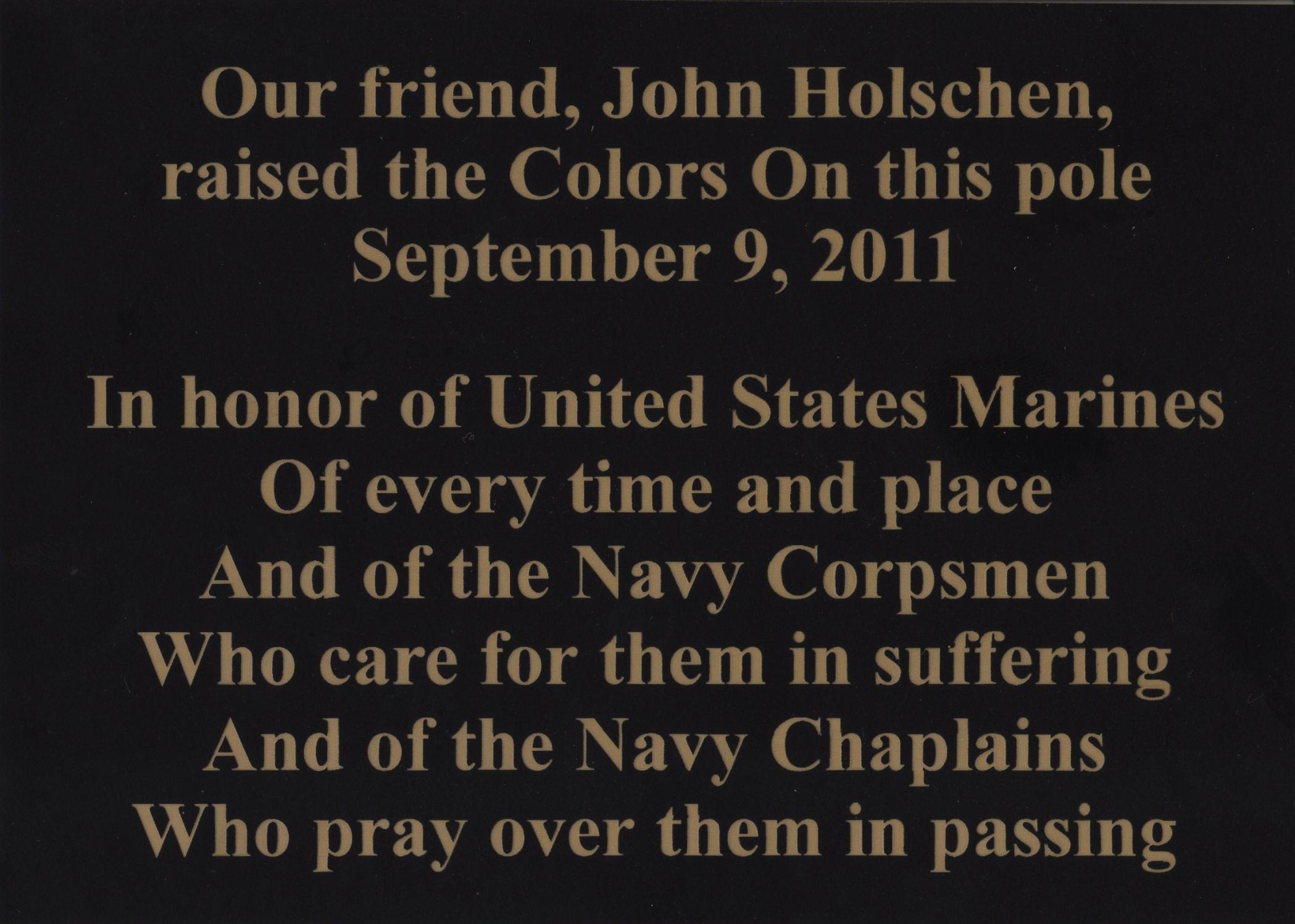 The Plaque Beneath the Flag