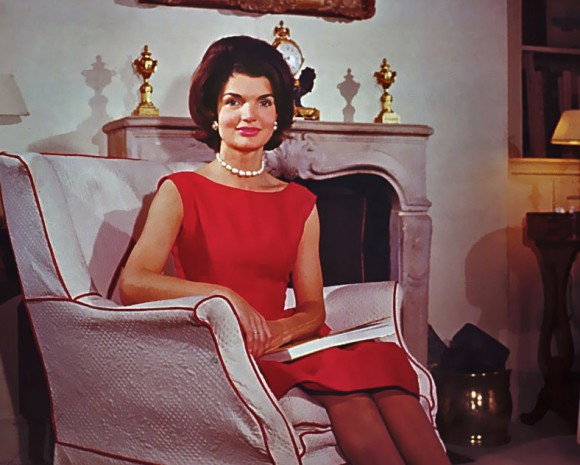 While most of the media have focused on the Jackie Kennedy tapes as they pertain to such figures as Martin Luther King, Jr. and Lyndon Baines Johnson, there are fascinating parts of the conversations that demonstrate the anti-communism of President John F. Kennedy. In this context, Jackie singles out The New York Times for criticism for helping bring Castro to power.

One reason for the lack of attention to these excerpts may be that they shed light on one of the worst performances of the liberal media in the history of journalism. Partly as a result of the coverage of the Castro revolution by Herbert Matthews, the Times correspondent in Cuba, the Cuban people have been saddled with the Castro regime, which once hosted Soviet nuclear missiles targeting the U.S., for over 50 years.

National Review had published a caricature of Castro over the caption, “I got my job through the New York Times,” alluding to how the paper tried to promote classified advertising to job-seekers.

A book by Anthony DePalma, described as the dramatic story of “how a New York Times reporter helped Castro come to power,” referred to Matthews as “The man who invented Fidel.”

Humberto Fontova’s book Fidel: Hollywood’s Favorite Tyrant explains how Matthews’ coverage helped Castro. “This is not a Communist revolution in any sense of the word,” Matthews wrote in 1959. “In Cuba there are no Communists in positions of control.” Matthews added, “Fidel Castro is not only not a Communist, he’s decidedly anti-Communist.”

Jackie indicates that the Kennedys accepted the view of one of their family friends, Ambassador Earl E.T. Smith, that The New York Times and the State Department were largely responsible for Castro’s rise to power and the fall of Fulgencio Batista.

Smith said that the U.S. government facilitated Batista’s downfall by withdrawing support for his government. But Smith also said that “Until certain portions of the American press began to write derogatory articles against the Batista government, the Castro revolution never got off first base.”

Smith said that Matthews’ columns “eulogized Fidel Castro, portrayed him as a political Robin Hood, and compared him to Abraham Lincoln.”

While JFK had no sympathy for Batista, he thought it was “awful” that President Eisenhower, a Republican, had permitted Castro to visit the U.S. after his seizure of power in Havana, said Jackie, going on to cite Smith’s book, The Fourth Floor, on how the U.S. State Department had paved the way for Castro’s takeover. The title is a reference to the officials responsible for Cuba policy who were on the fourth floor of the State Department.

Smith wrote that the Fourth Floor had a “close association” with the Times’ Matthews, “who gave the impression by his editorial conduct of advocating Batista’s downfall.” 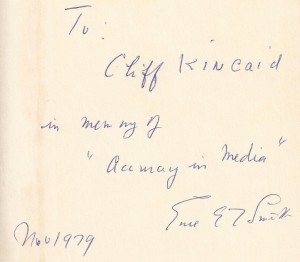 Smith, ambassador to Cuba when Castro took over, spoke at an Accuracy in Media conference in 1979 when Castro’s communist comrades in Nicaragua, the Sandinistas, were threatening a takeover of that country. Nicaragua was Cuba all over again, Smith said.

He signed a copy of his book to this columnist by saying, “To Cliff Kincaid in memory of ‘Accuracy in Media.’” It was a commentary on the failure of the Times to accurately depict Castro as the communist he was and the continuing failure by the media to factually describe the nature of communism and its adherents.

“We knew Earl Smith then, who’d been Eisenhower’s ambassador at the time,” said Jackie in the tapes featured in the book Jacqueline Kennedy: Historic Conversations on Life with John F. Kennedy. “When we were in Florida—that’s all Earl could talk about. Yeah, then Jack was really sort of sick that the Eisenhower administration had let him [Castro] come in and then The New York Times—what was his name, Herbert Matthews?” Jackie adds, “I can remember a lot of talk about it and wasn’t—didn’t even Norman Mailer write something?”

When Schlesinger noted that Smith had written a book about Castro being a communist and working with the communists, Jackie replied, “Yeah—The Fourth Floor? Well, he was always saying his troubles with the State Department—I remember there was a man named Mr. Rubottom he kept talking about. And how hard it was—warning against Castro and how just it was like, I don’t know, dropping pennies down an endless well. He just never could get through to the State Department. So, I suppose he thought he was a Communist, yeah.”

Roy Rubottom was the Assistant Secretary of State at the time of Castro’s seizure of power.

Smith wrote in his book, “It cannot be maintained that the government of the United States was unaware that Raul Castro and Che Guevara, the top men of the 26th of July movement, are Communists, affiliated with international communism. There was ample evidence to that effect. I have shown in this book that it was impossible for Assistant Secretary of State Roy Rubottom, his associate William Wieland, and the Fourth Floor not to be aware of Fidel Castro’s communist affiliations.”

Wieland, the State Department’s chief of Caribbean affairs and a friend of Herbert Matthews, was accused of being a communist agent. Citing Nathaniel Weyl’s book, Red Star Over Cuba, Fontova says Wieland, who had partly grown up in Cuba, had been active in the Cuban Communist Party in the 1930s and had used the name “Guillermo Arturo Montenegro,” an alias he kept secret when he filled out a national security disclosure form. Wieland resigned in disgrace.

Analyzing U.S. policy, Smith wrote, “To make my point clear, let me say that we helped to overthrow the Batista dictatorship, which was pro-American and anti-communist, only to install the Castro dictatorship which was Communist and anti-American.”

Smith noted that, in a national broadcast on December 2, 1962, Castro declared, “I am a Marxist-Leninist and will be one until the day I die.”

Although JFK authorized an invasion of Cuba at the Bay of Pigs in April 1961, Jackie alludes to the failure to follow through with adequate military force. “I mean,” she said, “the invasion in the beginning and then no air strike—half doing it and not doing it all the way…” The result was a slaughter of anti-communist Cubans in the invasion force and a victory for the Castro regime.

President Barack Obama is expected to seek a new base tax rate for the wealthy to ensure that millionaires pay at least the same percentage as middle income taxpayers. The proposal is expected to be unveiled on Monday.

Years ago, don’t think I’m supposed to start off a sentence like that; but years ago a few of my close friends at church would end the Sunday meeting block by saying to each other, “Don’t do anything stupid.” We each knew how easy it was to make mistakes during the work week, so we’d give this light hearted warning to each other. The list of stupid things was wide open to our imagination; much like the scriptures that tell us to avoid sin, just be careful out there.

This afternoon I called one of my old buddies to let him know he should have called this morning with that warning, “Don’t do anything stupid.” He immediately broke into a deep laugh while asking, “Okay, Stern, What’d you do this time?” I then told him and remarked that perfection had yet to grab hold of me as he continued to laugh at such a prospect.

A Ford dealership called me out to make and program a set of keys for a 2001 Mustang which they had sitting on their entry drive. The customer was waiting and a little upset that a Ford dealership couldn’t make the keys; but the car was ten years old and Ford had already dumped the key codes.

Once the mechanical key was completed and turned in the ignition to set up the programming of the new transponder keys, it was determined the battery was dead. Subsequent to hooking up a set of jumper cables from my truck, the after market alarm kicked in; seems the alarm system had been going off for quite some time and drained the battery. The customer didn’t have the clicker and the bypass switch didn’t shut the noise maker off while the programming took place, wonderful!

The customer was present the whole time and watched as I explained how the old key(s) that were either lost of stolen, would no longer be authorized or start that vehicle; she seemed relieved at hearing this information. I then programmed the two new keys and demonstrated that they did indeed start the vehicle; the after market alarm sounding each time the key was turned. I advised her to take the vehicle to where the after market alarm had been installed to acquire another clicker, but she said it had come with the car when she bought it and didn’t know where the alarm had been installed, believing it was a Ford alarm system.

I told her that she could cut the wire going to the sounding horn and still drive the car, but it would be better in the long run to have the after market alarm system removed. I handed the bill to the service writer and got my purchase order.

About half an hour later I got a call, “Who’d you give the keys to”? I’d made sure Not to hand the keys to the lady who owned the car; my customer was the Ford dealership service people, the folks who were paying me. A sinking feeling came over me as I realized the keys were in my pocket and I’d driven ten miles across town. After all these years of training myself to make sure the customer handled the keys last, make sure they felt the key turn in the lock, make sure they liked the job; I still screwed up.

Eating Humble Pie once in a while is healthy for mortals; just wish I didn’t get to eat it quite so often. I suppose I should be grateful, could have been a lot worse; the customer might not have accepted my sincere apology for having done something dumb. Here’s the message, “Don’t do anything stupid,” isn’t a one time reminder.