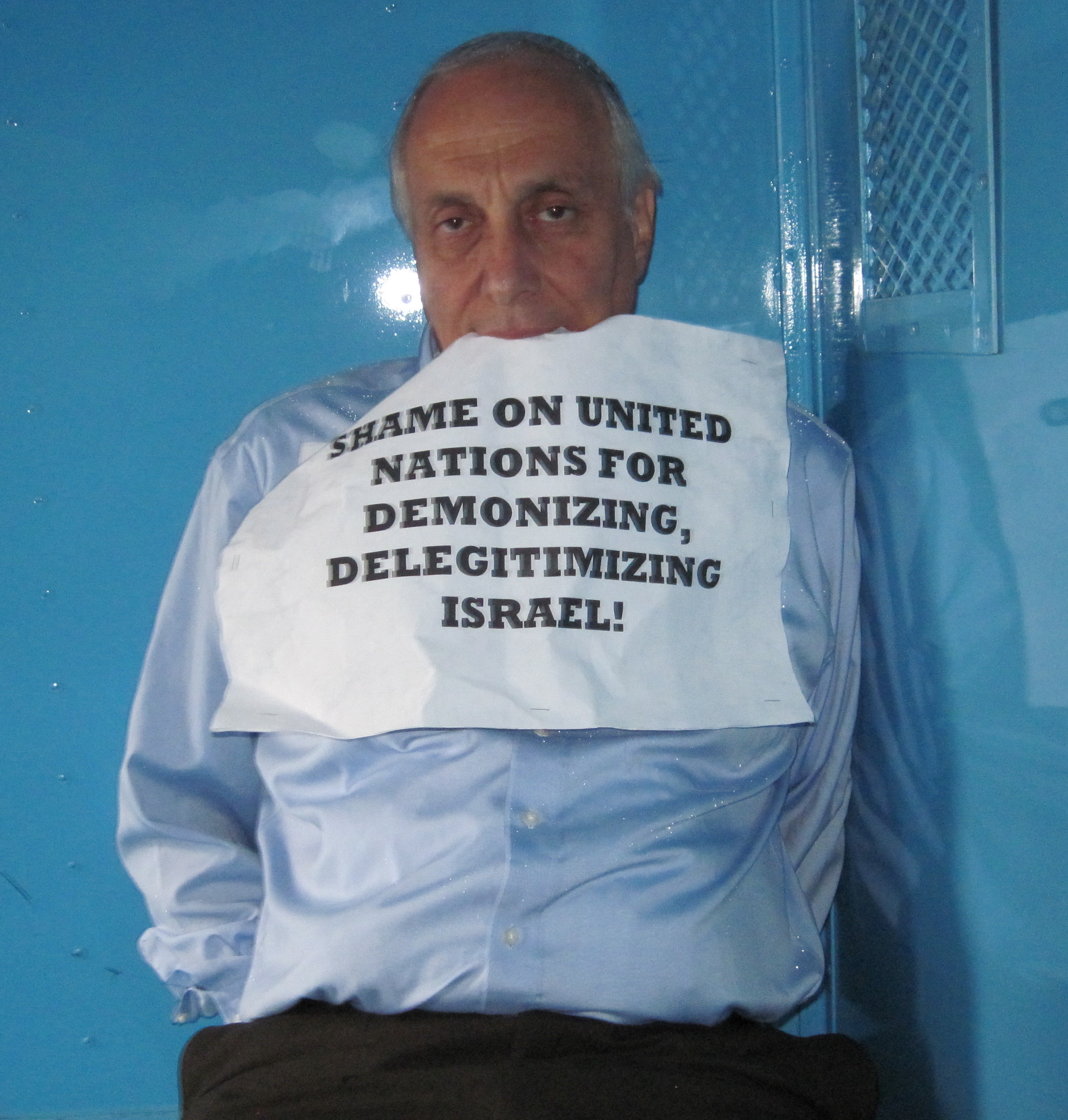 Six Jewish activists including Rabbi Avi Weiss, director of Amcha-Coalition for Jewish Concerns, were arrested on Tuesday morning, September 20th, at the corner of 1st Avenue and East 40th Street, as they blocked traffic in a symbolic protest against the Palestinian bid for independent statehood at the United Nations annual general assembly conference. Their arrest was part of a rally co-sponsored by Americans For a Safe Israel (AFSI) and Amcha that drew over 35 people, many of whom also stood in the street with them.

Pointing to the UN building looming in the background, Rabbi Weiss told the rally attendees who gathered in the heavy rain along with throngs of local and national media that, “Today we are sitting in the street to tell this den of evil that they will be responsible for the violence that will, G-d forbid, take place in Israel as a result of this move to legitimize a state who clearly does not want peace. If the New York City police really “got it,” they wouldn’t be arresting those who represent the Jewish voice of consciousness and those who speak truth to power, but they’d be arresting Iranian president Mahmoud Ahmadinejad who is guilty of murdering countless numbers of his own people and who threatens genocide against the Jewish state.”

Glenn Richter, a former leader of the Student Struggle for Soviet Jewry organization and a leading spokesman for Jewish causes declared, “There can be no business as usual at the United Nations while it continues to demonize and delegitimize Israel, endorse a unilateral Palestinian declaration of statehood and welcome the evil Mahmoud Ahmadinejad”.

Also attending the rally was Rabbi Joseph Potasnik, executive director of New York Board of Rabbis who said, “Given the choice between being part of an immoral majority or moral minority, I’d rather be part of the minority than the majority which meets in the UN and makes Israel too often the guilty party. There’s a Yiddish saying which translates, ‘fear G-d, not people.’ We’re here because of what people may sometimes do to us and that’s why we have to be so vocal.”

Saying that she was mortified by the abject silence of the Jewish establishment organizations in lieu of the impending UN vote to create a Palestinian state predicated on a terrorist doctrine, Helen Freedman, executive director of AFSI and one of those arrested said, “Incomprehensibly, the major Jewish Organizations have chosen to stay away from the battle. Is it spinelessness or mindlessness?”

Turning her attention to the existential threat that a Palestinian state would present for Israel, Ms. Freedman added, Mahmoud Abbas’ unilateral efforts to have a PA state declared at the UN are reprehensible and incredibly dangerous for Israel. Iran’s Ahmadinejad should not be permitted into this country, not in New York City and certainly not in our streets, restaurants and universities, while he is threatening the western world with nuclear war. The Durban III denunciations of Israel should not be tolerated. The entire purpose of the United Nations has been turned upside down.”

Holding aloft large Israeli and American flags and signs saying, “Shame On the UN For Demonizing and Delegitimizing Israel!” and “We Support Israel,” the rally participants chanted “Am Yisrael Chai” (the Jewish people live), as police begand to handcuff and lead the six demonstrators to a nearby paddy wagon. They were brought to the 17th precinct in Midtown Manhattan where they were booked on charges of disorderly conduct.

In addition to Rabbi Weiss, who is also senior rabbi at the Hebrew Institute of Riverdale and Helen Freedman of AFSI, the others arrrested were Cheryl Jacobs Lewin, chairwoman of AFSI’s Chicago chapter who flew in to New York to participate in the protest, Miriam Prince, Sarah Rosenbaum and Glenn Richter. They were represented by attorney Karen Stahl-Don.

Impugning the moral integrity of the Palestinian leadership and agenda was Rabbi Jason Herman of Manhattan’s West Side Jewish Center who said, “A little over a week ago, Noam Shalit, father of Israeli soldier Gilad Shalit, kidnapped by Hamas, spoke to many UN delegations. He said that if you have a state which continues to deny the Red Cross a visit to his son for over five years, what kind of a state will that be? If you have a Palestinian Authority which seeks a unilaterally declared state instead by negotiation, what kind of a state will that be? If Palestinians wish a state, that state must behave with the behavior appropriate to a moral state.”

2 thoughts on “Jewish Activists Arrested Near The UN”